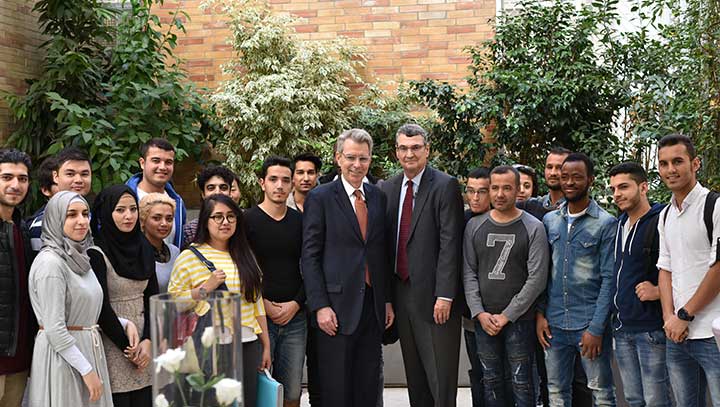 On Tuesday, October 24, the 48 refugees attending the “Education Unites: From Camp to Campus” program at Deree – The American College of Greece, welcomed a special guest at the Downtown Campus: the U.S. Ambassador in Athens Mr. Geoffrey R. Pyatt.

Ambassador Pyatt arrived a while before noon in a crowd-packed campus, where he was received by the President of the American College of Greece, Dr. David Horner. The two men visited the classrooms where the introductory English courses are held and spoke with the 48 students who received the “Education Unites” scholarships.

The refugees had the chance to share their experiences and everyday challenges as displaced individuals but also to express their gratitude for this unique chance they have been given to continue their studies and fulfill their dreams.

“Having left the horror of the war – and all that we have lived for the past two years – behind us, it is very important to be able to dream of a future again” said one Pakistani student. “I am deeply grateful for the chance I have been given to continue my studies and to be able to stand on my own two feet. The war was the worst thing I have experienced. The only thing that interests me now is the future; and for the first time in a long time I can dream of it again” added a young female student from Syria.

Mr. Pyatt, in turn, expressed his pride for this initiative while he assured the students that “this program is only the beginning”. The “Education Unites” curriculum comprises introductory English courses as well as courses in various fields based on the knowledge and professional training of the students.