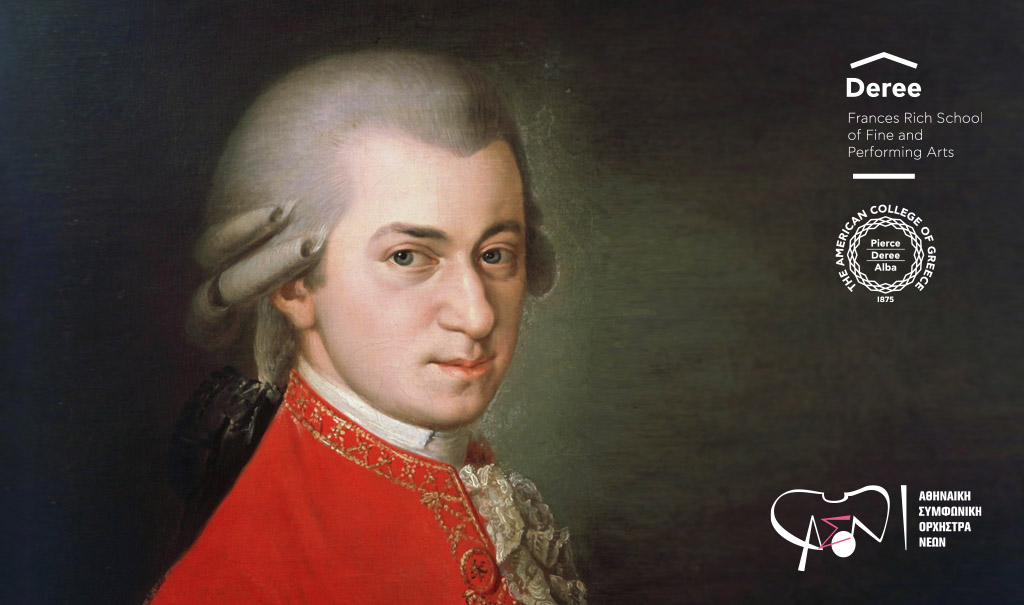 When: Saturday, February 4, 2023 | 18:30 Where: Pierce Theater, The American College of Greece Organized by: The Frances Rich School of Fine and Performing Arts of The

Where: Pierce Theater, The American College of Greece

Organized by: The Frances Rich School of Fine and Performing Arts of The American College of Greece

A concert celebrating the birth of Wolfgang Amadeus Mozart, the greatest musical genius of all times. Mozart’s iconic works will be brought to life in a memorable evening, performed with all the joy and exuberance of talented young musicians.

Dr. Tatiana Papageorgiou, renowned pianist and Deree professor, will introduce the concert, sharing insights about the great master and the music that will be performed.

Young musicians and music lovers are invited to communicate with Dr. Tatiana Papageorgiou, pianist, Deree professor ([email protected]) in order to participate as performers or listeners in the upcoming masterclasses that will take place at The American College of Greece, during the 2023 spring semester.

The event is open to the public, free admission. Parking will be available. 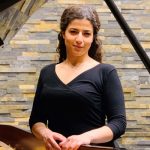 Lydia Iatraki is a young pianist, graduate of Pierce – The American College of Greece (P’13) and Deree – The American College of Greece (D’19).  Lydia earned her BA in Piano Performance from the Frances Rich School of Fine and Performing Arts-Music Department, along with distinctions including the Outstanding Graduating Student Award in Music Performance and the Parallel Studies Award being also a student of Musicology at the National Kapodistrian University of Athens.  Following competitive entrance auditions, Lydia pursued graduate studies at the Royal Conservatoire of Scotland in Glasgow, from where she earned her Master’s degree in piano performance in 2022.  She studied piano with Dr Tatiana Papageorgiou at Deree – The American College of Greece and at Kodály Conservatoire, from where she earned the national Piano Soloist Diploma with the grade ‘Excellent unanimously and First Prize’.  While in Glasgow, she studied in the class of eminent pianist Aaron Shorr.  She has also attended piano masterclasses in Athens with Daniel Blumenthal and Dimitris Toufexis, as well as at the International Mozarteum Summer Academy in Salzburg in the classes of Dina Yoffe, Yafei Chuang and Frank Wibaut.  Lydia has been recipient of important music awards and scholarships including those from the UNESCO Panhellenic Music Competition, the Attica Tradition Foundation, the International Propeller Club and the Royal Conservatoire Scotland School of Music. 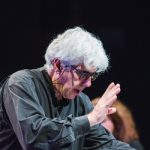 Maestro Sergiou has conducted a large number of first performances of works commissioned for the “New Music Theater” class of the famous composer Mauricio Kagel in Cologne. Until 1993, Mr Sergiou held the post of Musical Director at the regional Saxony-Anhalt Theater, conducting numerous performances of operas, operettas, and symphonic music. While working in Germany, he also conducted concerts and opera performances in Corfu.  Upon his return to Greece in 1995, he has maintained his conducting career along with his pedagogical work. He has conducted the Athens State Orchestra (KOA), the orchestras of the Greek National Radio (ERT), the Orchestra of Colors, the Orchestra of Patras, the Athens City Symphony Orchestra, and the Greek Opera (ΕΛΣ).  In addition to his innovative work with the Athens Youth Symphony Orchestra, he has been a founding member of the Athens Chamber Orchestra, having conducted all its concerts and recordings. Since 2000, he has been the Musical Director of the Athens Orfeio Conservatoire. In the same year he was elected at the Music Department of the Philosophical School of the Athens Kapodistrian University, where he continues teaching today holding the rank of Professor. 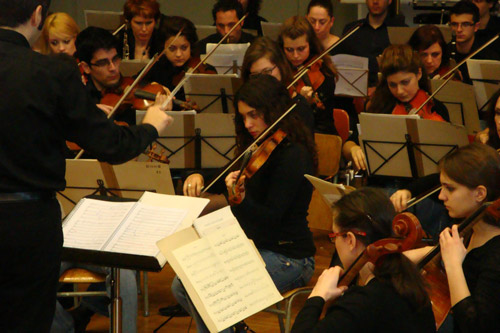 For the third decade, the Athens Youth Symphony Orchestra – ASON (Αθηναϊκή Συμφωνική Ορχήστρα Νέων – ΑΣΟΝ) trains the young and new musicians and introduces them to the great symphonic repertoire.  A great number of musicians among the members of professional Greek orchestras today “learned the job” behind the ASON music stands.  Permanent conductor Pavlos Sergiou seeks systematically the presence of ASON not only in Athens but also throughout the Greek region.  In its short history, ASON can be proud of the large number of early performances of works often written in not easy idioms; for giving over two hundred fifty (250) concerts throughout the country; for its partnership with some of the most prominent Greek soloists; for providing systematic “forum” to young Greek and foreign conductors and soloists, and for its pedagogic work through concerts (of both: the whole Orchestra and various chamber music groups) in schools.

It should be noted that the most enthusiastic founding member of ASON was Mrs. Nancy Bargerstock, distinguished violinist and professor at that time at Deree – The American College of Greece. 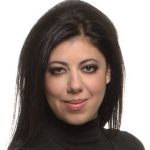 Dr. Tatiana Papageorgiou is a concert pianist with diverse professional activity as performer, arranger, teacher and musicologist. She has been teaching music theory, piano, twentieth-century music and appreciation courses in film music and Greek music at Deree-The American College of Greece, since 1999.  A graduate of the Royal College of Music and the Royal Academy of Music in London, she pursued advanced studies in piano and theory, as a scholar of the British Council, the Greek State Scholarships Foundation and the Royal College of Music.  Her teachers have included the legendary pianists Lev Vlassenko and Yonty Solomon.  Her concert appearances have taken her around the world, including Europe, Australia, North and South America, Africa and China and she has performed as a soloist with orchestras including the London Philharmonic, the Moscow New Opera, the Beijing Symphony, the Warsaw National Opera Symphony Orchestra, the Philharmonic of Central Germany and the Athens State Symphony.  Her groundbreaking doctoral research into the symphonic music of Mikis Theodorakis has resulted in the unearthing of unpublished works, in music editorial work, various arrangements, transcriptions and orchestrations of his works, as well as world first performances and a complete recording of his piano and symphonic music in close collaboration with the composer.  Her recent piano arrangements of Theodorakis’ songs, ballets and film scores have been published by Schott International in 2011 and have been praised by the international press.  Her recent projects include performances of Chopin’s music at Herod Atticus Theater, the Athens Megaron Concert Hall and a tour around Greece.

Queen Olga in pink: On the authorship of a royal portrait at the Benaki Museum 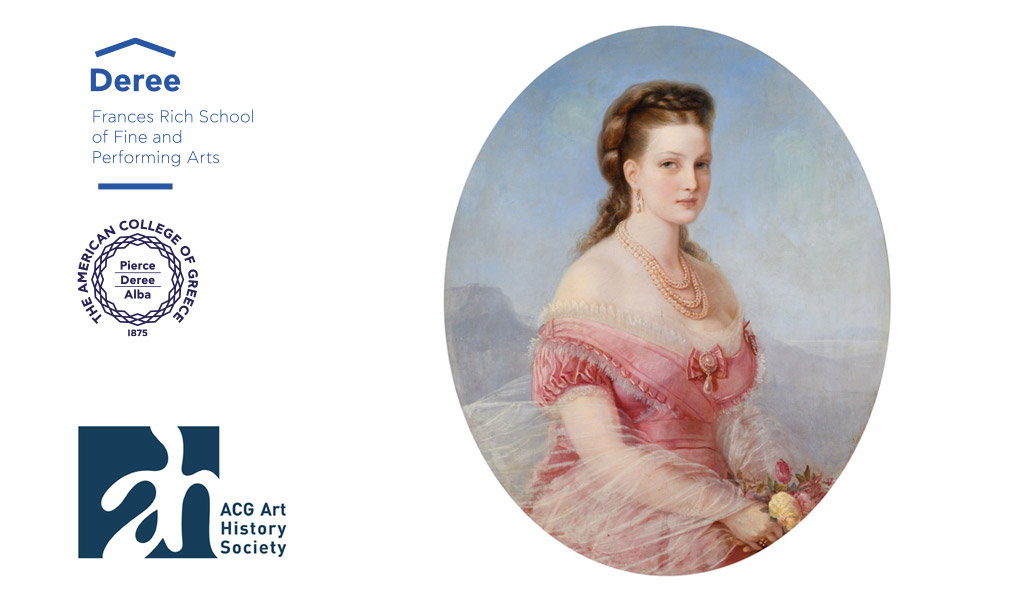 A lecture by Dr George Manginis Academic director of the Benaki Museum When: Thursday, March 31 | 14:10 - 15:20 Where: 6th Level Auditorium Organized by: the Art History Society

Organized by: the Art History Society

A beautifully painted yet somewhat saccharine portrait of young Queen Olga of Greece has been hanging for over seventy years at the Benaki Museum. It was donated by Mary Karolou, daughter-in-law of the Queen’s private secretary and biographer Julia Karolou. Heretofore, the artist’s signature on the portrait had remained undeciphered. Thanks to the portrait’s inclusion in a recent exhibition, an attribution was made possible. This lecture will introduce the exciting life of the artist who painted the rosy-cheeked Queen and will weave together the lives of four women between the 1870s and the 1950s. 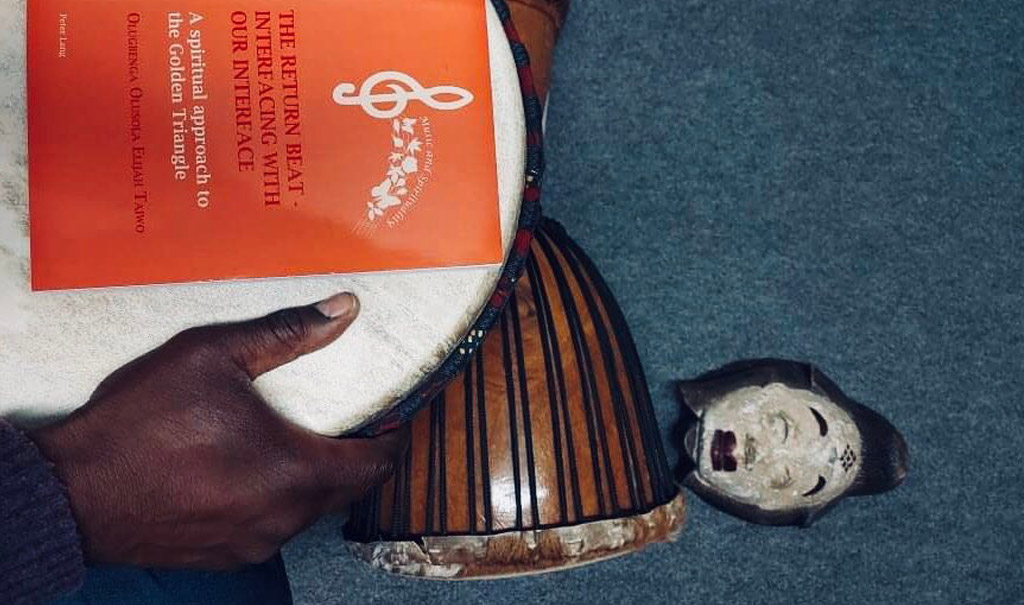 The Return Beat – Interfacing with Our Interface When: Friday 25, Saturday 26 & Sunday 27, February Where: The American College of Greece, Black Box Theatre (and online) Organized by: The Makings of the Actor, Athens,

The Return Beat – Interfacing with Our Interface

When: Friday 25, Saturday 26 & Sunday 27, February
Where: The American College of Greece, Black Box Theatre (and online)

Organized by:
The Makings of the Actor, Athens, Dr Olu Taiwo, Senior Lecturer, Department in Performing Arts, University of Winchester and the Labanarium, London.
The Conference is hosted by:
The Theatre Arts and Dance Department of The Frances Rich School of Fine and Performing Arts-The American College of Greece, with the support of Dr Kiki Selioni, Post-doctoral Researcher, Royal Central School of Speech and Drama, University of London.

In his book ‘The Return Beat- Interfacing with Our Interface, A Spiritual Approach to the Golden Triangle’, Dr. Olu Taiwo coined the term Return Beat referring to a metaphysical experience of West African Rhythm from a performer-centered approach. This approach draws attention to modes of rhythmic perceptions that highlight certain shared resonant experiences in a group that are cyclical in nature. The Golden triangle refers to the use of rhythm through: Song/spoken word, dance/movement, percussion/drumming. It postulates that performances produced with this awareness means that the performer will have to be rhythmically intuitive and display a high degree of self-coordinating intelligence.

Taking The Return Beat – Interfacing with Our Interface as both a framework and provocation, this conference will delve into its various themes and practices, offering a platform for practitioners and scholars to share and reflect on their perspectives on, and insights into, rhythm within acting and performance. Through presentations, work demonstrations and discussions, we will explore common themes and differing understandings and approaches to rhythm in this field.

The event will be held as a Blended (Hybrid) Conference. In recognition of both the global reach of this theme and the expansive network of interested practitioners and scholars, as well as the impact of the current pandemic, participants are invited to take part either in person or virtually. Conference proceedings will be live-streamed; papers, and, where appropriate, workshops and demonstrations, can be presented remotely.

Note
Required for entrance: ID card and a valid Certificate of Covid-19 Vaccination or valid Covid-19 Disease Certificate, as per the latest public health regulations.
The use of a protective mask is mandatory during the entire duration of the event and social distancing (1,5m) must be observed at all times.

The event will also be available Online from the 25th until 27th of February.

Conference Registration fees
All those attending the conference will be given a discount code for use when ordering their own copy of Return Beat.

The whole event is free to the entire Theatre Arts and Dance Faculty and students. Alumni are eligible for 50% discount.