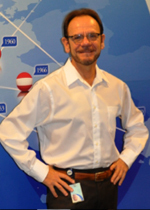 “It’s all about winning!”

PARIS KAFANTARIS was born in 1957 in Athens, Greece. He obtained a Bachelor’s degree from Deree – The American College of Greece and a Master’s degree in Business Administration from Hofstra University in New York. Paris joined Procter & Gamble Greece in 1983 as Ariel Brand Assistant. In 1984 he put a brief halt to his career to join the Greek army for 2 years. He returned to P&G in January 1986. He became Brand manager Pampers-Always in 1987. He was appointed Laundry Marketing Manager for Italy in 1991 where he stayed 3 years, before going back to Greece just to leave again two years later for the UK for a European Strategic Planning Position. Paris became Greece General Manager in 1998. In 2001, he moved to Geneva European HQ as the Marketing Vice President for Western Europe. In 2004 he took on a European and Global role as Baby & Adult Care Vice President. Since 2007 he has been leading the Marketing Function for Western Europe and recently (2014) added Central & Eastern Europe.

Paris is a member of the Detergents Association, of the Fulbright Association of Greece and on the Board of the World Federation of Advertisers. Paris retired from P&G in 2016 and is now a consultant/entrepreneur.

Playing Basketball with Deree versus the Greek national team.

Mr. Lyras, who was at my time really innovative with computer science.

Doing things out of the ordinary.

It’s all about winning!