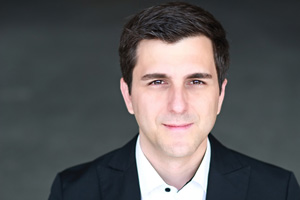 “If I can leave this world even a bit better than I found it, then mine is a life worth living.”

PANOS KARAN (Panayotis Karanikolos) was born in Chania, Greece and graduated from PIERCE in 2000. In high school, he proved to be an all-around prodigy with a special affinity for music and sports. He is a pianist, conductor and humanitarian whose ideas are fast shaping the understanding of classical music in the 21st century.

Born in Greece and educated at the Royal Academy of Music in London, Panos has taken music from the world’s top concert halls into the Amazon jungle, to the most impoverished districts of Kolkata, to prisons of war-torn Sierra Leone, and to the evacuation centers of post-tsunami Japan.

Most recent performances include four solo recitals at Carnegie Hall, New York, Symphony Hall, Boston, Queen Elizabeth Hall, London, Suntory Hall, Tokyo, Sydney Opera House and Tokyo Opera City, at the presence of Empress Michiko of Japan. In September 2010, Panos founded the charity Keys of Change, helping bring music to young people living under extraordinary circumstances around the world. In 2014 he founded the Fukushima Youth Sinfonietta in Japan, and in 2019 the Accra Youth Sinfonietta in Ghana and the Chennai Youth Sinfonietta in India. He has recorded Rachmaninov Piano Concerto No. 3 and the 24 Chopin Etudes in a live recital at London’s Cadogan Hall.

My first recital in the PIERCE theatre during Open House, when I was 14.

Sneaking into the theatre during lunch break in order to rehearse, playing on one of the best pianos available in Greece – a Steinway grand.

A tiny corner behind old sets in the backstage area of the theatre.

I am in touch with several friends from the athletics team. I am also still very good friends with a classmate I met on the first day of school while waiting for the bus to PIERCE.

Pierce has been my home since I was 12 years old and it still is up to this day. Not only have its doors been open for help and advice after graduation, but also I am particularly proud that ACG was by my side for my Carnegie Hall debut.

Traveling and being in a new place that challenges me.

If I can leave this world even a bit better than I found it, then mine is a life worth living.