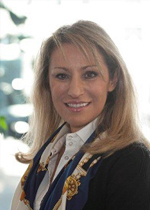 HIRO ATHANASSIOU graduated from The American College of Greece, with a postgraduate degree in Economics from the London School of Economics.

Hiro has a long career at Unilever, in different roles and regions. In her last years with Unilever abroad, she had the role of Executive Vice President Operations for Latin America, South-Eastern Europe, Turkey, Israel and Russia, as well as Member of the Global Executive Board of Unilever Food Solutions. She returned to Greece to take the role of the Executive Vice President and CEO for Greece & Cyprus, while she was also member of the European Leadership Team.

During the last 10 years of her career, she also served as an Independent non-executive Director and member of various committees in Pireaus Bank and TITAN Cements International Company. She was also board member in several institutions and industry associations, like SEV (Hellenic Federation of Enterprises), IOBE (Institution of Economic and Industrial Studies), the Greek-Dutch Association, and other Sectorial Associations.

Presently, she is an independent non-executive Director for HCAP, the Hellenic Corporation of Assets and Participations. In this capacity, she has taken roles as member of various Board Committees, like the Nomination and Remuneration Committee, the Corporate Governance, and the Audit Committee. She is also advisor to Symbeeosis, a Greek organic food start-up. She is also co-chair of the Global Alumni Advisory Board (GAAB) of The American College of Greece.

Hiro has also worked with Orange Grove of the Dutch Embassy in Athens for mentoring female start-ups and she has also been a mentor for the Women on the Top NGO.

At this stage of life, you don’t think about “lessons to learn” you just learn and embed in an unconscious way.

Q.: One of your favorite PIERCE memories?

Lunch breaks with rolls with cheese and ham.

Yes, with many of them

Q.: Did having studied at PIERCE help you during your university studies and beyond?

Can’t remember of a specific motto, but a school is the place where you get trained for life. Together with family, it is the foundation upon which you build your life.

Q.: Who inspires you most?

In relation to PIERCE: The liberal atmosphere and free flow of ideas, inspired me more.
In general: People who dream that the world can be a better place for everybody, mostly would fight for this!