An open lecture by:

Marietta Papadatou-Pastou
Assistant Professor in Neuropsychology in the Department of Primary Education, National and Kapodistrian University of Athens

Where: Online via Zoom

The two aspects of behavior specific to humans, the use of language and the strong population-level preference for hand use, are both asymmetric, lateralized traits. When it comes to language, the majority of humans are left-hemisphere dominant for language functions, while the right hand is the preferred hand for over 9 out of 10 individuals; a pattern far from negligible.

In this talk, Dr Papadatou-Pastou will present her work in the field of laterality, focusing on handedness and brain laterality (also known as brain asymmetry, hemispheric dominance, or hemispheric specialization). She will take you through a journey of findings using meta-analytic methods, as well as brain imaging using functional transcranial Dopper ultrasound. She will address questions pertaining to sex differences in handedness, handedness patterns in populations with special education needs, and brain laterality during writing.

This endeavor, apart from its intrinsic interest, gains importance from the fact that the study of handedness and language lateralization contributes to the broader question of individual differences in brain organization and abilities. Such differences are of key importance to psychiatric, neurological, and neuropsychological research and practice as well as to the study of the genetics of asymmetry. 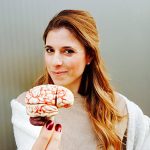 Marietta Papadatou-Pastou is an Assistant Professor in Neuropsychology in the Department of Primary Education at the National and Kapodistrian University of Athens. She holds a DPhil in Experimental Psychology and an MSc in Research Methods in Psychology, both from the University of Oxford as well as a BSc in Psychology from the Panteion University, Athens. She is an Associate Fellow of the British Psychological Society (BPS), a Chartered Psychologist by the BPS and a Chartered Scientist by the BPS and the Science Council UK. She has served as the Secretary General for the Hellenic Psychological Society (HPS; 2017-2019) and she is a co-director of the Neuropsychology Branch of the HPS since 2017. Dr Papadatou-Pastou’s research interests include various aspects of neuropsychology, as well as cognitive neuroscience and experimental psychology. Her work focuses on handedness and brain lateralization, using behavioural and brain imaging techniques (functional transcranial Doppler ultrasound, fMRI), in healthy individuals as well as populations with special education needs (students with dyslexia, hearing impaired students, students with low or IQ and individuals with autism spectrum disorder). She is further interested in research methodology with a special focus on meta-analysis. She has published papers in journals such as the Psychological Bulletin, NeuroImage, Neuroscience and Biobehavioral Reviews, Nature Human Behavior, Scientific Reports, and Neuropsychologia. Last but not least, she is interested in science outreach.