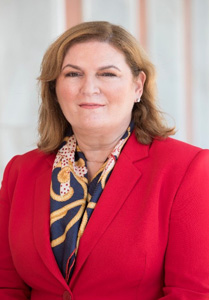 KONSTANTINA (DINA) VITORATOU was born in New York and graduated from Deree in 1987 with a degree in Marketing Management.  She also holds an MSc in Public Administration from Troy State University, USA. She began her banking career in 1985 at American Express and Merchants National Bank and Trust Company. Later she worked for Dutch ABN AMRO Bank NV in the retail and leasing units. She was General Manager for National Bank of Greece’s (NBG) subsidiary Ethnokarta and headed NBG Group’s International Retail Banking Division for the subsidiary banks in S.E. Europe, Cyprus and Egypt. In March 2012, she undertook the role of NBG Ombudsman for the bank and subsidiary insurance company Ethniki Asfalistiki.  She has served on various boards, such as the board of Mastercard Europe, NBG supervisory councils for Egypt & Albania, and Action Plan S.A. In 2017, Dina joined Eurobank, as Head of Group Operational Risk Sector.  She is married and has one daughter.

Being at that carefree age when you’re an adult, feeling that everything is exciting and new, without having yet accumulated that many responsibilities.

The cafeteria since it was a fun place to be and the best place to connect!

Professor Tsikalakis. By attending his Marketing Management courses and by conducting business cases we were able to transfer our theoretical knowledge to practice.

Yes, some friendships have flourished. It is impressive how often, through business interactions, you run into DEREE graduates.  It feels great!

It allowed me the opportunity to combine education and employment, thus starting professional development early.

You are judged at all times.

Successful leaders/managers who have managed to maintain their ethics.