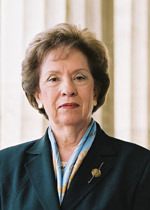 ANNA BENAKI (PSAROUDA) was born in Athens in 1934 and graduated from Pierce in 1952. She studied law in Athens (1952-1957), did post-graduate work in criminal law in Germany and received a Ph.D. from the University of Bonn (1962). Back in Athens she practiced law 1962-2002 as a member of the Athens Bar Association, and was an associate and later full professor (1972-2002) of criminal law in the Law School of Athens University. She was involved in politics since 1981 with the conservative New Democracy party, and she was elected to Parliament from 1981 to 2009, representing central Athens. She served as minister of culture (1990-1992), minister of justice (1992-1993) and in 2004 she was elected the first woman president (speaker) of the Hellenic Parliament, a position she held until 2007. Anna Benaki has also served as a legal expert for the EU Charter for Fundamental Rights and has been a Member of the Council of Europe Parliamentary Assembly (2007-2009). In 2010, she was elected a full member of the Academy of Athens. She has published several books and numerous articles and she is editor-in-chief of the oldest Greek Criminal Law Review.

To support my position with firmness.

In my time, a pioneer school in education and in training in democracy.

The balcony with the view of the sea.

With many, in yearly class meetings.

Enormously! It especially helped my way of thinking and making research. And, of course, the good Greek and English I learned were an enormous help.

Q.: What's the greatest piece of advice you've ever received?

Think before you speak.