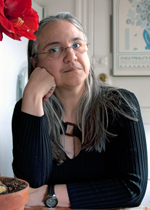 Dr. ATHENA ANDREADIS is a molecular biologist, distinguished both for her scientific achievements and her creative talent. After graduating from PIERCE, Athena Andreadis earned her BA (magna cum laude) from Harvard University and her Ph.D. in Molecular Biology from the Massachusetts Institute of Technology. During her 30-year academic career she fulfilled many roles, from extensive basic research on brain function to mentoring scientists at all stages of their academic careers and from presenting science to NASA engineers to making the universe comprehensible to science fiction authors. Until mid-2013, Athena was Associate Professor of Cell Biology at the University of Massachusetts Medical School. She is a published author of popular science books (To Seek Out New Life: The Biology of Star Trek) and prose and poetry. She is also the engine behind The Other Half of the Sky, an anthology of original space opera that changed the landscape of science fiction. Since 2015, Athena has been the chief astrogator of the tiny but indomitable and highly acclaimed indie press, Candlemark & Gleam. It focuses on eliciting and nurturing literary-quality speculative fiction. Her research has contributed significantly to understanding the genetic regulatory mechanism responsible for dementia. At the same time, her writings on science and speculative fiction introduce the wonders of the universe to broader audiences, illuminating the beauty and power of science.

I went to PIERCE during the military junta; at that time, Greek women were de facto and de jure second-class citizens. At the same time, PIERCE was an elite school and all secondary schools in Greece were gender-segregated. So we didn’t have to play dumb to appease or attract boys, nor did our teachers neglect us in favor of boys (though the dreaded, dreadful “Home Economics” class did briefly raise its obligatory head.) In this context, here’s what I learned from PIERCE: my instinctive hunch that women are full humans (for both good and ill) got embedded in granite; I got my first taste of US cultural parochialism from some of the exchange teachers who taught us English; and I received rigorous training in shaping my dreams into reality.

Q.: One of your favorite PIERCE memories?

Doxiadis had originally designed the PIERCE building for Egypt – all glass and open spaces. Up there on the slopes of Hymettus, our legs froze in winter but trousers were a no-no – couldn’t usurp sacred masculine prerogatives! One bitterly cold day, I came with trousers underneath the uniform skirt. When the inevitable call to the principal’s office came, I pointed out that trousers weren’t explicitly forbidden; skirts were compulsory and I was wearing one. I was the best student in the school, so they gave in. And a few other brave souls started following my lead when the cold bit too hard.

I miss the fierce focus and the sense of many possible futures unfurling. I wrote a poem about the folding of that lovely fan of many choices: “Mid-Journey.”

There was a way to climb up the mountainside, to the deck of the house of a PIERCE top administrator. The view was spectacular, and I liked seeing everything while being unseen myself (the same reason why I always sat at the very back desk, which also allowed me to read outside books and texts while feigning rapt attention to things like religion class – a loner’s feral habits).

I liked too many to select just one; I also disliked a few. What I liked overall is that they were aware enough of their value to remain opinionated while delivering the required curriculum – and aware enough of our potential to treat us, for the most part, like adults (though I had to mount a campaign to gain unrestricted access to all sections of the school library).

I have, despite the constraints imposed by my physical distance.

Q.: How did PIERCE help prepare you for your professional life?

It gave me an unusually high-quality education (I took advanced courses at Harvard in my first year without a hitch) and an unshakable sense of self-worth and self-respect.

I never listen to advice unless it’s entirely concrete (shift car gears like this… repair centrifuge belt like that…) I ascribe my greatest successes – and greatest failures – to that attribute.

Q.: Who inspires you most?

The concept of shaping the dark – central to both science and art. I write about this in more detail in my award-winning essay “The Double Helix: Why Science Needs Science Fiction.”