The 1st Pierce Homecoming Reunion on September 28th, 2019 was a success! The Classes of ’49, ’59, ’69, ’79, ’89, ’99, ’09 and ’19 gathered at the Pierce campus and revisited their old classrooms, connected with classmates and professors. This Homecoming was different than other reunions we had before, it was a full day celebration and had a little bit of everything: Masterclass Presentations by Pierce & Deree Alumnae, Class Activities, Pierce Club Showcases, Cocktail Reception, Memory Lane, Reconnections and more.

The first part of the Homecoming was dedicated to the Classes of ’49, ’59 and ’69. The alumnae were not only amazed by the school and its facilities but enthusiastic about seeing old friends. Students and Professors of the Sunny Days magazine team prepared a “trip down Memory Lane” exhibit and interviewed our Alumni throughout the day. The alumnae gathered at the Theater and were welcomed by ACG President, Dr. David G. Horner, Pierce Principal, Eric Trujillo, as well as Executive Director of Advancement-Alumni, Maria Laina. Former professors, Hara Tzavella and Rena Psaltidou, spoke about their school experiences. Alumni from each year reminisced about their school days: Mina Katsareli (Pierce ’47 & Pierce Upper ’49), Baidsar Mardikian-Gazerian (Pierce ’48 & Pierce Upper ’59), Margarita Triantafilopoulou-Barzoka (Pierce ’59) and Louka Katseli (Pierce ’69). The first part ended with a performance from the Pierce folk dancing troupe. The festivities continued with a different campus tour, including the IB student exhibition, given by the Pierce Student Ambassadors and ended with a buffet luncheon at the Pierce cafeteria. It was a day to remember!

The second part of the Homecoming welcomed the Classes of ’79, ’89, ’99, ’09 and ’19. Dr. David G. Horner, Eric Trujillo, Maria Laina and professors Georgia Marketos and Panagiotis Vasilopoulos greeted the alumni. The Pierce Music Club played a rendition of “Hey Jude” while Pierce student, Evelina Antemissari, gave a wonderful piano recital. Masterclass series on the topic of “Well-Being” were presented for those alumni who had signed up and showcases from a variety of student group projects were gathered around campus for all alumni to view up close. Fundraising activities, such as donation boxes and T-shirt sales, were available in support of the Pierce scholarship fund. The culmination of the Reunion was the cocktail reception where alumni gathered to drink, eat and dance at the Pierce Theater Patio. The alumni not only reconnected with old classmates and professors but had the opportunity to network and meet other alumni from different graduating classes.

On behalf of The American College of Greece, we would like to thank all of the reunion class committees involved and, in particular, the Class of ’89 Committee for their hard work, enthusiasm and dedication. Many thanks to Bessy Arvanitaki, Christina Varveri, Vivian Theodoropoulou, Elena Daskalopoulou, Christina Kolombou and Vania Papakonstantinou. Continuing with the Class of ’89, we would also like to thank Salomi Stavridou for her donation of Kayak ice cream, Orsalia Partheni and Tina Stathopoulou, who pledged to donate a percentage of their T-shirt and book sales, respectively, to the Pierce Scholarship Fund. To the volunteers from the Class of 2019, thank you for your hard work and effort. A warm thank you to our Masterclass presenters: Katerina Soldatou, Dr. Zeta Polymenea, Dr. Persa Kyvelou, Katerina Triviza, Elena Daskalopoulou and Christina Karampoula. We would also like to thank the following professors for their contribution of time and energy at the Homecoming Reunion: Katerina Tsioufi, Ioannis Zaharias, Sophia Dimopoulou, Maria Korda, Evangelia Niadas, Maria Lada, Christina Koronaiou, Stylianos Katsoulis, Fotis Katsochristos, Dora Panagopoulou, Orestis Hatzinakis, Fern Deliyiannis, Ginny Deligiannis, Christina Chryssaki, Lucy Hudson-Christidis, Dimitris Ioannou, Maria Salliari and Dafni Vlachantoni. And to all Pierce graduates of the Classes of ’49, ’59, ’69, ’79, ’89, ’99, ’09 and ’19, we warmly wish you the very best in all your future endeavors! #ACG Alumni We stay connected!

Pierce Class of 1998 Reunion: A sharing of memories and good will (show)

More than ninety 1998 Pierce class alumni returned to their high school alma mater on December 21, 2018, to celebrate the 20th anniversary since their graduation. At the joyous event former classmates reunited, celebrated their friendships – past and ongoing, and recalled memories of the campus where it all began.

Prior to a sumptuous buffet dinner, the Pierce Student Ambassadors offered a tour of the secondary school campus, featuring the many changes and additions to the facilities. These included additional classrooms, new labs, athletic accommodations, and an introduction to the new and burgeoning IB program!

The tour ended in the auditorium, for a class photo and an emotional shout-out with hands raised high. Back at the dinner venue, class members took nostalgic selfies and group photos –not without a few smiles and tears. Though it had been 20 years since many of the class had reunited, there was no shortage of memorable school stories and joyous reflections upon key years of development.

Ms. Laina extended her appreciation to the class and their professors for honoring the High School with their presence. A brief announcement followed describing ACG’s ambitious strategic plan and campaign, “ACG 150: Advancing the Legacy; Growing Greece,” in anticipation of the 150th anniversary of The American College of Greece.

As the College approaches this landmark point in its history, it aims to materially impact the Greek economy through a series of strategic initiatives. The plan triangulates Greece’s greatest economic opportunities with the College’s greatest strengths. As the institution seeks the support of alumni and friends to continue evolving, and to produce graduates who will succeed in Greece and beyond, the role of the alumni is a vital and important one.

Addressing the guests following Ms. Laina’s message, were alumni Yannis Vatopoulos, Professor George Tziros and former Professor Pericles Fotopoulos. Each extended their wishes to the Class of 1998 and gave them a heartfelt address on the importance of past associations. They stressed how lifelong academic fellowship can continue to impact personal and professional development.

On behalf of The American College of Greece, we wish to thank Class Committee members, Yannis Vatopoulos, Maria Edipidi, Daphne Vlachantoni and Nikos Artavanis for their efforts in making the night’s event a success. And to all of Pierce Alumni of 1998, the Office of Development and Alumni Relations warmly wishes the very best in all their future endeavors, both social and professional. It was clear from the hugs, laughs and tears by those in attendance, that there is nothing better than having friends for life, and a school to love!

Celebrating ten years from their graduation, the Pierce Class of 2008 were back on campus, December 20, joined by several of their former teachers to take a trip down memory lane together.
Pierce ambassadors greeted the 100 alumni, who enjoyed a welcome drink, followed by a stellar reception in their honor.
The festively decorated Pierce Theater played Christmas music, while a crackling fire displayed on its big screen and warmly welcomed the guests of honor, who took to the stage to share their memories and news.

In her greeting speech, Ms. Maria Laina, Executive Director of Development and Alumni Relations at The American College of Greece, paid tribute to the “high-achieving Class of 2008,” and welcomed them back to school on behalf of ACG President Dr. David G. Horner, Pierce Principal Eric Trujillo, and ACG’s Vice President of Advancement Alison Townley.
“Through this reunion, we hope that you will have the opportunity to reconnect not just with your former fellow students, but also with your school,” Ms. Laina told the Class of 2008, adding, “it’s so important that you stay in touch, so that we learn of your news and successes, and that you stay informed about school events, new initiatives, partnership opportunities like the internship program, and job opportunities through the alumni network – all of which you can find in the newly-launched ACG Connect alumni platform.” She also thanked three 2008 Pierce students, Nikos Koskinas, Giannis Diakogiannis and Nestoras Andredakis for “their invaluable support in tracking down members of the Class and bringing them together.”

Mr. Drakopoulos said it was an “honor” for him to be asked to speak at the event, and remarked that “you learned from me, but I also learned a lot from you. You graduated at a difficult time for Greece, but it is also a challenge for you to meet, that is to contribute to the revamping of the country.” He urged his former students to always be collegial with one another and reminded them of an ancient Greek saying, “Luck is kind to those who dare.” On his part, Mr. Diamantis noted that it was a “joy and honor” to be on stage greeting his former students, and that seeing them brought back memories from over ten years ago, while he exclaimed how “proud I am of you students for following your goals; some are still finding your way, but have faith – you are armed with everything you need to succeed.”

Next up, former student Georgos Alexandris thanked his teachers, and Pierce, on behalf of the Class of 2008, for “instilling wonderful values and skills to make things happen in our lives,” adding that he was “always happy to go to school,” while noting how deep the bonds are between his fellow students. “For me, this school is family,” another former student, Nikos Koskinas, told the audience, who broke out in cheer.

After taking group photos on stage, the Pierce ambassadors took the alumni on a campus tour, where they got to see their old classrooms, but also the new campus additions, such as the new state-of-the art labs, sports facilities, and IB program area. After taking photos in their old classrooms, the tour ended at the Cafeteria, where students were able to celebrate their reunion with food and drinks, dancing the night away.

It was a pleasure to catch up with the Pierce Class of 2008. Good Luck in all you do! 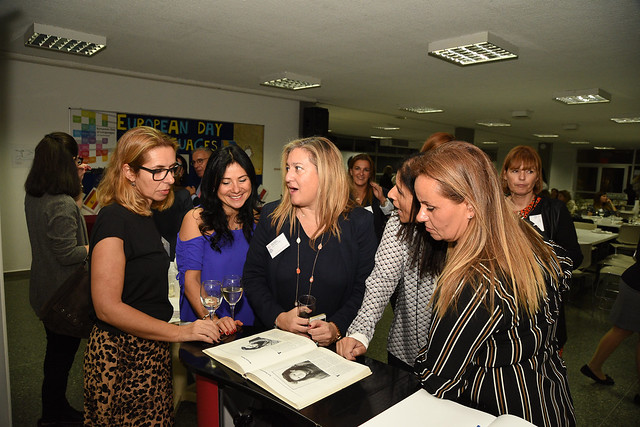 Pierce Class of 1988 Reunion; An evening to be remembered (show)

More than one hundred 1988 Pierce class alumnae came back to school, for their 30thanniversary on October 4, 2018. Classmates reunited, celebrated their friendship, and recalled memories of the past at the place where it all begun.

The classmates were warmly welcomed back to their School by Ms. Maria Laina, Executive Director of Development and Alumni Relations, as well as by their former Pierce professors: Ms. Sofia Antonopoulou, Ms. Dimitra Giannopoulou, Mr. Periklis Fotopoulos, Ms. Georgia Marketos, Mr. Dimitris Kaloulis, Ms. Daliani Panaitsa and Ms. Gini Deligiannis. Ms. Laina extended her appreciation to the class and their professors for honoring the School once again with their presence. She also briefly referred to ACG’s ambitiousstrategic plan and campaign, “ACG 150: Advancing the Legacy; Growing Greece”.

As the College approaches its 150thanniversary, it aims to materially impact the Greek economy through a series of strategic initiatives. The plan, developed in collaboration with McKinsey & Company, triangulates Greece’s greatest economic opportunities with the School’s greatest strengths. As the School seeks the support of alumni and friends to continue evolving and to produce graduates who will succeed in Greece and beyond, the role of the alumni is an important one.

Mr. George Tziros, currently a professor at Pierce, warmly welcomed the class alumnae who were his students during his initial academic year at Pierce, and talked about the School’s evolution and new initiatives. AlumnaeXenia Lamnatou, Mara Chrysovergi, Anastasia Dimitriou, Dora Economou,andYanna Tzanidaki,in an emotional address,reminded their classmates of their love for their School, but also of the impact it had on their personal and professional development.

The Pierce Ambassadors offered a tour of the School and the alumnae were amazed by the many changes, namely in the classrooms, labs, athletic facilities, but also at the introduction of the new IB program! The tour ended at the Cafeteria, where a delightful reception took place. The alumnae were excited and emotional. They took many photos, laughed, danced, laughed again, and did not stop smiling! Many years may have passed since graduation, yet the happy memories never wear out.

The response of the alumnae made it clear; there is nothing better than having friends for life, and a school to love!We wish the Pierce Class of 1988 the best!