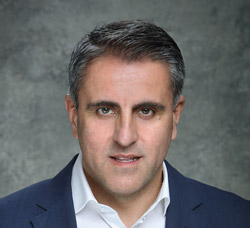 CHRISTOS LATOS is the Deputy CEO at Ogilvy Greece. He has been with Ogilvy for the last 16 years, contributing to the company’s success of being the most awarded agency in Greece, with awards in international festivals such as Cannes, One Show, Clio, Effie, etc. and produced some of the most pioneering campaigns.

Before Ogilvy, Christos worked as a Marketing Manager for HellasNet, the Interactive Marketing unit of FORTHnet. He has been the Country Manager and co-founder of Vatera S.A., an internet startup focusing on online auctionsChristos worked in New York for Planet Leap, an agency specializing in globalization of marketing communications, for accounts such as Apple, Motorola, Adobe, Travelocity.com.

He graduated from Panteion University of Athens with a BA in International Relations and from Emerson College in Boston with an MA in Integrated Marketing Communications. He has been on the Board of Directors of the Hellenic Association of Communications Agencies (EDEE) and the Board of Interactive Advertising Bureau (IAB Hellas).

He is fluent in English and proficient in Spanish. He enjoys sports such as football, basketball, tennis, skiing, swimming.

Christos is married to Mimi and is a proud father of Fey and Paul.

Our senior year class trip to Corfu!  What happened in Corfu stayed in Corfu.

Being with my best friends everyday.

The restaurant and the gym.

Mrs. Daliani! Because I love gym.

With just a few but good friends.

Sure. It was not only the level of the education but also the whole experience of such a great school that helped.

Do the good thing and it will get back to you at some point.