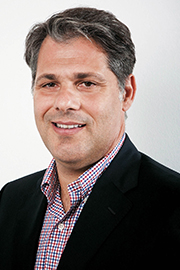 “Treat the others the way you want to be treated”

Makis has a 23-year track record with Johnson & Johnson, having joined the company in Greece in 1995 as a Brand Manager on NEUTROGENA®. In 2004, he was appointed Marketing Director in Spain for the Mass Market Business, and in 2007 moved to Italy as Pharmacy Business Unit Director and AVEENO Franchise Director.

In 2008, Makis was appointed General Manager for Romania, with a strong focus on growing market share in the Mass and OTC categories.

In February 2010, Makis returned to Greece where he was appointed Managing Director, and from there he increased his span of responsibility to include the South-East Europe Cluster and the Balkans. Here he led the cluster through the most challenging financial crisis of modern Greek history, not only delivering against targets, but also driving share growth.

In August 2015 Makis relocated to South Africa to take up the position of Area Managing Director, South Africa & Sub-Sahara Africa, where he successfully led the organization through a slow-down in the economy and driving growth in the Sub Sahara and Africa Region.

Makis’s next move was effective September 2017 when he relocated to the United Arab Emirates and took on charge of the entire AMET Region (Africa, Middle East and Turkey) as the Area Vice President, managing a big geography with very different cultures and backgrounds.

Makis holds a degree in Business Administration and Economics from The American College of Greece, as well as an MBA from Campbell University, North Carolina, USA. He is a member of the AMCHAM and President of the OTC Association & ECR (Efficient Consumer Response) in Greece.

Q: Which three words would you choose to describe Deree?
Solid education, teamwork, prepares you for success.

Q: What are three enduring values you learned at Deree?
Collaboration, teamwork, diversity.

Q: Looking back, how did your time at Deree help you become the person you are today?
Deree taught me to always be ahead, to listen in order to understand, to embrace change and adapt, to do things differently and be innovative; most importantly, it taught me accountability, teamwork, to be humble and to lead by example. Furthermore, the diversity of my peers as well as the internationalization of the campus with students and faculty from a widespread cultural background helped in my immersion in countries I have worked in, such as Italy, South Africa, UAE and Dubai.

Q: What do you miss most from your days at Deree?
I miss the campus, the athletic facilities, the library as well as networking with my peers in a positive and forward-thinking environment.

Q: What advice would you give a new Deree student?
Have a vision and clear objectives in life and remember that the knowledge you get from Deree will help you to succeed.

Q: Who or what inspires you the most?
People who, no matter what they have accomplished, are humble and simple: Obama, Gandhi, Mandela.

Q: What is your motto in life?
Treat the others the way you want to be treated.

Q: What does your work and/or current projects entail?
Focus, long working hours, stress, collaboration, clear strategy and results as well as satisfaction in the end.

Q: What is the most inspiring aspect of your work?
Managing different cultures and diverse people.

Q: What are your plans for the future?
Empower and inspire today’s youth to take on the world. Offer them as many opportunities to develop themselves and become the leaders of tomorrow.