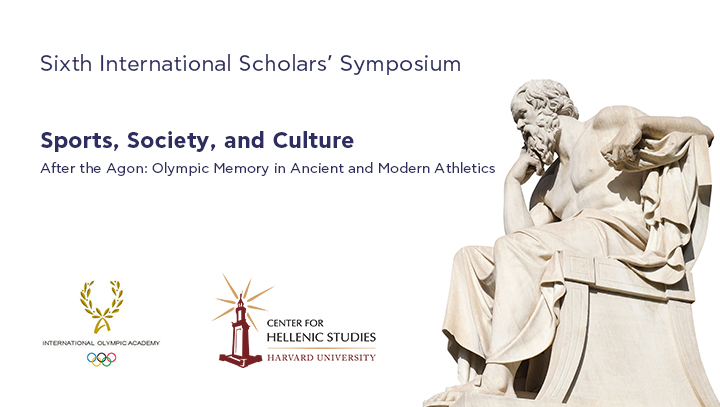 The International Olympic Academy (IOA), in cooperation with Harvard University’s Center for Hellenic Studies (CHS), is organizing the Sixth International Scholars’ Symposium on “Sports, Society and Culture” in Ancient Olympia, on July 9-13, 2017. As in the past years, the Symposium will host scholars from around the world and bring together more than a hundred students and professors from Universities in Greece and abroad.

Building on some of the themes that were developed in the previous years, the specific topic of the 2017 Symposium is “After the Agon: Olympic Memory in Ancient and Modern Athletics.”As part of the international scholarly discourse on sports, society and politics, the 2017 meeting of the IOA/CHS Symposium examines the significance of memory in post-agonistic formations of identity for athletes and their states. By exploring the dynamics of Olympic commemoration, recollection, and emulation, this year’s conference brings to Olympia an academic gathering designed to shed new light on the dialogue between the ancient and modern Olympics.

Rather than placing emphasis on lectures, the Symposium will be based on innovative educational methods such as blended learning and student workshops. Students will have access to a set of core readings and presentation abstracts in advance of the Symposium to better prepare for it. Presentations will be short, and followed by workshops, during which the students will have the opportunity to discuss the readings and reflect on the themes of the presentations in groups.

The Symposium is addressed only to undergraduate students who are in their junior year of studies (3rd year and above), as well as postgraduate students (Masters and PhD students). Priority will be given to first-time participants.

The International Olympic Academy will facilitate, by bus, the transportation of the participants from Athens to Olympia on Saturday, July 9 and from Olympia to Athens on Wednesday, July 13. Accommodation (double room) and meals (Breakfast, Lunch) on the IOA premises will also be offered by the International Olympic Academy. The IOA and the CHS do not cover airfare and other incidental expenses associated with the presence and participation in the symposium, beyond those described above. This is a non-fee based event, and the participants will be given certificates of attendance during the closing ceremony of the Symposium.

The application will open on Wednesday, March 1, 2017. The deadline for all submissions is Sunday, 23rdApril, 2017 Midnight (Eastern European Summer Time). Once you have completed your application, the organizers of the Symposium may contact your referees by Friday, May 5, 2017. The final decision about the participants will be made by May 26. The selected participants will receive acceptance messages via email.