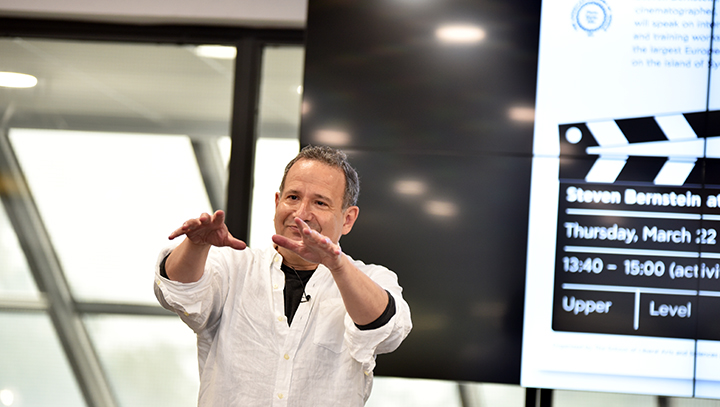 On Thursday, March 22, famous Hollywood director, screenwriter and cinematographer, Steven Bernstein, visited Deree – The American College of Greece for a special information session on the art of filmmaking at the Upper Level of John S. Bailey Library.

Mr. Bernstein gave an inspiring speech about his professional background and mentioned that “The sacred art of film-making is to say to others: you are not alone.”

Steven Bernstein is an American award winning director, screenwriter and cinematographer known for his work in several film productions such as “Monster”, “White Chicks” and “Decoding Annie Parker”.

Mr. Bernstein continued by introducing to the audience his plans for the future with regard to his new Film and TV production company, Somebody Studios, located at the island of Syros, Greece.

Somebody Studios is a state-of-the-art film studio and international film school that aims to expand the Greek film industry and attract worldwide productions to Greece, hoping to make Greece the hub of film production in Europe.

Mr. Bernstein presented to students and faculty the training and workshop opportunities that are currently available at Somebody Studios and are taught by prominent professionals of the international film community. He further highlighted that the training programs are available free of charge to all Greek prospective students while scholarship programs will be offered to selected internationals.

The lecture concluded with an interactive Q and A session where Mr. Bernstein gave answers to the audience about several topics, including ways to overcome writer’s block and how to search for the ideal career opportunities.