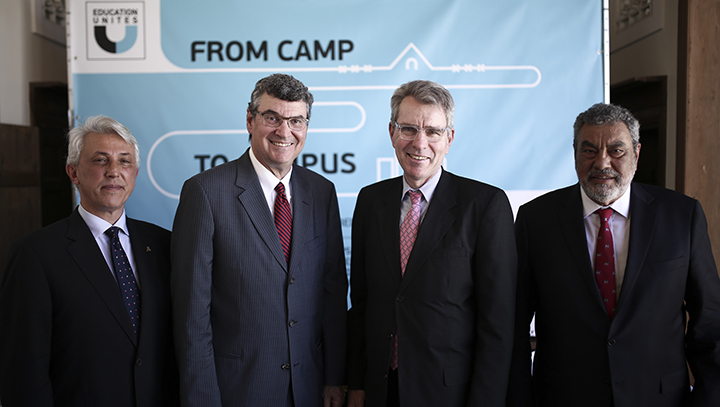 On Thursday, July 6, U.S. Ambassador Geoffrey R. Pyatt, the President of Deree – The American College of Greece, Dr. David G. Horner, the President of Perrotis College at the American Farm School, Dr. Panos Kanellis, and the President of Anatolia College, Dr. Panos Vlachos held a press conference (broadcast live on Facebook) to announce the “Education Unites: From Camp to Campus” program, that will provide higher education scholarships to 100 eligible refugees in Athens, and 100 in Thessaloniki.

The goal of the program is to give opportunities to displaced students to continue their education; provide them with knowledge, skills, and academic credits they can use either in Greece or in any other European country they move to in the future; help them get out of the camps and become integrated in local colleges; and offer young refugees hope for the future.

U.S. Ambassador Pyatt explained that at last year’s Hack the Camp program, a creative marathon aimed at finding solutions to challenges that refugees face in Greece, co-organized by the U.S. Embassy in Athens, a young female refugee spoke passionately of her desire to continue her university education.  She was a student of Economics at a university in Damascus, but she had to abandon her studies as she fled the war. Her plea for a better future through education was the inspiration for the program.

“Unfortunately, that is not an isolated story,” said Ambassador Pyatt, adding that “Hers is typical of the experiences of the tens of thousands of people who have been forced from their homes, and of hundreds of college-aged refugees in camps and shelters throughout Greece who have been forced to put their hopes for education and professional development on hold.”

“I am extremely proud of the legacy that these three schools represent; of American support for Greece and for the people of Greece. These institutions represent excellence in education, they promote an American approach to education abroad, and they have built an enduring partnership between the United States and Greece over many, many years. They are also institutions that have consistently demonstrated their commitment to help Greek and international students receive the highest level of education.”

Dr. David G. Horner, President of The American College of Greece, briefly described the history of ACG, explaining that it was founded in 1875 in Asia Minor, and was forced out of the country in 1922, following the great catastrophe in Smyrna. “We are a refugee institution by heritage,” said Dr. Horner adding, “So, we have a profound connection to the history of refugees and a concern, as a result of that, for the refugees that in 2017 now find themselves displaced and looking for safety, shelter, education, and a future.”

Dr. Panos Vlachos, President of Anatolia College, explained that part of the school’s mission from the very beginning has been “to serve underprivileged people.” With regard to the Education Unites program, Dr. Vlachos said it is a “wonderful opportunity that can make a difference,” adding, “We hope that this program will only be the beginning of a greater effort to try to serve these people.”

“We are a nation familiar with the pain and difficulties immigration causes,” said Dr. Panos Kanellis, President of Perrotis College at the American Farm School. “Many of us have relatives who were refugees only one generation ago, and Greece then also rose to the occasion and showed the world how good citizens embrace those in need.”

“We are delighted to be partnering with the United States government, with the U.S. Embassy, and with our two sister institutions here in Greece, to give a response that hopefully will address some of the very urgent humanitarian needs that we find among the refugee population,” said Dr. Horner. “We are certain that among these refugees are talented young people who will be able to respond to the educational opportunities we can provide for them.”

The “Education Unites: From Camp to Campus” program will offer two courses per student for the next two semesters (Fall 2017-18 and Spring 2017-18) in the three U.S. affiliated colleges in Athens and Thessaloniki. The courses offered will include preparatory English classes, academic classes in diverse fields based on the educational background of participants, as well as vocational training.
At Deree, 100 students will have the opportunity to select from an array of courses, such as:

At the American College of Thessaloniki, 50 refugee students will have the opportunity to take two courses in the fall semester, “Information Literacy” and “English Lab”. At the Perrotis College of the American Farm School in Thessaloniki, 50 students will be able to enroll in courses such as “Marketing,” Research and Presentation Skills,” “Agricultural Economics,” “English Language,” “Introduction to Mathematics,” “Introductory Chemistry,” and “Information Technology.”

The three partner educational institutions will receive and review all applications and will determine together with the applicant the appropriate courses.

For the courses offered by the partner educational institutions, please see: