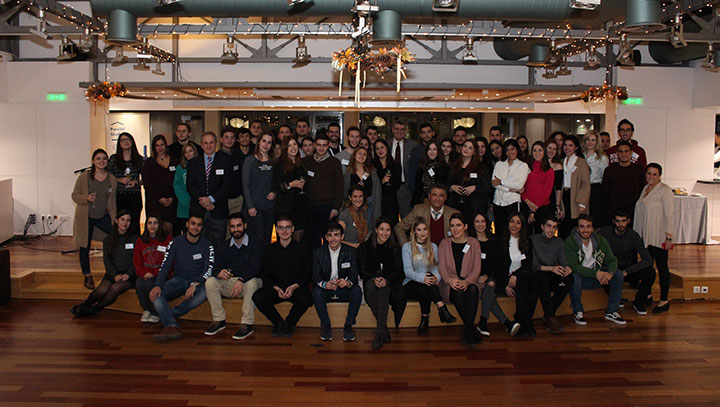 On Thursday December 7, Deree – The American College of Greece held a special event to welcome the Fall Semester 2017 Stavros Niarchos Foundation scholars. In a crowd-filled Student Lounge, Dean of Admissions Lucy Kanatsoulis addressed the opening remarks and introduced the new students to the Vice Presidents of the Departments before giving the floor to the President, Dr. David Horner. Upon welcoming the new scholars, President Horner urged them to make the best of their university years, to learn how to operate in an international environment, to acquire international work and study experience, and to equip themselves for the life challenges that await them.

SNF scholars are high-performing Greek public university students who choose to pursue a parallel degree (minor) at Deree. Commenting on his decision to pursue a minor in International Relations at Deree, Aristeides Aggelopoulos, also a Marketing student at the Athens University of Economics and Business (AUEB), said that it will be a great opportunity to gain as much as he can from his studies in order to start the career of his dreams. A student at the Athens School of Law, Paris Tsoutsis chose to do a minor in Finance at Deree as it will be very important for his future career; he also mentioned that the majority of his fellow students at the Athens School of Law are also Parallel students at Deree.

Currently, 611 students are pursuing a parallel degree at Deree with many of them having received scholarships through the Stavros Niarchos Foundation scholarship program. For the academic year 2017-18 SNF will offer 84 scholarships to support talented Greek university students by covering a significant percentage of their Deree tuition. Through the Parallel Studies Program, students have the opportunity to attend typically 6 US-accredited and EU-validated courses in a specific discipline, while concurrently pursuing their Greek public university degrees. This opportunity allows Parallel students access to the much sought-after international private sector as well as a wide range of academic and career options within Greece.