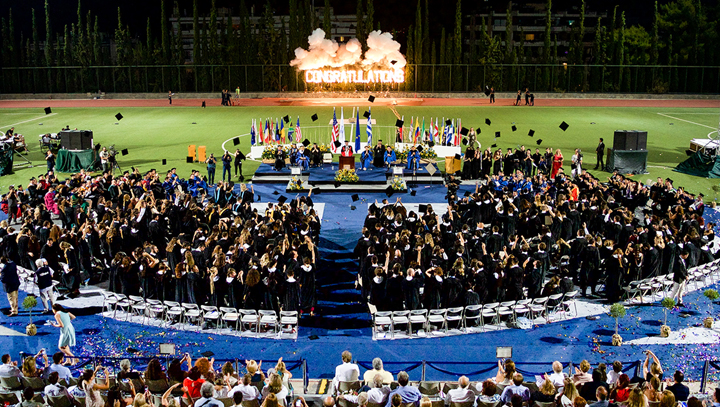 Deree Commencement 2018 is just a few days away! Faculty, staff, students and their family members come together to congratulate all graduates for their accomplishments on the biggest event of the year!

Starting at 20:30 on Saturday, June 30, undergraduate and graduate students will celebrate the completion of their bachelor’s and master’s degrees through an event they will always remember!

This year’s Commencement Address will be delivered by Dr. Dimitri V. Nanopoulos, the 2018 Honorary Degree Recipient.

Dr. Nanopoulos is a distinguished Professor of Physics and holder of the Mitchell/Heep Chair in High Energy Physics at Texas A&M University, head of the Houston Advanced Research Center (HARC) Astroparticle Physics Group, and a fellow and chair of Theoretical Physics at the Academy of Athens in Greece.

The ACG family is proud to welcome 330 graduates to an alumni community of more than 54,000 members!

Dr. Nanopoulos will address the Deree Class of 2018 and will be offered the degree of Doctor of Science, honoris causa, for his contribution to education, research and science.

Dr. Nanopoulos received his BSc in 1971 from the University of Athens and his PhD in 1973 from the University of Sussex, England. He has made several seminal contributions to particle physics and cosmology. He works in unified string theories, fundamentals of quantum theory, astroparticle physics and quantum-inspired models of brain function. Professor Nanopoulos is a fellow of the American Physical Society since 1988 and has also been a Curie Fellow at the Laboratoire de Physique Théorique de l’École Normale Supérieure in Paris (1975-76), Research Fellow at Harvard University (1977-79), CERN staff member (1979-86), Professor of Physics at the University of Wisconsin (1986-88) and joined Texas A&M University in 1989. He has written over 680 original papers, all published in peer-reviewed journals, with high impact factor, including 15 books. He has over 47,950 citations (h_index=106). In 2006 he received the “Onassis International Prize” and in 2009 the “Enrico Fermi” Prize for the relevance of his theoretical results in the study of global and local symmetries in field and string theories and for the discovery of fundamental phenomenological properties of Grand Unification and Superstring Theories.