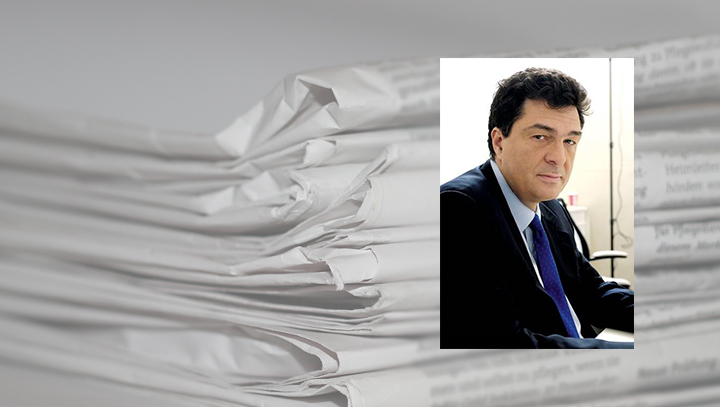 On Wednesday, September 19, Deree students and staff came together at the Upper Level Library to discuss some of today’s most vital issues with Alexis Papahelas, Editor in Chief of Kathimerini, in a conversation themed “Greece: The Day After”. Claudia Carydis, Vice President of Public Affairs, delivered the opening remarks and welcomed on stage Mr. Papahelas and Professor Haris Vlavianos, Director of the Institute of Global Affairs, who moderated the conversation.

The highly influential journalist and author shared his views to a full-house on several current matters, among which freedom of the press; public opinion on media channels; Greek politics; and foreign policy. Commenting on the status quo, Mr. Papahelas supported the involvement of young people in their communities and that the political scene needs new, capable leaders.

“I personally believe that non-profit private universities would really have a healthy impact on our country” stated Mr. Papahelas regarding private institutions of higher education in Greece and expressed his confidence in the younger generations.

The acclaimed journalist revealed the challenges that print media are facing such as the audience’s transition from the analog to the digital world, the economic crisis and the uncertainty that has been created around the integrity of news platforms. Students were given the opportunity to pose questions and to share their views and concerns on the above topics.

The event was organized by the Institute of Global Affairs, Office of Public Affairs, in collaboration with the School of Liberal Arts and Sciences, the History Society, the Communication Society and the International Honors Society.

Network Me Up! Powered by Nestlé