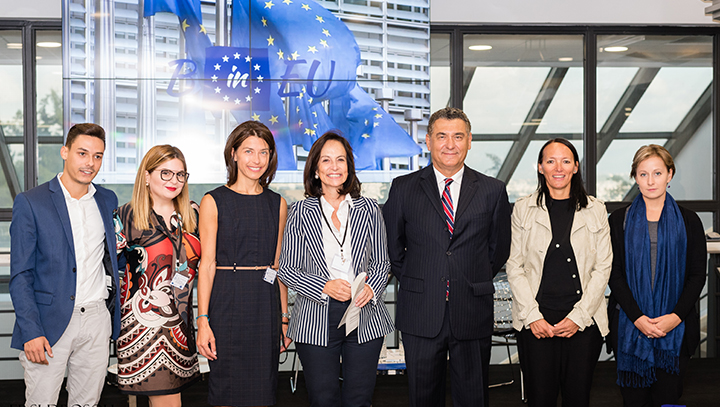 The aim of the B-in-EU project is to promote novel approaches to teaching European integration to business students, equipping them with the special skills and knowledge about the EU, thus turning them into dedicated EU citizens and advocates of European integration.

In her inspirational speech, themed “The imperative for a shared future in an unpredictable world”, Mrs. Diamantopoulou discussed Europe’s main challenges and prospects for the future. Through the centuries, the European continent has been one of blood, wars, among which two World Wars. Now, it is a continent of democracy and peace. Sixty years since its founding Treaty, said Mrs. Diamantopoulou, the European Union can take pride in a unique achievement; that of being the most formidable case of peaceful transnational cooperation in human history. Sadly, the EU is faced with a polycrisis: the Eurozone crisis, Brexit, the refugee and migration crisis, security challenges, and the rise of nationalistic and illiberal forces.

Mrs. Diamantopoulou stressed the need for leaders who will work for Europe and see beyond the national interest, and identified the three global forces that will shape its future in the long run: the rapid demographic change; the dominance of digitization and automation; and the challenges to Europe’s competiveness caused by such emerging economies as China. To survive, Europe will have to invest in innovation and in developing the industries of the future, as well as tackle two major issues, i.e. the government model and the security issue.

On the matter of the Greek crisis, Mrs. Diamantopoulou maintained that Greece, despite its competitive advantages, still needs the EU to stay afloat and that we shouldn’t put our EU participation in doubt.

Speaking of the Erasmus+ program, Mrs. Diamantopoulou described it as the most successful and popular EU project to this day. Designed to combat social inequality and nepotism, and to promote universality, equality for all, and academic excellence, Erasmus+, through its €14.7 billion budget, offers opportunities to over 4 million Europeans to study, train, gain experience, and volunteer abroad.

“Politics is to participate in a movement” concluded Anna Diamantopoulou, speaking of Diktio, the think tank on reform she has established, which is also currently running an Erasmus+, Jean Monnet Program. Diktio is a not-for-profit, think-and act-tank working towards consensus and against polarization. It aims to foster the concept of European citizenship as well as support and strengthen Greece’s European identity.

Congratulations to all B-in-EU Ambassadors, whose commitment, hard work, and team spirit, made the launch of this important event possible!