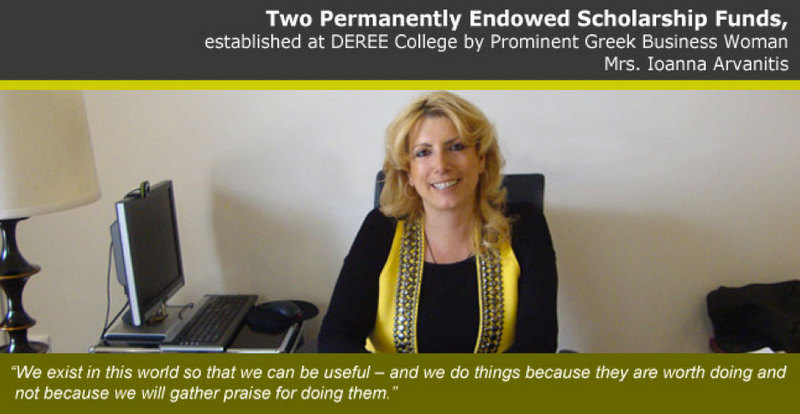 Students from the Northern Peloponnese regions of Aigialeia and Kalavryta are the primary beneficiaries of a new scholarship program at Deree – The American College of Greece that will provide full tuition scholarships for qualified students, financed through a generous gift by prominent Greek business woman Mrs. Ioanna Arvanitis.

Arvanitis’ gift, which established the “Constantinos and Anneta Arvanitis Scholarships”, is one of the most significant in the recent history of The American College of Greece, a non-profit educational institution. According to President David G. Horner “these scholarships will greatly improve our ability to attract and educate talented students with limited means from these regions and we are deeply grateful to Mrs. Arvanitis for this very generous gift.”

The gift comes at a time of great distress in Greek society, when more and more students require financial aid in order to acquire a quality education. Vice President of Development George Triantaris applauds Mrs. Arvanitis’ foresight in making this gift, “since the College’s founding in 1875 alumni and friends from Greece and abroad have provided essential support that enabled countless students to achieve an education that would not otherwise have been possible. This gift furthers a tradition that we need to expand.”

In an interview, Mrs. Arvanitis made it clear that her gift – named in honor of her parents Constantinos and Anneta – was born of her conviction that “we exist in this world so that we can be useful – and we do things because they are worth doing and not because we will gather praise for doing them.”

Of course, noble causes abound, especially at a time of crisis, but Mrs. Arvanitis said that she chose to help educate young people because she shares her late father’s conviction that education is the only means to elevate people.

Mrs. Arvanitis came to know DEREE better when her son, George Karaouzas – Arvanitis, enrolled at the College. He graduated in 2010 with a B.Sc. in management and continued on with his studies at Parsons, The New School for Design in New York City. His proud mother declares herself a believer in the American model of higher education followed by DEREE: “I truly believe that the American system fits best with the Greek temperament” she says. By sending her son to DEREE, she wanted him to “do what he really wanted and what suited him best, in an environment that would not disappoint him or make him feel that the only thing that will make him happy would be a diploma rather than the knowledge and the experience that go with it.”

As Greece continues to be shaken by an economic crisis unprecedented in its modern history, education may be the best long-term solution to the country’s ills. Let’s face it, Mrs. Arvanitis said, “Greece is a country where seriousness of purpose and prudence did not have pride of place; we must get serious and we must teach our kids to become thinking citizens. This we will achieve only through better education.”

In order to qualify for one of the Arvanitis scholarships, candidates from the regions of Aigialeia and Kalavryta must meet criteria that indicate financial need and the ability to be successful DEREE students.