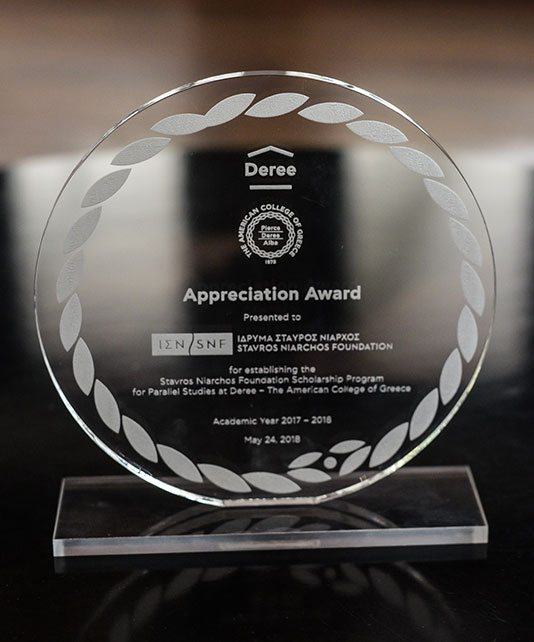 In August of 2018, the Stavros Niarchos Foundation (SNF) transitioned its generous SNF Scholars Program grant from an expendable gift, into a $1.8M endowment to The American College of Greece in perpetuity. This program in past years afforded Greek public university students US accredited and EU-validated programs in pursuit of a minor to complement their studies at the Greek University. At present, this has been accomplished by some 300+ SNF Scholars through the opportunity of parallel studies on the Deree campus. Research has affirmed through tracking recipients of this program that the initial grant had become a valuable asset, both to the scholars and Greece’s economic potentials, while concurrently bridging public/private partnerships to new and available job market opportunities.

“Being an SNF Scholar played a major role in broadening my perspective; expanding my network; turning me into a citizen of the world; helping me develop valuable soft skills; and thinking out of the box. The most important element of the SNF Scholarship experience is constant exposure to opportunity.”—Alexia Oikonomakou, SNF Scholar; School of Mechanical Engineering, National Technical University of Athens; Minor in Finance, Deree – The American College of Greece

Feeling the effects of the global financial crises for a full decade, many Greek public university students reflect the talent and abilities to excel in ACG’s undergraduate programs, but due to their socio-economic circumstances, have found that dream financially challenging. The Stavros Niarchos Foundation, as part of its earlier “Recharging the Youth Initiative,” has committed to its overarching goal to raise and enhance the economic conditions in Greece. The SNF Parallel Studies Program, in tandem with a series of activities including Mentoring and Internship initiatives, aim to tackle the challenging unemployment rates facing the Greek youth of today. As of this year, this generous endowment will energize the goals and dreams of even more selected Greek scholars in perpetuity.

“The SNF Program at DEREE moves its participants out of their comfort zone, it unsettles them, it alarms them. It acts as a constant reminder that perfection is quite not good enough and we have only managed to scratch the surface of it, that the sky is the limit but getting there in the first place is the tricky part.”—George Taliakis, SNF Scholar School of Architecture, National Technical University of Athens; Minor in Environmental Sciences, DEREE – The American College of Greece

What for five years has been a substantial and exclusive donation by the Stavros Niarchos Foundation – greatly appreciated by The American College of Greece for helping to spread its reputation of excellence and goodwill, will now be a part of its legacy.