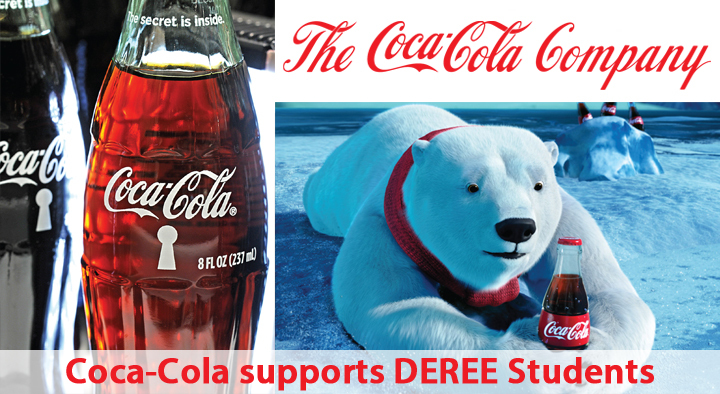 The American College of Greece wishes to acknowledge the invaluable contribution of The Coca-Cola Company to the development and encouragement of DEREE-ACG students.

The Coca-Cola Company is one of ACG’s stellar partners in its International Internship & Study Abroad Program (IISAP), and offers qualifying DEREE students an internship at one of its myriad offices worldwide, followed by or preceded by a semester to study abroad at any ACG partner institution, which The Coca-Cola Company covers for the student.

In 2014, 10 students worked as interns for Coca-Cola in: Milan, Italy (four), one in Slovenia, one student went to Bucharest, Romania, two went to Vienna, Austria, and two to Warsaw, Poland.

Ten more students will leave in January 2015 to work as interns in the following positions:

Interviews are taking place in November to determine which students will fill the above positions for a period of five months.

“The students are very excited about the prospect of interning with The Coca-Cola Company worldwide, and the American College of Greece is deeply grateful for the Company’s commitment and service to our students,” says Mary-Irene Triantafillou, ACG’s Executive Director of Development.

“Through this program we have the opportunity to meet passionate and committed students, who live their internship experience very seriously, contributing to the teams they work with. Our management was so pleased with the quality of the students that they encouraged us to participate again in 2015.” Craig Harwood, CSE Human Resources Director

Showing the program’s success, The Coca-Cola Company extended the 2014 internships upon the students’ return with three of the students now working at the Athens office temporarily. Congratulations to Andriy Pidopryhora, Evangelia Theodoraki, and Ifigeneia Chatzantoni!

DEREE students are eligible to participate in the innovative international program that enables highly qualified young men and women to spend a semester abroad in the US or UK studying at a partner institution followed (or proceeded) by a five-month internship at an international company.

Twenty-six students participated in IISAP in its first two years (‘12-‘13) with the LIBRA GROUP, travelling to eight cities in five countries on three continents. Their projects focused on a variety of fields including communications, information technology, real-estate management, renewable energy, finance, financial research, and hospitality, among others. Since then, an additional 30 DEREE students have also interned – 16 with the LIBRA Group, ten with Coca-Cola, two with S&B and two with DIAGEO in their offices worldwide.