customize
Home » Why Give » Gifts of Note » ACG Proud of its Participation in a Refugee Scholarship Program funded by the U.S. Government and the U.S. Embassy in Athens. 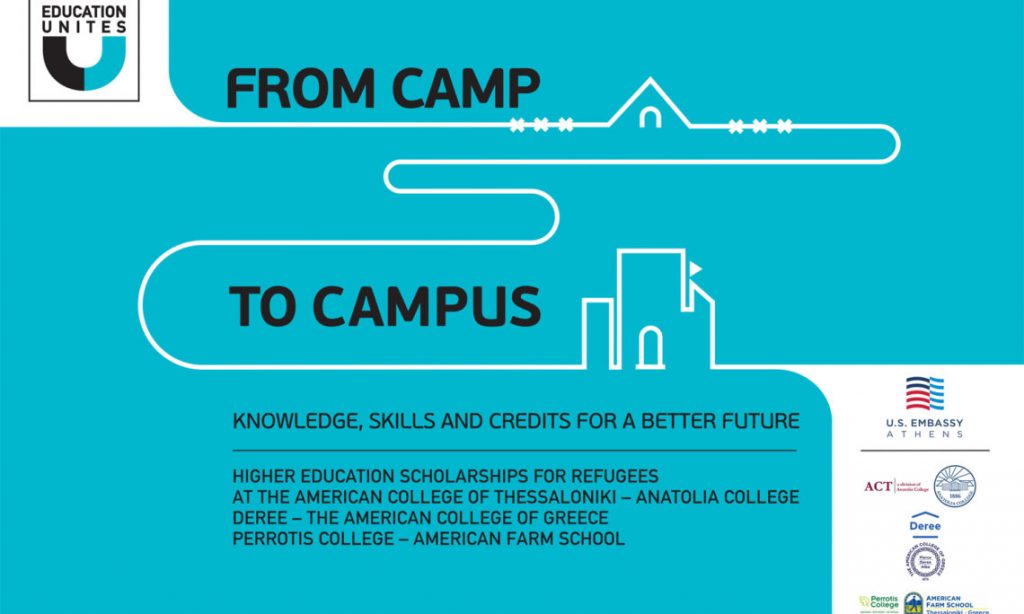 Partnering with the U.S. Embassy in Athens, The American College of Greece, together with Perrotis College at the American Farm School and Anatolia College of Thessaloniki, the “Education Unites: From Camp to Campus” program was created and executed for two semesters beginning in the fall of 2017 through August of 2018. This educational program was initially designated and funded through the efforts of the U.S. Government and the U.S. Embassy in Athens to provide a two-semester academic program for some 200 refugees and asylum seekers in Greece. The targeted pool of recipients were highly motivated and talented former students currently being hosted in Greek refugee facilities. Wishing to continue their tertiary studies while awaiting their final asylum status was the major criterion.

The program was in operation in both Athens and Thessaloniki for one academic year, and U.S. Government funding for the initiative concluded in August of 2018. ACG served the academic needs of 87 students during that period, with 18 currently able to continue with the program, thanks to the efforts and internal funding from The American College of Greece. It should also be mentioned that there are three students in the program currently enrolled at the Alba Graduate Business School, The American College of Greece, pursuing a Master’s degree. All of these displaced young people are continuing to gain the knowledge, skills and academic credits they will use to better their lives in a future home country.

Exemplary of students the program is assisting is the story of Farahnaz Faiz, from Afghanistan, where she had previously spent two months in prison in Turkey with her family. She had studied economics for six semesters at a university in Afghanistan and obtained an “Admiration Award” for achieving the highest grades during her last year. She was teaching science and IT at a high school in Afghanistan prior to leaving her war-torn country.

“Regardless of what opportunities this scholarship might bring, the most important thing is that it allows me to continue my life with purpose, agency, and passion. Education is everything to me. School has always been an inseparable part of my life. A big dream of mine has always been to see my name with the title of professor. I know I can do it if I get the opportunities.”

Another standout of the program is Fridoon Joinda, also from Afghanistan. This young man was active with the refugee services in Lesvos, acting as interpreter and teaching English there. He helped to train volunteers and aided in the orientation of new refugees. He is a venerate filmmaker, and had been making documentaries and short films with no budget.

“This program has been very important for me, for my future. It is my everything now – I was away from my education for 3 years and once I got to Greece it was not easy to continue my studies. This has been a great opportunity and has made me more hopeful for my life and my future as a filmmaker.”

ACG is proud of its involvement with this program, helping the above students, and others with equally impressive stories. Through the efforts of the College these young scholars will be able to continue on a path to improve their lives.