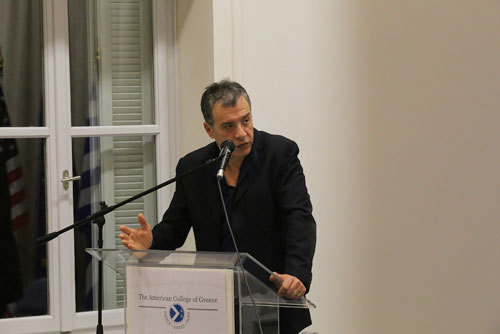 Stavros Theodorakis, the head of the political party To Potami, gave a lecture at the American College of Greece’s Institute of Diplomacy and Global Affairs on his party’s positions on foreign policy – but also expanded on other matters of interest in view of the political climate and upcoming presidential elections in Greece.

Mr Theodorakis, a former journalist, outlined his views on what is happening in Greece’s wider neighborhood in the lecture entitled "The Terror of the West for the Christian Sergeant who joined the Zihadists," and said that the televised beheadings by the Islamic State have two important elements: They show the need for action to defend the weak, which he said was an obligation of the West’s, and they also cause insecurity in western societies – which leads to a number of phenomena, including fear of immigrants and the rise of right-wing parties which bank on that fear.

In his lecture on December 11 to a packed hall at the Institute’s premises in Plaka, Mr Theodorakis expanded on his party’s views on illegal immigration, the Greek economy, the Syrian refugee crisis, Greek-Turkish relations, FYROM and the Cyprus issue, among other topics.

The head of the To Potami party concluded by saying that his party is very Europe-oriented and reformist. Andreas Andrianopoulos the head of the Institute of Diplomacy and Global Affairs, thanked Stavros Theodorakis for an engaging lecture