Six international students at DEREE – The American College of Greece, all from the United States, reaped an unexpected gift from their stay in Greece by participating in this year’s 31st Athens Classic Marathon, the annual 42-kilometer (26.5-mile) race that traces the original route from the town of Marathon to the center of Athens. 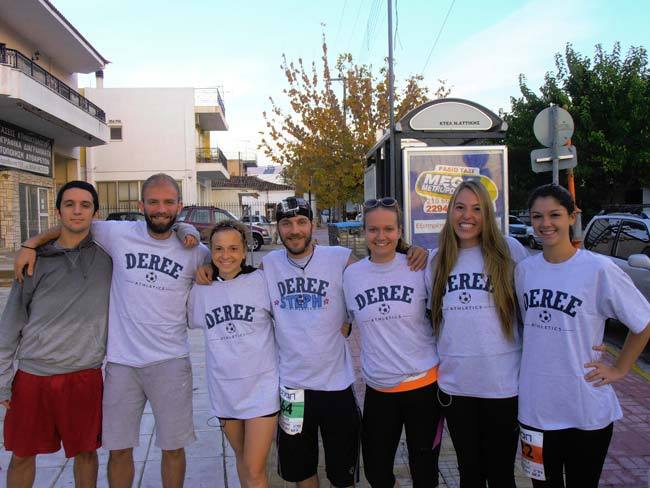 They all made it to the finish and dedicated their run to a classmate, Stephanie Nedzweckas a fellow study-abroad student from Endicott College, who was not able to compete because of an injury during training.

The sixth, Gwen Hobson, is pursuing her undergraduate degree at DEREE. Hobson, who had just turned 18, was the youngest female among the more than 11,000 runners who participated in the race.

Ilias Papaj, a DEREE student and residence assistant run with the six Americans.

Only Merwine, a former US Marine aged 27, had prior experience running a marathon race. Sacrificing a shot at a decent finishing time, he stayed behind to help two of his fellow DEREE runners make it past the finish line.

None of the students knew each other before meeting at the DEREE dorms but they trained together for 40 days to get into shape. Now they are planning to run together again next March, in the Rome Marathon.