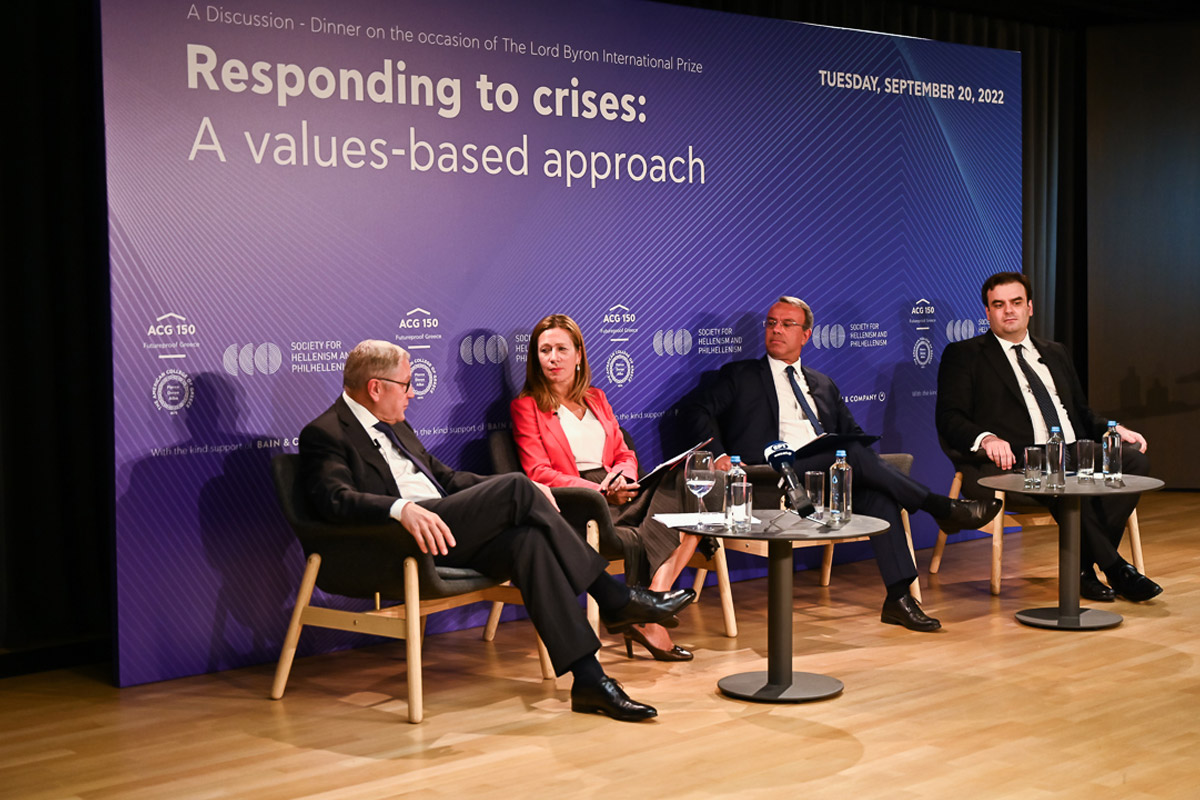 On September 20, 2022, distinguished guests from the academic, political and business communities participated in a discussion-dinner at the ACG Events Hall on the occasion of the second Lord Byron International Philhellenism Prize. The discussion, entitled “Responding to crises: A values-based approach,” highlighted the importance and necessity of defending universal values in dealing with the multiple crises that the planet is facing today.

Klaus P. Regling, CEO of the European Financial Stability Facility and Managing Director of the European Stability Mechanism, and Jack Lew, former US Secretary of the Treasury, participated in the event and were recipients of the 2022 International Philhellenism Lord Byron Prize. Christos Staikouras, Minister of Finance of Greece and Kyriakos Pierrakakis, Minister of State and Digital Governance of Greece, took part in the discussion. The Society for Hellenism and Philhellenism (SHP) and ACG Institute for Hellenic Growth & Prosperity (IHGP) co-organized the event in continuation of the award ceremony held earlier in the day at the Academy of Athens.

Dr. David Horner, President of The American College of Greece, opened the event by stating that for 47 years in Smryna and 100 years in Greece, the College has been introducing best practices of American education to Greek society. Despite the Greek economic crisis, ACG further expanded its contribution economically, culturally and socially by investing in the following new initiatives: Institute of Public Health, Institute for Hellenic Culture and the Liberal Arts, and Institute for Hellenic Growth and Prosperity.

It is up to each generation to renew its commitment to enduring ideals such as goodness, aesthetics, and justice, to learn from successes and failures of the past, and to strive to chart a better path toward the future. 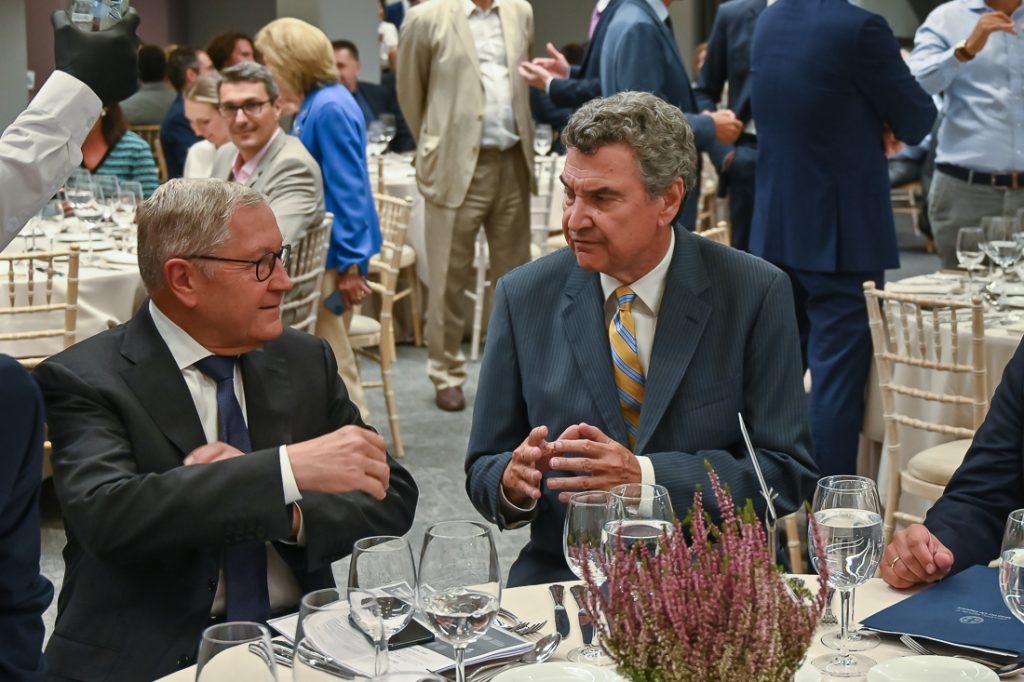 In his welcoming remarks, Dr. Michalis Psalidopoulos, Chief Consultant and Chair of the Advisory Board at IHGP said: “Crises are an integral part of economic life, which we must study to yield conclusions. The Eurozone and Greece successfully dealt with the financial crisis of 2008, but now the pandemic, war in Ukraine and energy crisis pose new challenges. In order to plan for a better future, we need to review past crises and reflect on what happened and how it helped us shape a better present.”

During the discussion, Klaus Regling stated, “Greece experienced a large-scale economic crisis in the past decade, which made it imperative to strengthen the country from its allies abroad. The European Union and IMF contributed significantly to the effort to deal with the debt crisis that was plaguing the economy. The cooperation of different organizations and the solidarity of EU member states enabled Greece to get back on its feet. In just a few years, Greece managed not only to avoid the risk of Grexit but also to record post-pandemic one of the best economic performances among the member countries of the Eurozone.”

Jack Lew referred to the challenging course of Greece’s fiscal adjustment: “Eight decades after World War II, Europe remains united and prosperous, with Greece being an integral member and actively contributing to maintaining its stability. Through its institutional organizations, Europe has managed to face a series of challenges together, such as the Greek debt crisis and the pandemic, forming a rich legacy to deal with challenges that may appear in the future.” 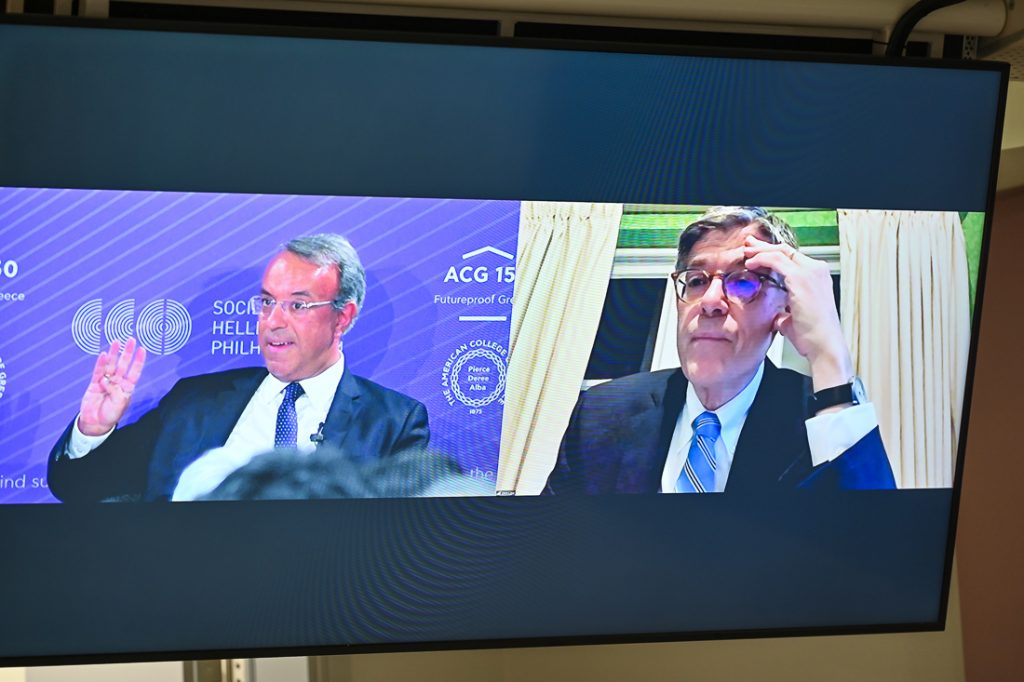 Christos Staikouras, speaking about the path of the Greek economic recovery, said: “The government is deeply committed to the implementation of structural reforms with the aim of strengthening the resilience and competitiveness of the Greek economy, achieving high and sustainable growth and adapting to the new demands posed by the ecosystem. For 2022, we expect growth rates close to 5.3%, and, as in the previous year, exports and investments to further increase compared to the rest of EU countries. Therefore, despite the serious challenges at the international and European levels, the Greek economy is undoubtedly moving in the right direction. By implementing investments, reforms and the utilization of new technologies, we can lead our economy to high and sustainable growth rates.”

In turn, Kyriakos Pierrakakis, referred to the Greek government’s initiative to take advantage of the crisis caused by the coronavirus pandemic, fundamentally changing how citizens interact with the State. More specifically, he stated, “our policy reflects our values – and we believe that digital tools are tools that improve everyone’s daily life and simultaneously upgrade the administration’s capabilities. Realizing the vision of Greek Prime Minister Kyriakos Mitsotakis, we designed the Ministry of Digital Governance wherein we apply a digital policy functioning as a horizontal social policy.”

Konstantinos Velentzas, President and founder of the SHP, creator of the Lord Byron Prize and co-organizer of the event, was a presenter. The debate moderator was journalist Katerina Sokou, correspondent and Foreign Affairs Analyst in Washington, United States, and member of the SHP Advisory Committee. The event was held with the generous support of Brain & Company. 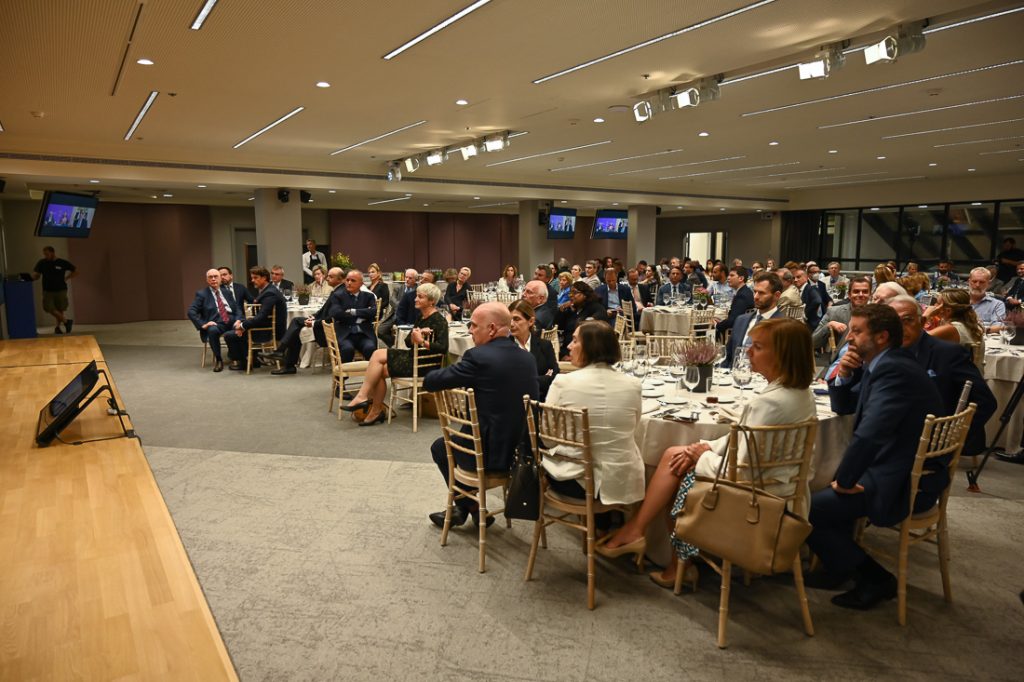 The SHP founded and awards annually the International Lord Byron Award to three distinguished personalities from the international political, cultural, academic or entrepreneurial world, with a seminal social contribution through their careers and actions, based on and inspired by the classical values of Hellenism.

Each laureate of the annual Lord Byron Prize is awarded a silver medal and a diploma. Moreover, SHP donates a $10,000 grant in their name to an institution of their choice, which is active in areas that serve and promote the values of Hellenism and Philhellenism.

The Prize, placed under the auspices of the Ministry of Foreign Affairs of Greece, is awarded in the name of Lord Byron, the great poet and Philhellene who died in Missolonghi (April 19, 1824) during the Greek War of Independence. The Lord Byron Prize has been designed to promote the values ​​of Greek civilization and philhellenism internationally as a virtue with a beneficial effect on the societies of the entire civilized world.