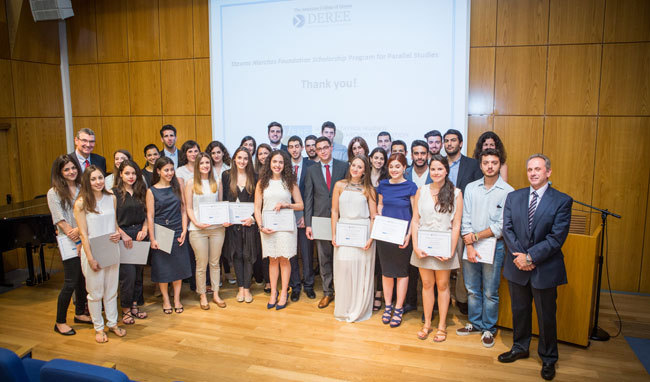 Over thirty scholars participating in the Scholarship Program for Parallel Studies at DEREE-The American College of Greece (ACG), along with their parents, faculty, and administrators from ACG gathered at the college’s campus in Ag. Paraskevi on May 22 to pay tribute to the Stavros Niarchos Foundation (SNF), donor of the program. SNF supports high-achieving students who pursue parallel studies at DEREE and Greece’s public universities.

“I’d like to congratulate the scholars, as well as their parents and say ‘Thank You’ to the Stavros Niarchos Foundation; it doesn’t get better than this,“ said ACG President David G. Horner, welcoming the audience to the celebratory event, where the 35 SNF scholars received certificates of scholarship, cheered on by their parents, friends and professors.

“We are thrilled with the quality of their work, their ease of social interaction, and their academic prowess,” noted Dr. Horner of the scholars during the ceremony at DEREE’s 7th Level Auditorium, adding “they are very fine students, and the program enhances their personal lives and careers going forward.  As an educator, I am thrilled and very happy to recognize these accomplishments and say ‘Thank You’ to the Stavros Niarchos Foundation for this outstanding Scholarship Program for Parallel Studies at The American College of Greece.”

Launched in 2014, the program allows high-achieving students from Greek public universities who want to combine fields of study and enhance their academic skills to study in parallel at DEREE, through merit-based scholarships from the SNF, augmented by ACG merit- and need-based scholarships.

In her opening remarks, Mary-Irene Triantafillou (DEREE ’89), executive director of Development at ACG, welcomed Eleni Agouridi, an SNF program officer, who played a key role in developing this program, as well as Manos Vazaios, SNF’s chief IT officer.

Ms. Agouridi accepted a certificate of appreciation on behalf of the Stavros Niarchos Foundation from President Horner.

“On behalf of our Board of Directors, I would like to thank you for this ceremony in honor of the scholars of the Parallel Studies Program,” said Ms. Agouridi. She explained that the gift that created the SNF Scholarship Program at DEREE falls under the greater initiative called Recharging the Youth, which aims at creating opportunities for the younger generations and tackling the alarmingly high rate of youth unemployment in Greece.

“When it comes to education, we, at the Foundation, are focusing on, among other things, initiatives that support academic excellence. [We do so] on the one hand by supporting high-caliber students who want to continue their studies abroad through cooperative programs with international universities, as well as with institutions like the Fulbright Foundation, and on the other through the creation of the Center for Talented Youth in cooperation with Johns Hopkins University and Anatolia College,” she said.

“We are proud to be able to support students who excel in Greek public universities so that they can pursue parallel studies at DEREE. We wish all students success in their studies and later in their careers.”

Dr. Dimitrios Andreou, ACG’s vice president for Enrollment and Administration, noted the program’s successful beginning and the scores of high-caliber students that applied to join. He explained that Scholars are given access to the whole array of opportunities enjoyed by degree-seeking undergraduates at DEREE, including internship and study abroad opportunities.

Speaking on behalf of their fellow scholars, students Theodora Kountentaki and Dimitris Stamatis expressed gratitude to the SNF for the opportunity to study in such a value-adding program, especially in a difficult period for Greece and Greek families.

For more on the Stavros Niarchos Foundation Scholarship Program for Parallel Studies at DEREE-The American College of Greece, click here