On December 6, 2022, distinguished academics gathered at the ACG Events Hall for a compelling panel discussion on the occasion of the publication of Diaspora engagement in times of severe economic crisis: Greece and beyond. The book’s co-authors, Dr. Othon Anastasakis, Director of European Studies Centre & SEESOX Principal Investigator of the Greek Diaspora Project at the University of Oxford, and Dr. Manolis Pratsinakis, Assistant Professor in Social Geography, Harokopio University and Research Affiliate, COMPAS, University of Oxford, presented their University of Oxford Greek Diaspora Project’s case studies on how crises and global uncertainties affect contemporary Greek diaspora-homeland relations. Dr. Panos Vlachopoulos, Executive Dean at Deree – The American College of Greece, and Katerina Sokou, Theodore Couloumbis Research Fellow on “Greek-American Relations” at ELIAMEP, rounded off the panelists. Dr. David G. Horner, President of The American College of Greece, gave the opening remarks. Dr. Lamprini Rori, Assistant Professor in Political Analysis at the National and Kapodistrian University of Athens, was scheduled to participate in the discussion but was absent due to illness. The event was co-organized by the ACG Institute for Hellenic Culture and the Liberal Arts (IHCLA) and ACG Institute of Global Affairs (IGA).

The panelists addressed the state of Greece’s relations with its diaspora as these have evolved during the recent years of consecutive crises and uncertainty. They discussed the role and significance of Hellenism abroad by touching upon the following issues: the significance of diasporic institutions, crises-driven migration and diasporic mobility, diasporic solidarity with the motherland, the role of diasporic networks and associations in the era of technological communication.

Dr. Othon Anastasakis took over the role of moderator from Dr. Eirini Karamouzi, IHCLA Fellow and event organizer, who could not attend the event due to illness. Dr. Anastasakis presented how the crisis affected diasporic engagement with the homeland, as well as diasporic identities, attitudes and transnational mobilization. Some critical findings proved disappointment by the diaspora with homeland reality and a lack of trust in the system. Yet is there a post-crisis new mode of engagement and spaces of interaction? The findings show that social media can be a vital tool to empower and engage younger dynamic generations with the homeland.

Dr. Manolis Pratsinakis took the floor to present the research methodology utilized in the book to answer the following question: What was Greece’s emigration outflow during the economic crisis? Dr. Pratsinakis observed that the economic crisis was crucial in reshaping broader socioeconomic dynamics that allowed or triggered Greek emigrants’ decision to leave the homeland. Most emigrants were transnationals and ‘Eurostars’ getting ahead in life, older career-oriented professionals and necessity-driven migrants. He stated: “By altering everyday discourse on emigration and loosening up social constraints towards long-distance mobility, the crisis made emigration an option to be widely considered. At the same time, the presence of new migrants abroad induced and facilitated further migration through the working of transnational networks in a self-feeding process.”

Katerina Sokou pointed out that the Greek diaspora in the United States is a resource for Greece since it has been historically united in its support of the homeland. She mentioned that it is more diverse compared to other diaspora communities worldwide. Yet the US diaspora was challenged on how to respond during the Greek economic crisis. Philanthropic organizations and nonprofit institutions, such as the Hellenic Initiative, stepped up to the challenge and provided entrepreneurship support to drive investments in Greece.

Dr. Panos Vlachopoulos described the findings of his three-year research project (2020-2023), funded by the Hellenic Foundation for Research & Innovation (H.F.R.I.), which focused on the youth of new Greek migrant families in Australia who emigrated during the financial crisis. The purpose of this study was to make concrete teaching proposals concerning Greek language education abroad based on ethnographic research findings. The findings show that Greek is mainly present in the domain of family and school lessons and that traditional enablers such as family and schools still play a determining role in relation to the cultivation and development of practices that relate to the Greek language. Although English holds a dominating position, some children make conscious efforts to engage themselves for their own personal purposes in Greek.

The event closed with a lively discussion regarding the facilitation of diasporic vote and transnational diaspora identities. The book’s co-authors concluded that they have opened new spaces for work and are looking forward to broadening their research to focus on the US diaspora and younger generation, as well as Germany, which had the largest influx of Greek emigrants during the economic crisis. 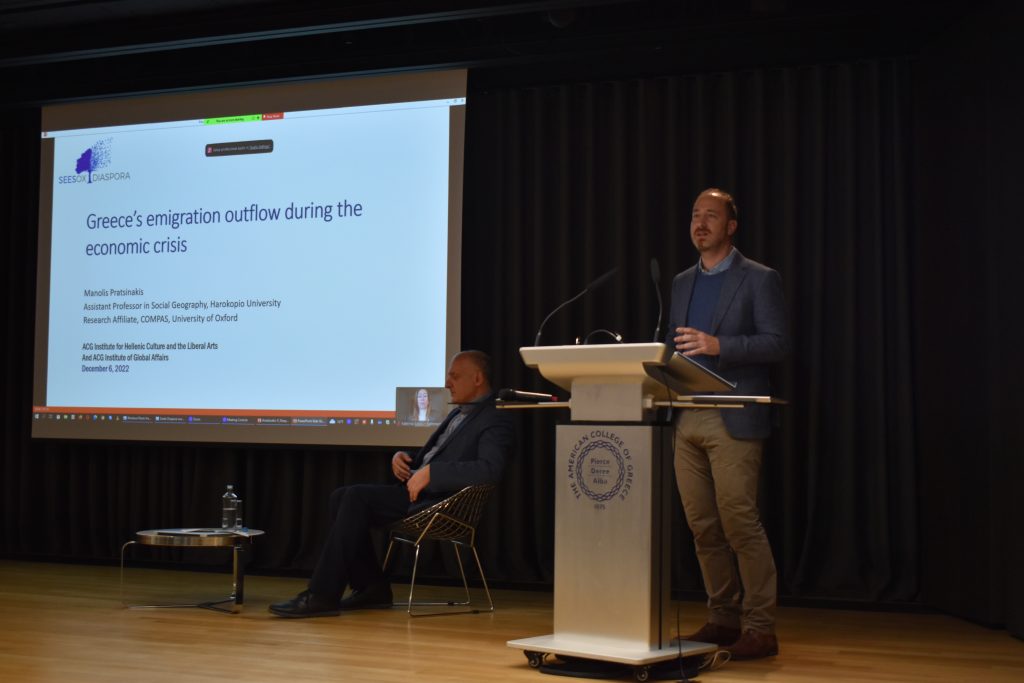 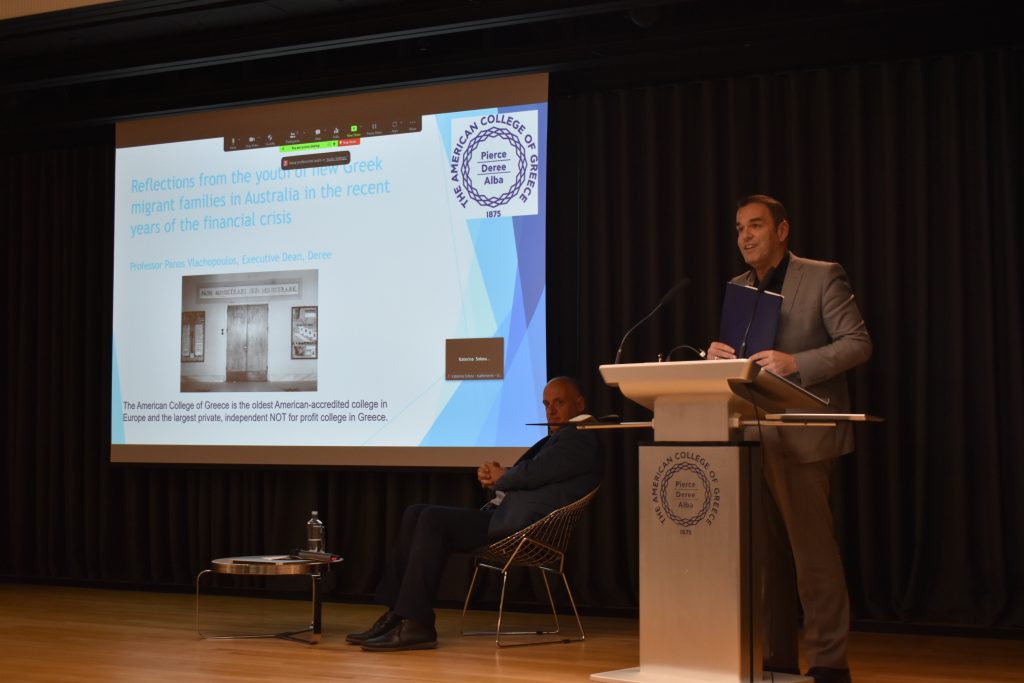 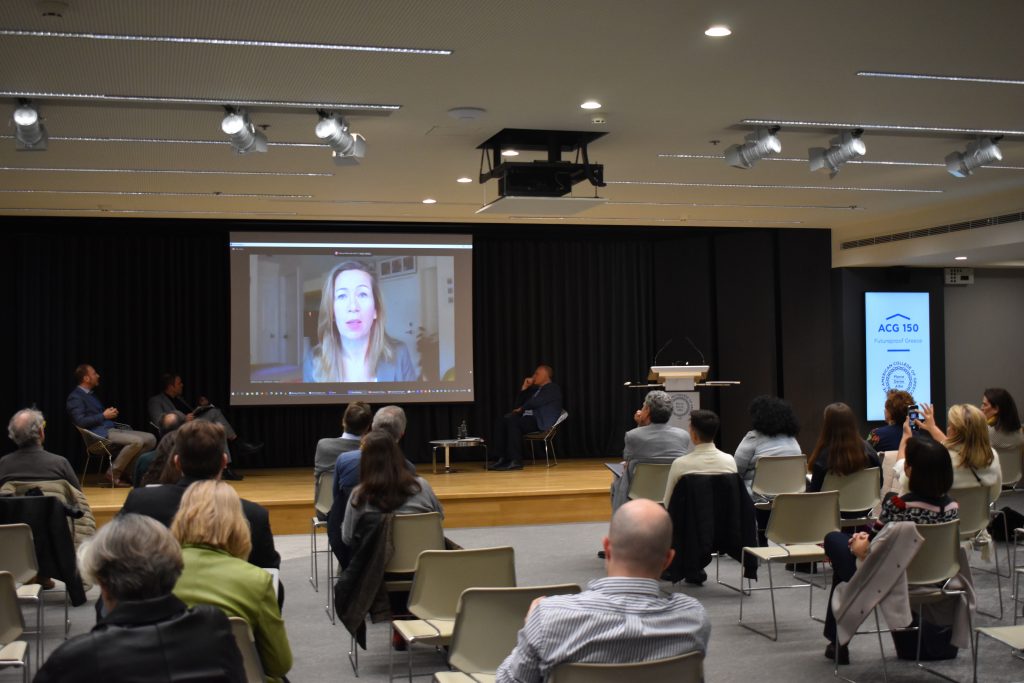