On November 5, DEREE–The American College of Greece hosted the Entrepreneurship Conference “Turning a Sea of Opportunities into Opportunities You See”, featuring a string of distinguished businessmen – including COCO-MAT Founder and CEO Paul Efmorfidis and Apostolos Apostolakis, the co-founder of e-shop.gr and advisor to Taxibeat – who shared their business expertise with ACG students, faculty and other guests

The conference hosted at the Ag. Paraskevi campus kicked off with a speech by Dr. Annie Triantafillou, Dean ad interim of the DEREE School of Business, who described DEREE’s BSc (Honors) in Business Administration (Entrepreneurship Management), which “aims at developing the culture of entrepreneurs…” and noted that "2014 marks the 40th anniversary of the first Bachelor of Science in Business Administration degrees issued by DEREE."

Introducing the distinguished panel of entrepreneurs, Dr. Katerina Voutsina, professor of management at DEREE’s School of Business, spoke of the “great honor and pleasure of having such distinguished people from the business world speak to the students, sharing their views.”

Speaking to a packed conference room at the John S. Bailey Library, COCO-MAT’s Founder Paul Efmorfidis toured the hall on his unique bike, made of oak, the latest product from his eco-friendly company COCO-MAT, recounting the ways he plans to market the bike and the role passion and business partners play in a successful company, among other numerous insights. 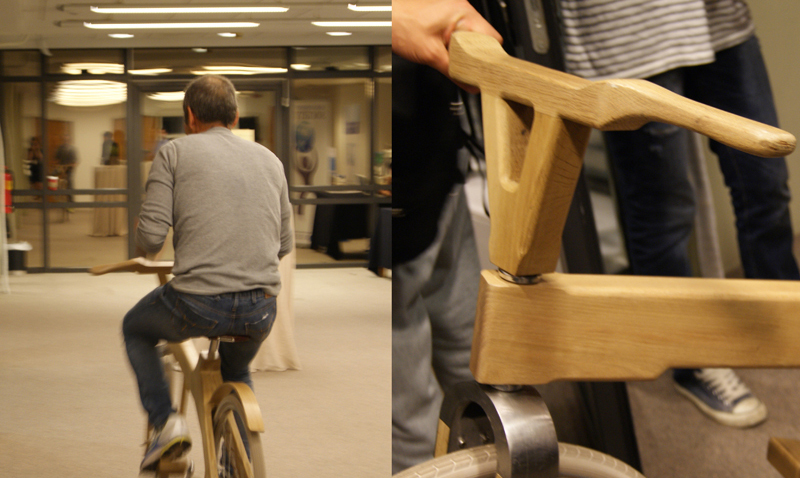 “If you don’t love the person next to you, the company doesn’t work,” Efmorfidis told a rapt audience, adding, “In the end, everything is simple. Even this bike is simple…” but warned that “there are only walls there when you start a business…. When you startup, everyone is against you. You have to find a loophole to touch their hearts,” and recounted his numerous, innovative strategies at reaching his customers.

Up next, e-shop’s Apostolos Apostolakis, spoke of the passion, costs and time involved in a startup – using his myriad breakthrough startups as examples – e.g. doctoranytime.gr, e-table, and nannuka.gr – and advised students to seek funding “at the latest possible stage, once all the homework has been done.”

On his part, TrueGreece’s Founder and CEO Christos Stergiou traced the steps from an idea to a company, including a huge investment in research – advising students to seek advice and know-how, to “listen to your heart, go talk to people and listen to your mind as well,” while ignoring the naysayers. He prodded the audience to never lose sight of the big picture, and to “defy the Greek borders.”

George Vytogiannis, on his part, said that opportunities always exist but “not everybody can see them,” outlining how he steered his third-generation family business -Vytogiannis Group of Companies – towards exports of Greek products, and underlined how credibility and values were what made the difference in his company weathering the economic storm. He urged students “When writing the story of your life, don’t let anyone else hold the pen.”

NAK owner Ayis Georgoudas spoke of his company’s breakthrough moment – getting Bally shoes on board – before becoming a brand, outlined the company’s later growth through the crisis, and explained how NAK seized the “great opportunity to restructure and assume a new position in the market.”

Taking the podium, John Nikolaidis of JusteXpand spoke of his four undergraduate years at DEREE as the “best four years of my life,” and also shared insights from his career, which began at the helm of the family business – not always the best thing if you’re inexperienced, he said. He encouraged students to look at the world as their market, to seek advice from the right people, and advised them “hard work trumps talent.”

Organized by DEREE’s Department of Management and the Management Society, the Entrepreneurship Conference connected students with entrepreneurs who have turned their innovative ideas into products and services that have impacted the market and society, and with those who have taken the helm of their family businesses and steered them in new, exciting directions.