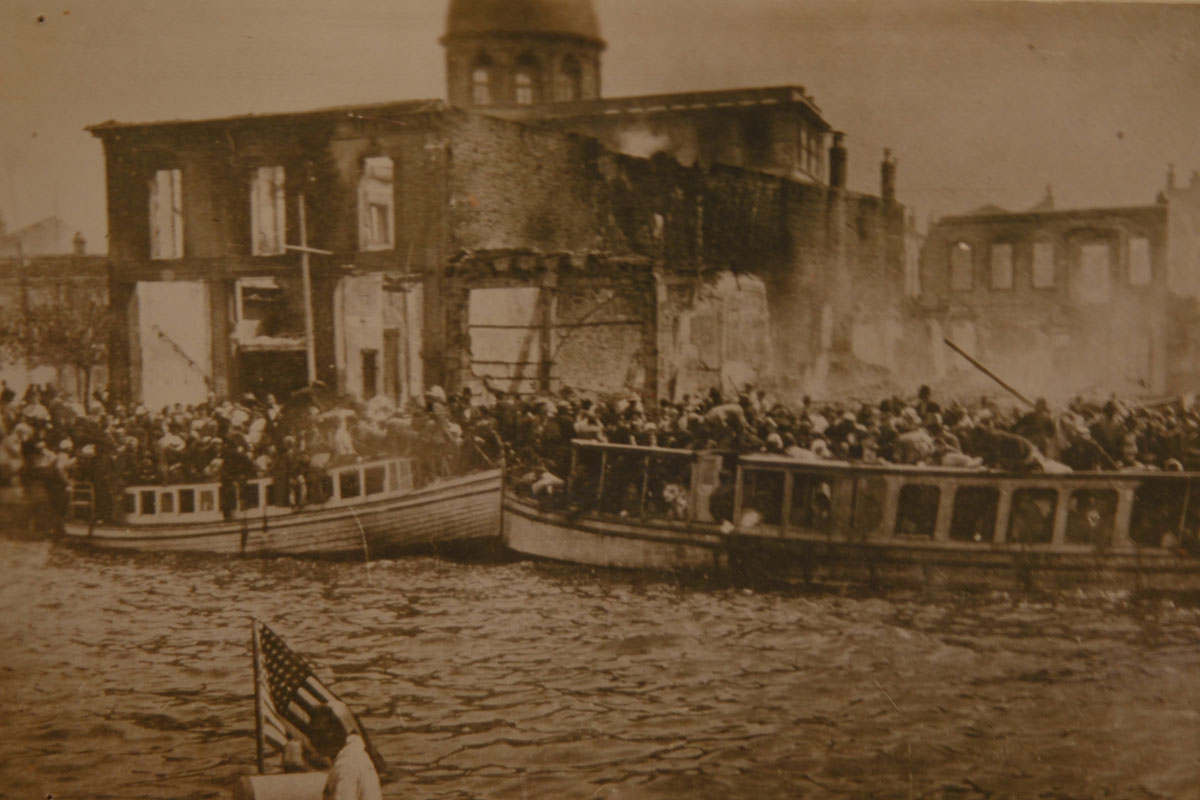 In his welcoming remarks, Tobias Myers, Associate Professor of Classics at Deree and Associate Director of the ACG Institute for Hellenic Culture and the Liberal Arts, presented the ACG 150 strategic plan. He stated that the Asia Minor Catastrophe is at the heart of the plan, which is still with the college since ACG has its origins in Smyrna. He said: “The past is with us and the present informs distant futures.” 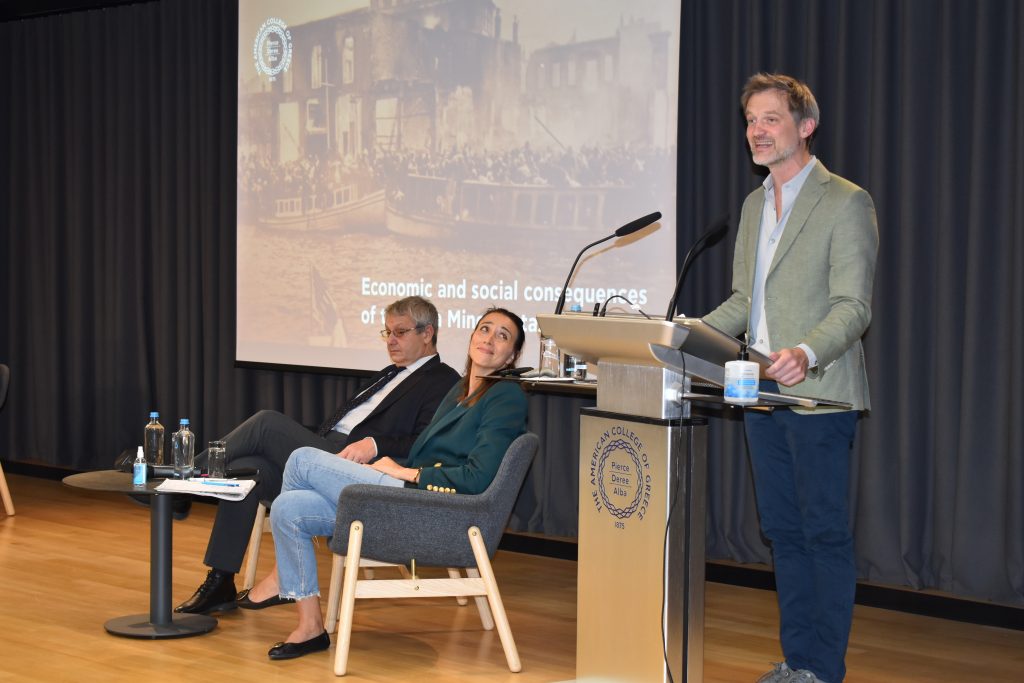 Lou Ureneck, Professor of Journalism at Boston University, 2016 Eleftherios Venizelos Chair Lecturer and the author of “Smyrna, September 1922,” presented a historical, comprehensive account of events in Smyrna during that calamitous month in 1922. His presentation was deeply insightful and took the audience on a vivid trip down the paths of time to the events of the Smyrna catastrophe. Showcasing remarkable story-telling and narrative skills, he brought the fateful events of 1922 to life. Mr. Ureneck pointed out the Smyrna catastrophe was the first genocide of the modern era and the most impactful event in modern Greece. 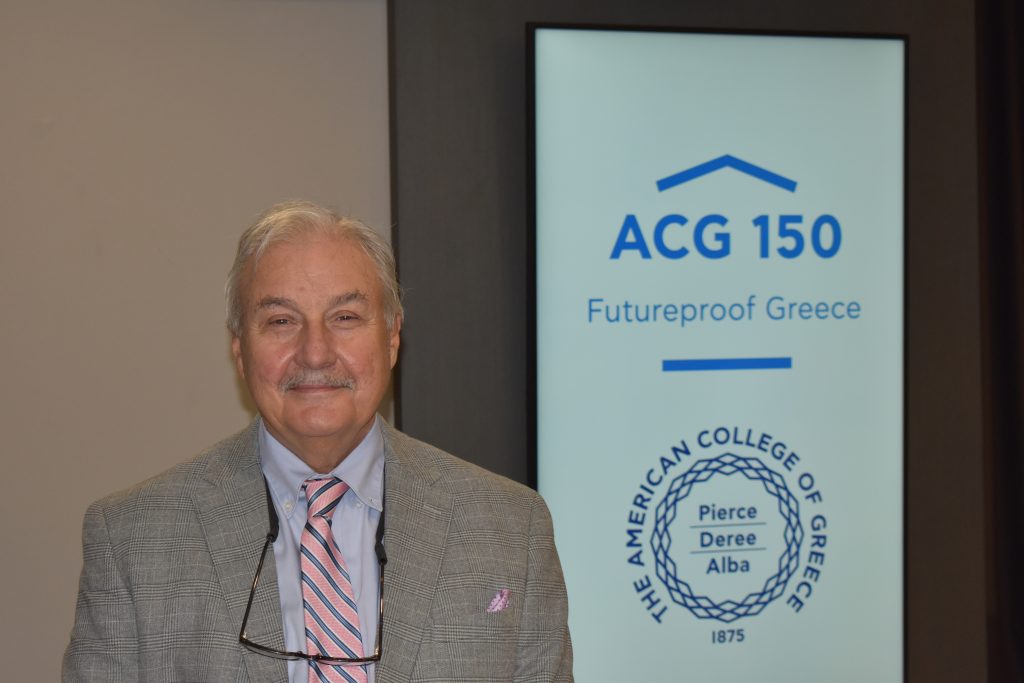 Evanthis Chatzivassiliou, Professor of Contemporary History at the University of Athens and the Secretary-General of the Hellenic Parliament Foundation for Parliamentarism and Democracy discussed the events of the refugee influx to Greece. He stated that the Greek nation was able to settle the refugees within one generation with the help of American philanthropic organizations and the League of Nations. Yet despite their shared culture, religion and language, there were economic conflicts between the refugees and locals since the newcomers were given land and jobs. Greece managed to settle without collapsing, and Dr. Chatzivassiliou noted that this was the greatest achievement in modern Greece. Prime Minister of the Hellenic Republic Eleftherios Venizelos’ “Megali Idea” brought an economic boom to Greece, where the country was looking to settle its disputes and lean towards joining Europe. Unfortunately, the Great Depression, WWII and the Greek Civil War did not enable this idea to come to fruition.

Michalis Psalidopoulos, Professor Emeritus of Economics at the University of Athens and previously Greece’s representative at the International Monetary Fund (IMF), and Chief Consultant & Chair of the Advisory Board of the ACG Institute for Hellenic Growth & Prosperity, outlined the economic turbulence in Greece between 1917-1932. By 1910, Greece was strong economically. Yet, in 1922, things took a turn for the worse since the nation needed assistance to settle the refugees. Greece took out a loan and combined with humanitarian relief, heavily invested in building its infrastructure. Within ten years, the refugees were settled, and Greece focused on a path to Europe. Despite its achievements, Greece would have to wait to become part of Europe since the Wall Street crash of 1929 wiped away all of these developments. Dr. Psalidopoulos stated: “Greeks get kicked and knocked out, but somehow we stand up and continue.”

The event closed with a lively discussion regarding Mr. Ureneck question of why is the Smyrna story not more widely known. Although there was no formal answer, it was pointed out that the Asia Minor catastrophe was a traumatic event and Greek historians prefer not to delve into it. In conclusion, the panelists pointed out, “Things in the past should be kept in mind in the present since societies do not learn from history, and we are destined to make the same mistakes.”

You can see the video from the event here: