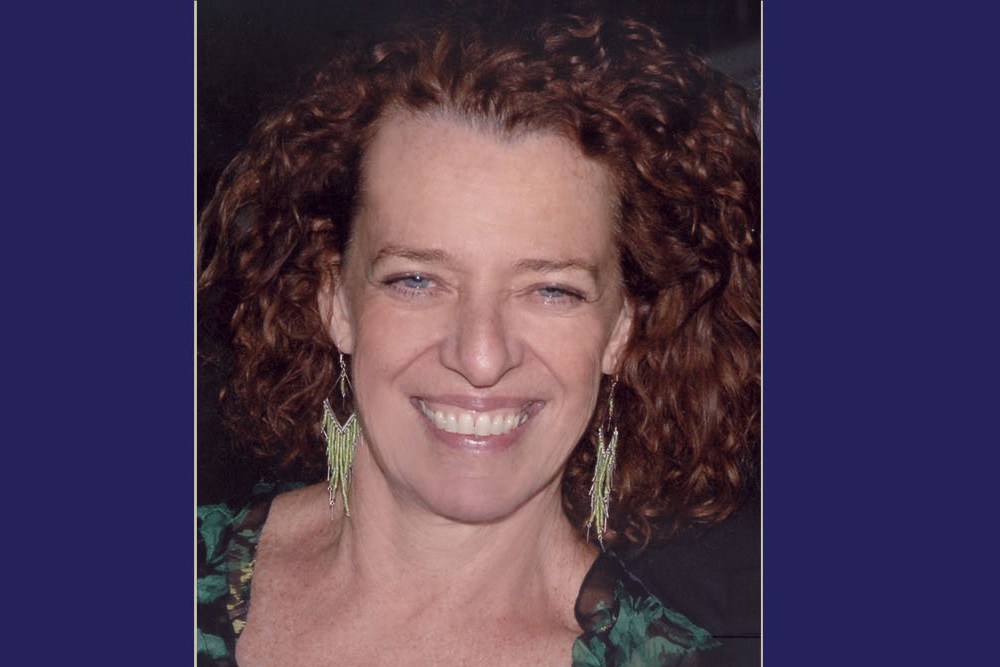 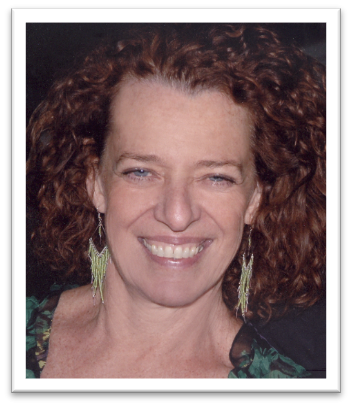 Dr. S. Sue Horner, Scholar in Residence, The American College of Greece and spouse of ACG president, Dr. David G. Horner, died on April 10, 2020 in Boston. The cause of death was a brain tumor first diagnosed in February 2019. She was 72 and died early on Good Friday morning of Holy Week in the Western Christian tradition.

Joining her husband at ACG in the summer of 2008, she will  be remembered for her sparkling blue eyes, contagious smile, personal warmth, and lively intellect, all of which made “Dr. Sue” a widely appreciated colleague by ACG faculty and staff as well as an engaging personality for both students and College constituents.

Born in Cleveland, Ohio in 1947, S. Sue Horner was the daughter of Charles and Ann Geeting. Her father, one of the pioneering pilots in U.S. commercial aviation, enjoyed a long career with American Airlines, concluding as an international 747 Captain and one of the airline’s most senior flight officers. Her mother, who recently celebrated her 100th birthday and resides in Dallas (TX), had primary responsibility for raising seven children and also worked as a school librarian. Relocating with her family from Olmsted Falls (OH) to Wheaton (IL) for junior high school, Sue graduated from Wheaton Central High School in 1966 and enrolled as a Romance Languages major at Barrington College (RI). Receiving her BA degree from Barrington College in 1970, she subsequently earned a MLS at San Jose State University, a MTS at Harvard Divinity School, concentrating in feminist, Latin American and African liberation theologies, and a PhD at Northwestern University in Religion and American Culture.

In 1979, she assumed a role that would define her personal and professional life for the next four decades when her husband accepted the presidency of their alma mater, Barrington College. Her early years as a “presidential spouse” coincided with the emerging societal understanding of women’s often underappreciated contributions and limited access to equal professional opportunities. She became a passionate advocate for corrective change in the recognition of women’s diverse roles in higher education and other contexts.

At Barrington College, she was founding director of the Center for Women’s Concerns, reflecting another distinctive, personal and professional theme – the intersection of feminism and religion. Studying with many of the leading scholars of feminism and religion in her graduate program at the Harvard Divinity School, she would ultimately earn a PhD at Northwestern University under the distinguished feminist scholar and Catholic theologian, Rosemary Radford Ruether. Her doctoral dissertation, Becoming All We’re Meant to Be: A Social History of the Contemporary Evangelical Feminist Movement, A Case Study of the Evangelical and Ecumenical Women’s Caucus, chronicled the development of an organization in which she played a leadership role. At North Park University (1987 – 2004), she complemented her presidential spouse duties with teaching as Associate Professor of Women’s Studies; many of her classes were taught in seminar format in the President’s House. She also taught for a semester at North Park’s partner institution in Jönköping, Sweden, co-led a student study trip to South Africa prior to the fall of apartheid, and was an international advisor on women’s issues at the 1991 World Council of Churches 7th Assembly in Canberra, Australia.

Joining The American College of Greece in 2008, Sue drew on her previous presidential spouse and teacher/scholar experience to craft a unique role that contributed to the life and development of the College while accommodating her frequent travel between the Horners’ homes in Boston and on the ACG campus in Athens. Deeply appreciative of ACG’s unique history as an institution founded by women missionaries from the United Church of Christ in 1875, she edited Not to Be Served, But to Serve, A History of The American College of Greece  (Giles Milton, 2011); conducted research and presented professionally on ACG’s founder, Maria West; sponsored the Harvard Prize Book Award, given at the Pierce graduation to the 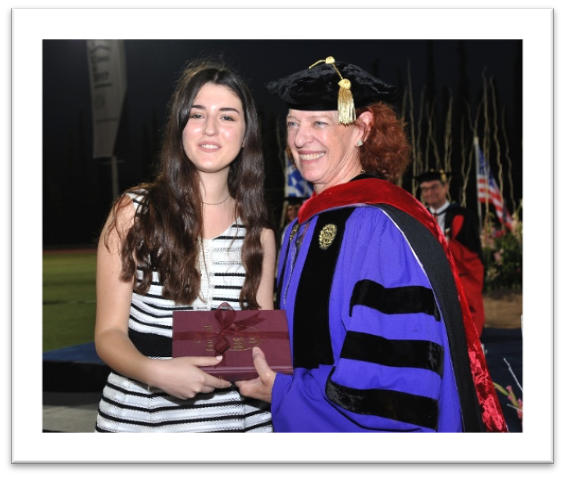 outstanding Beta Lyceum student; hosted the Harvard Prize Book recipient and a member of the student’s family at the annual October Harvard Prize Book Breakfast at the Harvard Club in Boston, and was instrumental in reestablishing the link between Pierce and its “twin institution”, the American Collegiate Institute (Izmir, Turkey). She oversaw the renovation of the President’s House, creatively incorporating a variety of pieces from ACG’s extensive contemporary art collection and positioning the historic home originally designed by Greece’s foremost 20th century urban architect, Constantinos Doxiadis, as a campus community resource hosting more than 1,000 guests annually. She also served as Chair of the College Art Committee and on numerous College public events organizing committees and accompanied President Horner on innumerable trips around the globe to elevate the visibility of and raise support for ACG. Given her academic background, the College archives held special importance and interest for Sue; her final tangible contribution to ACG was envisioning the recently completed (USAID funded) College History Digital Museum.

In three institutional partnerships with her husband as a presidential couple, Sue provided invaluable counsel and was an eloquent and fervent institutional ambassador. President Horner commented: “I cannot imagine a more influential personal life and professional partner. Sue challenged me on our first date as college students in 1967, and she never stopped stretching my mind and spirit in the 53 years that followed. Her final teaching moment was the calm grace she demonstrated in contending with her terminal disease. As an academic, she understood intuitively and could speak persuasively about the core missions of the institutions we were privileged to serve. As an informal institutional advisor, she gave me extraordinary insights without intruding in the official organization – a subtle and tricky balance. She managed the practicalities of our lives with superb organizational skill and enriched the circle of relationships that surrounded us. And, she was a ‘presence’, lighting up the institutional events she hosted or attended with her magnetic personality. She loved Greece and the people of ACG. On our last trip together back to Boston from Athens in February 2019, before we knew she had a serious health issue, we remarked to each other in the Athens Airport how fortunate we were to have been found by ACG. She passed into the light and love of God holding my hand, wearing an Alexander the Great T-shirt from the Plaka, with a Greek flag hanging on the shelf above her.”

Katerina Thomas, Dean of ACG’s Frances Rich School of Fine and Performing Arts, expressed the feelings of many members of the ACG community: “It is with deep sorrow that I heard of the passing of Dr. Sue Horner; she will be greatly missed by those who were lucky to have worked closely with her, especially in the context of the Art Review Committee which she chaired. The faculty and staff will remember fondly her insightful input, her inquisitive mind and positive energy. Dr. Sue Horner had a special gift of communicating with people with warmth and dignity that brought out the best in them. Her genuine love for the Arts, great sense of humor and dynamic presence always made working with her inspiring and enjoyable. Our thoughts go out to President Horner; may her memory bring him strength during this hard time, and courage to face the challenges of the future.”

On behalf of the ACG Board of Trustees, Board Chair, Jim Logothetis, stated: “The entire ACG community mourns the passing on to the Lord of our beloved Dr. Sue Horner. Her contributions to our institution were abundant – as a Scholar in Residence, as a presidential spouse and as a fervent and tireless ambassador of ACG.  She will be forever remembered and cherished by those of us who had the pleasure and privilege to know her as well as those who have and will continue to benefit from her love and dedication to President Horner and the rest of the ACG family. Our heartfelt thoughts and prayers are with President Horner and his family during this difficult time. May her memory be eternal.”

A memorial service will be held at a future date at Old South Church, 645 Boylston Street, Boston, MA, a congregation with a historic connection to ACG and the local church home of Sue and David Horner since 2005. Donations in Sue’s memory may be made to the Dr. S. Sue Horner Lectureship in Gender Studies and Religion, The American College of Greece at https://www.acg.edu/giving/how-to-make-a-gift/.

In honor of Dr. S. Sue Horner’s contributions to The American College of Greece, the College flags will be flown at half-mast for thirty days and a campus community reception will be organized when circumstances allow.

PEACE BE TO HER MEMORY.