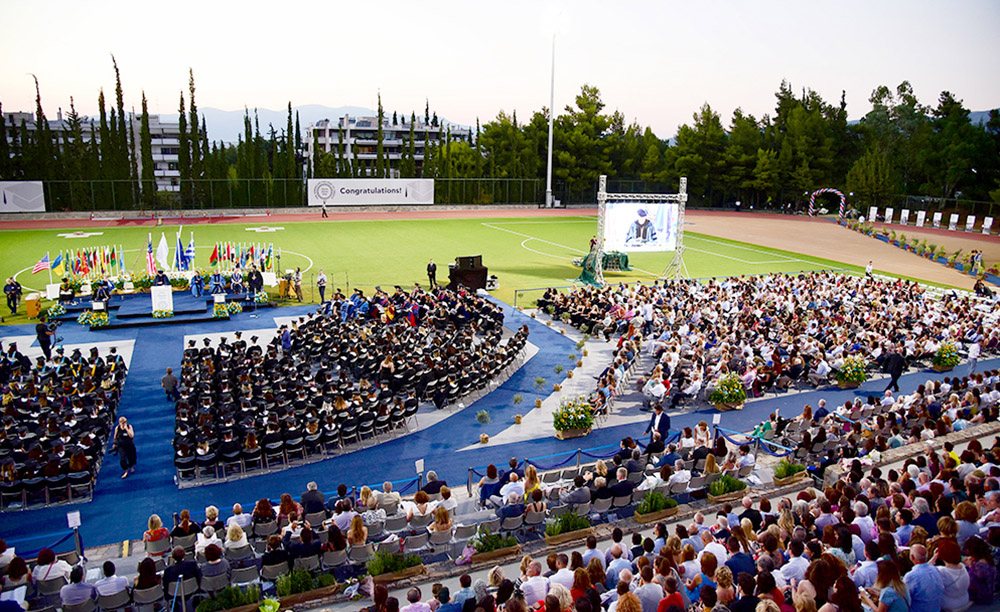 Deree Commencement, the biggest event on the ACG calendar and a milestone in every graduating senior’s life, celebrates the perseverance of those students whose hard work has led them to this unique occasion, their graduation day!

And so, on Saturday, June 29, nearly 3,000 guests came together at the ACG Stadium where 350 graduating students were applauded for their years of hard work, perseverance, and determination as they received their bachelor’s and master’s degrees.

Dr. David G. Horner, President of The American College of Greece, welcomed the graduates, along with the Board of Trustees, ACG faculty and staff, and the families and friends of the graduates to the 2019 Deree Commencement Ceremony:

“The future success of tonight’s graduates will be built on the preparation they have received at The American College of Greece as well as on the loving investments of family, friends, teachers and others who have encouraged and sustained them. And so, we especially welcome those present as well as those here in spirit who have made this moment possible.”

The President went on to introduce the Ambassador of the United States Embassy in Greece, Mr. Geoffrey R. Pyatt, and thanked him for all his efforts to advance the cause of The American College of Greece. The Ceremony progressed with the introduction of this year’s Honorary Degree Recipient, George M. Marcus, a distinguished business leader and philanthropist who founded GM Marcus & Company in 1971, which later became Marcus and Millichap Company, as well as Essex Property Trust, Greater Bay Bancorp and Plaza Bank of Commerce.

Upon receiving his honorary title, Dr. Marcus emphasized that striving for excellence is the one ingredient necessary for success and reminded the graduating class that, even in difficult times, there is always an opportunity waiting to be discovered and seized.

It was an emotional moment when Communication major Eirini Paraskevaidou addressed her classmates and delivered the Student Address. Expressing her gratitude to have studied at an institution that allowed her endless opportunity to explore “what it means to be us, as individuals, as contemporary global citizens”, Eirini bid farewell to faculty, fellow graduates, and to all those who made her time at Deree a source of inspiration and a unique experience.

Excitement alternated with praise as each individual graduate was called upon the stage for the Conferral of their degree of Master of Science, Master of Arts, Bachelor of Science and Bachelor of Arts. President Horner delivered the closing Charge to the newly minted graduates who entered the 56,000-strong ACG global alumni community! The night sky of Aghia Paraskevi lit up with bright fireworks to seal a Ceremony unforgettable to graduates, families and friends who honored it with their presence.