Last night, Saturday, June 25, we celebrated the accomplishments of our hard-working and inspiring students leading up to the wonderful moment of their graduation and commencing a new beginning.

More than 300 undergraduate and graduate Deree students from 18 countries were awarded their degrees, joining the ACG family of over 52,000 alumni across the globe. The graduating class was cheered on by over 2,500 guests, including family, friends, and ACG staff, faculty, and the Board of Trustees. Among the guests were also ambassadors and embassy representatives of several countries, as well as journalists and dignitaries from the political, cultural, and business spheres. A wonderful surprise was the presence of Mikis Theodorakis, Greece’s legendary composer, and an ACG honorary degree holder, who was there to celebrate his grandson’s graduation. In honor of Dr. Theodorakis’ presence, the Commencement Ceremony also included a short musical interlude.

President Horner welcomed the students and guests to the ceremony and highlighted its significance saying, “On a scale of one to ten, the importance of this event in my view is a ten! It’s a ten to our students, to their family and friends and to the faculty and staff of the College who have had the privilege of working with tonight’s graduates over several years.” The Ambassador of the United States Embassy in Greece, David D. Pearce, greeted the audience, advising the graduating class to always bring out the best in themselves and in others and to give back to their communities.

During his career, Meehan has served as Deputy Secretary of State for securities and corporations, First Assistant District Attorney for Middlesex County, and has represented the 5th congressional district of Massachusetts in the U.S. House of Representatives for 14 years. Meehan was then elected Chancellor of UMass Lowell, and after 8 successful years of leading the campus on its rise to top-tier national university status, he was elected to the presidency of the 73,000-student University of Massachusetts system in 2015.

Marty Meehan was awarded the honorary degree of Doctor of Laws, honoris causa, for his contribution to education and politics. President Meehan addressed the graduating class and talked about how impactful multiculturalism is in the development and formation of society. Meehan shared this advice with the graduating students saying, “When you take off that cap and gown, work hard to help your country embrace innovation, and as you do, commit to innovative thinking in your own lives. Now more than ever, we need you to embrace innovation, diversity, and new thinking.” He urged the graduating class, “don’t be afraid to step onto the battlefield of ideas. As you set goals for yourself and think about what you want to accomplish, be true to who you are. But always be an active listener. You’ll be surprised how much you can learn when you listen. Your lives will be richer, and our world will be so much stronger for it.”

Graduating Communication student Dimitris Lykouris, addressed the audience and his fellow graduates saying, “At Deree knowledge blooms and opportunities thrive, our education has given us the chance to experience the world through our own eyes, and to better understand ourselves so that we can face the challenges ahead with ethos, courage, and confidence. From simple members of society, we have become citizens of the world.” On behalf of his fellow graduates, Dimitris thanked friends, family, and ACG staff and faculty for their support, and urged the Deree Class of 2016 to “Take courageous risks. Change the world for the common good, and see this day as one of your many accomplishments to come.”

For many of the graduates, their next accomplishment is nearing on the horizon having already been accepted to world-class universities ­–including UCL, Cass Business School, LSE – for graduate studies, while others have been successfully employed at leading international companies, even before their official graduation!

President David G. Horner awarded the graduating students with Bachelor and Master degrees and addressed the 2016 Deree Class saying, “This moment belongs primarily to you. While others helped to bring you to this place, it is you who claimed this investment and made it your own. Now you stand at the threshold of a future you must also claim as your own. Graduates of 2016, we are proud of your accomplishments; we are the better for our association with you as colleagues in learning, and we send you forth in confidence to share your considerable gifts with a world that needs the contributions that you, uniquely, can offer!”

With a degree in their hands, over 300 new alumni threw their graduation caps up, while balloons, confetti, and cheers filled the air! The Commencement Ceremony is a night to celebrate the accomplishments and excellence of the next generation of leaders, giving us all hope for a brighter world.

We wish you the best of luck in your next steps, and wish that your future is full of hope, opportunity, and inspiration. As Socrates said, “Education is the kindling of a flame, not the filling of a vessel.” Keep feeding the flame, and never stop learning, growing, and exploring! 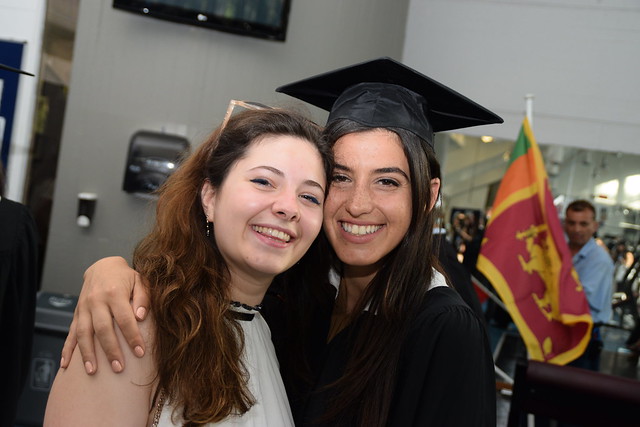