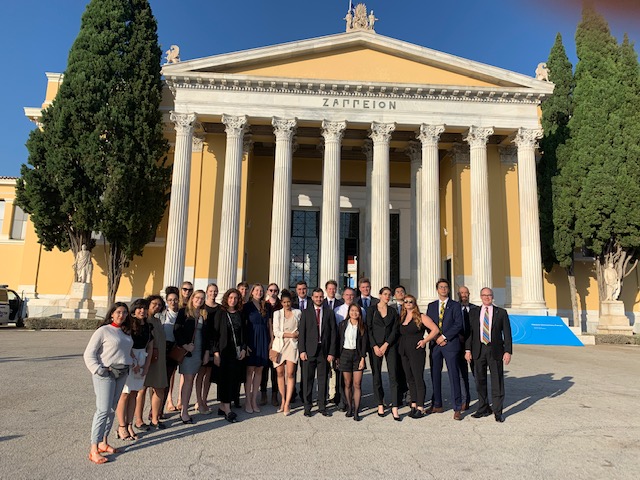 For three days, from October 9 to 11, 2019, leading policy makers, business leaders, scholars and other experts, gathered at this year’s Athens Democracy Forum to discuss – as the event’s main theme suggested – “new models for our changing world”. The event was hosted at Zappeion, the Old Parliament House, Stoa of Attalos, and Hotel Grande Bretagne and was organized in association with The New York Times (NYT), under the auspices of the United Nations Democracy Fund, and the city of Athens.

True to its tradition of supporting initiatives for a better world, Deree – The American College of Greece was joined by the Global Liberal Arts Alliance (GLAA) as Education Partners for the Athens Democracy Forum. The Global Liberal Arts Alliance, is an organization of 30 American-style liberal arts institutions – including Deree – representing 18 nations, with the goal of supporting excellence in liberal arts education on a transnational basis.

A group of 20 students representing 19 colleges of the GLAA in 10 countries, including two Deree students, attended the forum and actively engaged in a variety of events. The students were supervised by the President of GLAA, Dr. Mickey McDonald, Coordinator of the GLAA, Dr. Simon Gray, and Deree Faculty, Dr. Antonis Klidas.

On Friday, October 11, the students sat at the Global Goals Luncheon and Workshops during which the students were asked to record the conversations and frame important comments to be used in a summary report intended for the Athens Democracy Forum website.

The students made their presence felt throughout the event, as after each panel they were allocated the task to ask the first question to the panelists, whereas two videos produced by two student participants featuring their views on multiculturalism and inclusion and the role youth can play in restoring faith in democracy were displayed prominently at the beginning of the respective panel discussions.

The students were hosted by Deree for a week during which they engaged in intensive discussions revolving around the Forum themes and also had the opportunity to visit the Acropolis and the Acropolis Museum. A highlight of the week was the students’ meeting with the UN Secretary General’s Envoy on Youth, Mrs. Jayathma Wickramanayke, who visited Deree campus on Wednesday, October 9 and discussed with the students ways in which young people can be engaged in grassroots local initiatives to make a positive contribution to their communities.

Congratulations to all students for participating and tackling some of the critical topics the world is facing in these challenging times!