At the theater foyer, DEREE students, alumni, faculty, and guests who attended the event were offered a tricky “treat”: Xenophobil, a pack of chewing gums resembling a box of pills for xenophobia relief. Although the creative gimmick is unfortunately not the panacea to xenophobia, it served as the perfect introduction to the live performance that followed.

Following the provost, the ambassador of Norway to Greece, Jørn Gjelstad, took the stage to talk about the contribution of art and culture in helping us value diversity. “Dance Banoptikon is an innovative performance that demonstrates how art can build bridges,” he said, adding that his country is committed to supporting such initiatives through the EEA Grants, with the grants’ allocation to Greece doubling over the next year to reach €120 million.

Right after the remarks, lights went out and Dance Banoptikon began: dancing, reading, video, and sounds finely weaved the most powerful narration of the immigrants’ life adventure. The harsh environment of the video game served as an intense canvas in front of which the Dancevacuum dancing team – Greek dancers and immigrants – gave life to the experiences of the immigrants’ hopeless journey: the lack of communication due to language differences, the desperate call for a job, the rise of prostitution and human trafficking, the feeling of wandering from port to port with no destination and no goal.  As it escalated, the performance started an open, non-verbal dialogue with the audience, forcing it to face the harsh reality of an immigrant’s everyday life.

The performance was followed by a panel discussion and speakers addressed the issue from artistic, political, and sociological perspectives. Daniel Esdras, director of IOM (International Organization of Migration) Greece, highlighted the fact that the situation faced today is much worse than what was presented in the performance. “Today, 7,000 people daily try to enter Greece illegally,” he said highlighting the need to deal with the problem in its root. “We need to stop war. Emptying Syria of Syrians is not a solution,” he supported, adding that helping poor countries may sound utopic but it is the single solution to the immigration issue.

Ilias Marmaras, the creator of Banoptikon video game, focused on the game development, which started back in 2010 as part of the European research project [email protected] He referred to Banoptikon as an “experiment, aiming to disseminate the results of an academic research on migration flows and how these use networks.”

Dr. Chryssa Zachou, professor of Sociology at DEREE, focused on the multiple factors affecting the immigrant experience and highlighted the fact that integration is a variable process, as the experience itself varies from person to person based on cultural, socio-economic, and family status or age, cultural differences etc. She also commented on the use of advanced technology amplifying the immigrants’ feeling of “being watched all the time.”

Mr. Arapakos from PRAKSIS Center for unaccompanied minors and Michael Afolayan from ANASA African Cultural Center talked about activities, workshops and art events organized by the centers toward building cultural bridges of communication between people, cultivating the feeling of integration as well as raising awareness on immigrants’ rights.

The American College of Greece, as an educational immigrant fleeing the Smyrna catastrophe almost 100 years ago, feels honored to support initiatives that put issues of social responsibility, social awareness, and human rights on the stage – starting from the Blackbox Theater stage. 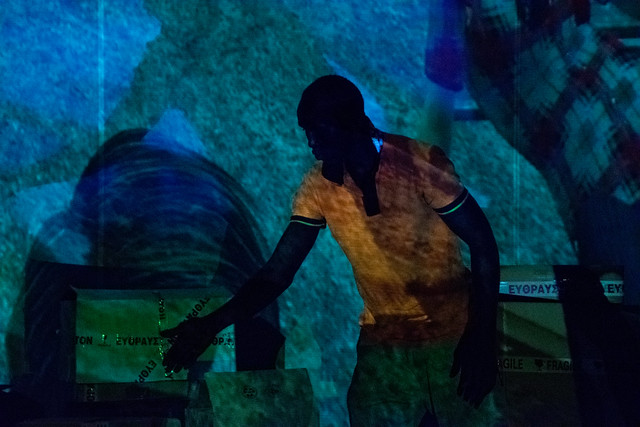