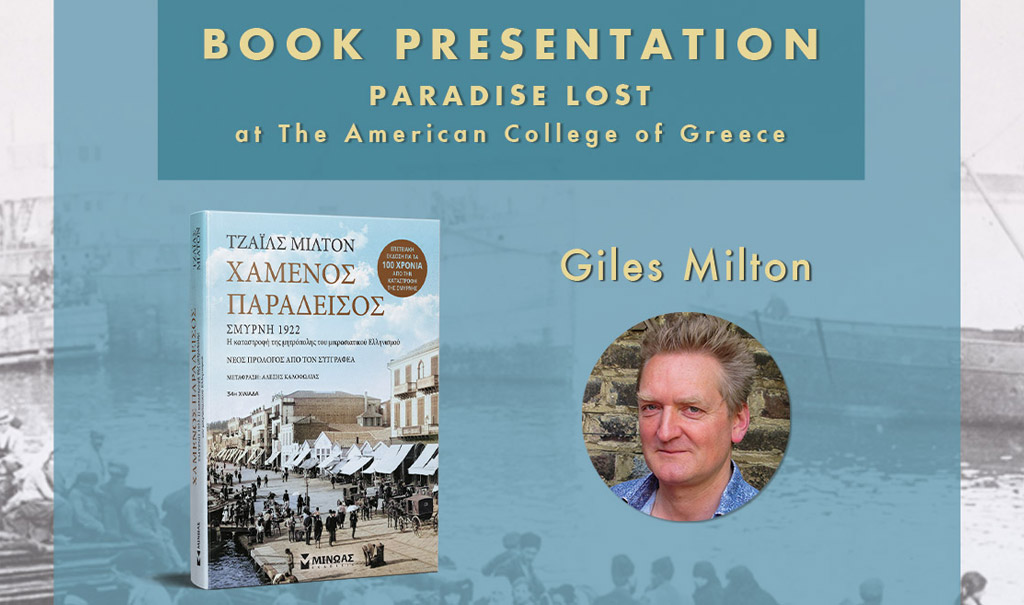 A book presentation on the occasion of the 100th anniversary of the Smyrna Catastrophe When: Monday, October 3, 2022 | 18:30-20:30 Where: ACG Events Hall, The American College of Greece 6 Gravias Street,

Organized by
Institute for Hellenic Culture & Liberal Arts, The American College of Greece
in collaboration with
MINOAS Editions

About the event
On the occasion of the 100th anniversary of the Asia Minor Disaster, acclaimed author and journalist Giles Milton will present the anniversary edition of his book, Paradise Lost. Spyridon Ploumidis, Associate Professor at the Department of History and Archaeology at the National and Kapodistrian University of Athens, will participate in a discussion with the author. Haris Vlavianos, ACG Professor of History, will be the moderator.

The event will be in English.

But the reality refuted even the most ominous prediction. What happened over the next two weeks must rank as one of the most compelling human dramas of the twentieth century — the drama of uprooting thousands of refugees whose blood flows in the veins of many Greek families today. Almost two million people were embroiled in a disaster of truly epic proportions.

Paradise Lost is a powerful story of disaster, heroism and survival, told in the narrative verve that has made Giles Milton a bestselling journalist and writer. It unfolds through the memories of the survivors, many interviewed for the first time, and the eyewitness accounts of those who found themselves caught up in one of the greatest catastrophes of the modern age.

Bio of the Author 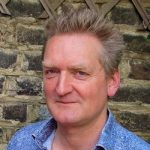 Giles Milton was born in Buckinghamshire, UK, in 1966 and was educated at Latymer Upper School and the University of Bristol. He is an internationally best-selling author specializing in narrative history who takes an event from the past and makes it come alive. Milton’s works of narrative history rely on personal testimonies, diaries, journals, and letters to make sense of key historical moments recounted through the eyes of those who were there. His books have been translated into more than twenty languages.

Russian Roulette (Minoas, 2014) recounts the secret service’s early days and British spies’ attempt to thwart Lenin’s revolution. In Churchill’s Ministry of Ungentlemanly Warfare (Minoas, 2017), the author narrates the story of a top-secret organization founded in London whose purpose is to plot the destruction of Hitler’s war machine through spectacular acts. D-Day (Minoas, 2019) recounts the events that led to the largest military landing in World War II. “Checkmate in Berlin” (Minoas, 2021) is an immersive story of the race to seize Berlin in the aftermath of World War II. Minoas publications also publish the following Milton works: The Perfect Corpse (book, 2017), “Wolfram: The Boy Who Went to War” (story, 2011), and Edward Trencom’s Nose (novel, 2008).

Learn more about the author HERE