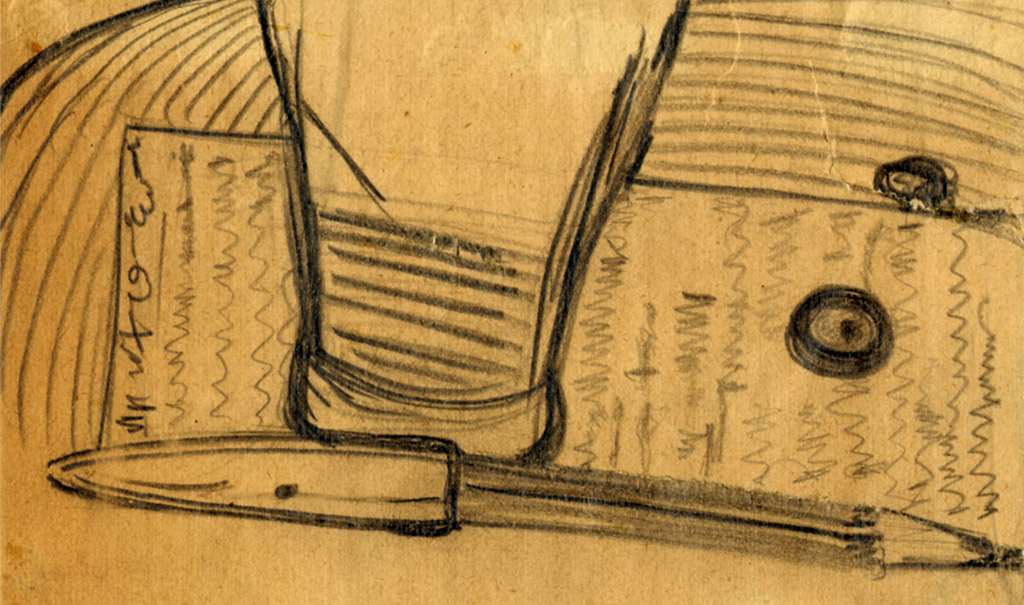 An exhibition curated by Galini Notti at Radio Athènes in collaboration with ACG Art Collection and  Deree – The American College of Greece When: January 29-March 12, 2023 Opening:

Organised by: The Frances Rich School of Fine and Performing Arts in collaboration with Radio Athènes

The Frances Rich School of Fine and Performing Arts at Deree – The American College of Greece in collaboration with Radio Athènes presents the exhibition Nikos Velmos (1890-1930) Drawings curated by Galini Notti at Radio Athènes, in Plaka, Athens. The exhibition presents a selection of Nikos Velmos’s drawings from The American College of Greece Art Collection, which includes 438 drawings donated by the collector Takis Efstathiou. It is the first time that part of Velmos’s drawings is being exhibited 93 years after his death.

Nikos Velmos (1890-1930, Athens, Greece), pseudonym of Nikos Voyatzakis, was a self-taught artist with a diverse, critical and socially engaged approach to the arts and politics. He was involved in theater, literature and painting. In 1926 he started publishing the journal Frangelio (The Scourge) in which he criticized the hypocrisy and the establishment of his epoch but also included literary writings of his own along with these of other noteworthy poets and writers. Apart from the main magazine, in 1927 Velmos published a supplement called Filla Technis (Art Papers) of Frangelio. These were monographs on Greek and international artists such as El Greco, Beethoven, Yiannoulis Chalepas or thematic issues as for instance οn self-taught artists. The publication of Frangelio lasted until 1929.

In 1928 Velmos opened an art space on the ground floor of his house, at 21 Nikodimou street in Plaka, which he named Asylon Technis (Art Shelter). In Asylon Technis Velmos organized exhibitions of established artists such as Yiannoulis Chalepas and Dimitris Galanis, educational exhibitions as the one on El Greco with print reproductions and copies by renowned Greek artists, as well as exhibitions of self-taught artists like himself. Yiannis Tsarouchis first exhibited in Asylon Technis. The exhibitions of self-taught artists aimed not only at the recognition of important yet overlooked artists but also opposed the academicism of his era. Asylon Technis and Frangelio were particularly important for the art life of Athens at the time. In addition to the exhibitions in Asylon Technis conversations on artistic and sociopolitical issues were being organized. It became a hub for the most prominent art personalities of this period, such as Stratis Doukas, Fotis Kontoglou, Spyros Papaloukas, Aghinor Asteriadis, Giulio Caimi, and Dimitris Pikionis – the avant-garde of that time which paved the way for the forthcoming generation of the 1930s.

Regarding the painting of Nikos Velmos, many of his drawings are illustrations for Frangelio. He painted the persons close to him, his friends – many of them were his contemporaries – everyday people, the poor and the outcasts whose hardship he could feel. He also painted landscapes, trees, animals, decorative patterns, set designs, theatrical scenes, saints.

The drawings of Nikos Velmos depict their epoch, Greece after the Asia Minor Catastrophe, but they are both historical and contemporary. They express his deep connection with people and life, his subversive ideas and point of view on art. He approached art, politics and life as a whole. He didn’t distinguish between the arts. Art and life were interrelated for him. He wrote, “Art comes from the experience of life”* in a text about the actor, theater director and his teacher Thomas Economou. He relied on self-organization and his friends, he was hands-on, and he created a framework and a network for the recognition of people and works he considered noteworthy but marginal. He didn’t seek to gain renown through his actions but was interested in defending his ideas against all forms of power and standing by the side of the poor and weak. All his life, action and art were a battle fought with different means, for a fairer world.

The current exhibition comprises many persons and places, taverns, graveyards, the house of Rodakis in Aegina, Panormos in Tinos where he went to meet Chalepas, Athens, Mount Athos. It approaches the work of Nikos Velmos as contemporary work. It is presented at Radio Athènes in Plaka, near Nikodimou street, where Asylon Technis used to be, and is being held thanks to the support and trust of the Frances Rich School of Fine and Performing Arts at Deree – The American College of Greece and Radio Athènes.

Galini Notti (b. 1980) is a curator who lives and works in Athens, Greece. In 2020, she curated the show Statues that don’t move, don’t speak, don’t laugh in three public squares in Athens. She has also curated one of the “Top Tens” for the project Shadow Libraries: UbuWeb in Athens at Onassis Cultural Centre, the exhibition Survey in the context of Art-Athina 2017, co-curated the show (Im)material Gestures as part of the project PIIGS_An Alternative Geography of Curating at Fondazione Sandretto Re Rebaudengo in Turin, curated the exhibition Overseas at The American College of Greece in Athens and the show Fireworks out of Season – Riviera at the Riviera open-air cinema in the Exarcheia neighborhood of Athens.

About the ACG Art Collection

The American College of Greece Art Collection (ACG Art Collection), is an organic part of the educational mission of the College and is the result of diligent support of emerging and established artists – the majority of them of Greek origin – and of donations and bequests. It is an extensive collection of fine and decorative arts which numbers approximately 4,500 artworks of various media and objects from Antiquity to the present. The majority of the works of the collection are on permanent display in the interior and exterior spaces of the college premises. During the annual exhibition, which is held as part of the annual Arts Festival at the ACG Art Gallery, invited artists and curators are encouraged to explore and make use of the collection. The collection is accessible to academic researchers, students, art professionals and the general public, and serves as an educational and research platform.

Radio Athènes, Institute for the Advancement of Contemporary Visual Culture, is a book project, a showroom, an exhibition space and a curatorial practice. Flexible, independent, nomadic, interdisciplinary, Radio Athènes works together with emerging, established and under-recognized artists from around the world to present exhibitions, lectures, screenings and readings in the fields  of contemporary art, literature, philosophy, dance and the applied arts. It is dedicated to new ideas, and experiments with formats that challenge our perception of art. Recent projects include the archiving and contextualization of the work of Bia Davou and Pantelis Xagoraris, Greek artists working in the 1970s, largely unknown outside our geographic coordinates; the creation of www.radioathenes.tv , a site serving up a collective experience to dispersed viewers in collaboration with designer David Reinfurt; and Always Starts with an Encounter: Wols—Eileen Quinlan (co-published with Sequence Press), a book reflecting on two artists from different centuries that have been exploring the material boundaries of the photographic process. Radio Athènes was founded by Helena Papadopoulos in 2015.

Special thanks to Aristide Antonas and ASFA for lending us one of the display cases from the Vitrines Project (2017) especially designed for Documenta 14; Socratis Loupas for sharing his knowledge on Nikos Velmos; Diamantis Karavolas; Takis Efstathiou; Dr. Katerina Thomas; Effie Halivopoulou; Ioanna Papapavlou; Niki Kladakis; and Dessy Griva.