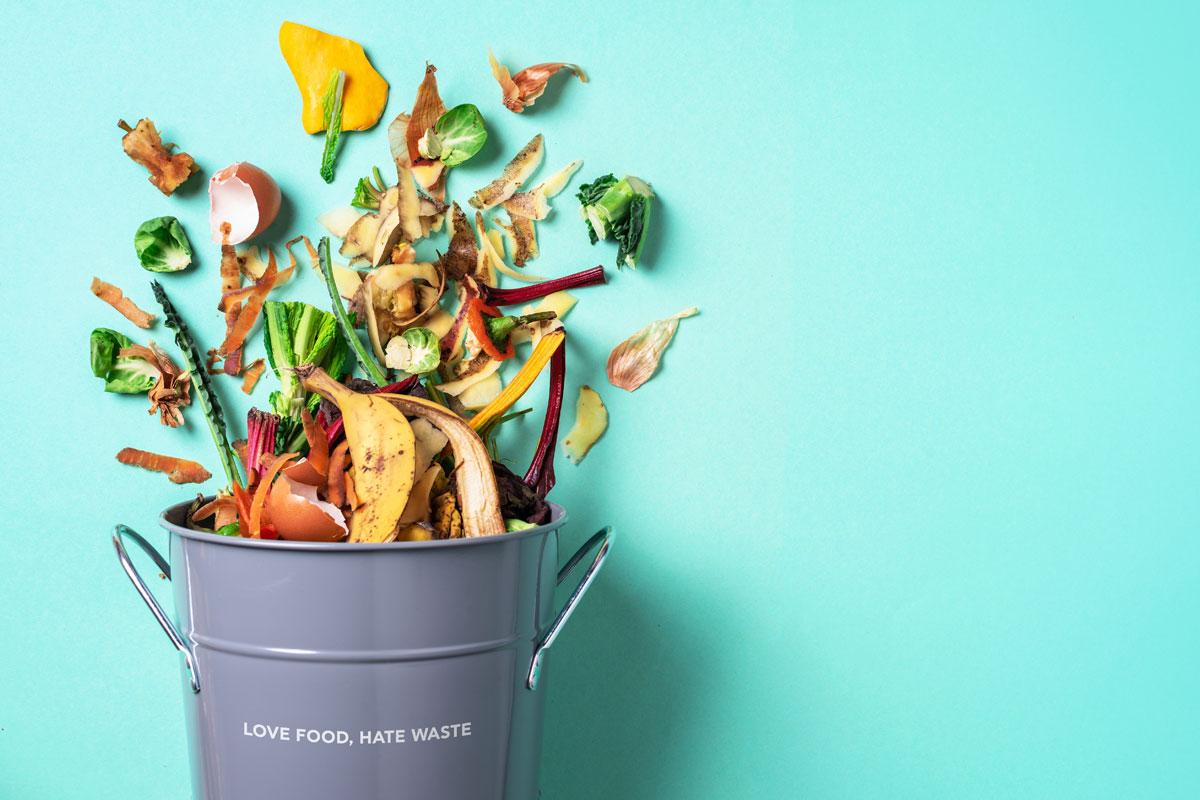 When: Thursday, October 14, 2021 | 14:00 – 15:30 (Greece) Where: Deree Student Lounge & Deree Main Corridor Organized by: Office of Public Affairs, The American College of Greece Boroume Deipnosofistirion Catering In collaboration with: Center of

In collaboration with:
Center of Excellence in Sustainability at The American College of Greece

Serving as the kick-off event to the campus-wide “ACG Food Waste Campaign: Reduce your FOODprint!”, this interactive discussion aims at raising awareness about the importance of reducing food waste and food loss at all stages of the supply chain (farmers, farmers’ markets, restaurants and catering, end consumer, etc.).

Parallel to the discussion, student volunteers from the ACG Sustainability Leaders, the ACG SDG Student Hub, and the Deree Environmental Studies Society will play homemade videos with tips on how to reduce food waste while cooking at home!

This is a certified sustainable event.

Did you know that 1/3 of all food globally goes to waste? Wasting food also means wasting the water used to produce the food and the land on which the food has been produced (28% of the world’s agricultural land), while 9.9% of the human population is undernourished. Due to food wastage billions of tons of CO2 emissions are released into Earth’s atmosphere, contributing greatly to climate change. (fao.org)

According to UN’s Food Waste Index Report 2021, Greek people waste on average 142 kg of food annually, one of the highest in the world.

ACG is dedicated to reducing food waste both on campus and in the broader community. Since November 2018, the College has been collaborating with the NGO Boroume. In the context of our collaboration, we have adopted a farmers’ market – the ACG Farmers’ Market – where students, staff, and faculty volunteer on a weekly basis and save food that would otherwise end up in the landfill. From November 2018 until now, our volunteers have saved over seven tons of food by offering 522 hours of community service!

As of October 2020, ACG is a member of the Alliance for the Reduction of Food Waste, a group of public authorities, well-known companies, food and service businesses from all areas of the supply chain, social impact organizations, and academic and research institutions, coming together to prevent and reduce food waste in Greece, aiming at raising awareness, educating the public, highlighting and disseminating best practices, exchanging knowledge and ideas, promoting research and innovation, promoting and donating any surplus food to social impact organizations, and, most importantly, advocating for public policy on preventing and reducing food waste and food loss in Greece.

This academic year, in tandem with the EU Directive 2018/851 and subsequent national law, we are taking it one step further by launching a campus-wide campaign on reducing and preventing food waste!

“The ACG Food Waste Campaign: Reduce your FOODprint!” aims at raising awareness about this critical issue and educating our community on best practices on how to save food.

Booth #1: Deree students from the ACG Sustainability Leaders, the ACG SDG Student Hub and the Environmental Studies Society showcase already prepared foods made out of food scraps and/or very ripe fruits and veggies and videos from the cooking process!

Bios of Speakers (in alphabetical order) 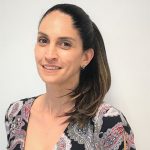 Stella Apostolaki, PhD
Chair of the Academic Advisory Board of the Centre of Excellence in Sustainability
Assistant Professor, Coordinator of the Environmental Studies Program, Department of Science and Mathematics, Deree – ACG

Dr. Stella Apostolaki, is Chair of the Academic Advisory Board of the Centre of Excellence in Sustainability at The American College of Greece (ACG), Assistant Professor and Coordinator of the Environmental Studies Program, Department of Science and Mathematics, Deree – the American College of Greece. She is teaching a variety of environmentally focused courses in the respective Program and in the Honours Program at Deree – ACG. She has prepared and delivered lectures, seminars and environmental awareness raising programs addressed to different audiences, including all educational levels and the wider public. She holds a BSc/(Hons) in Environmental Science, an MSc in Urban Water and Environmental Management and a PhD on sustainable urban drainage systems and river management options, obtained from the University of Abertay Dundee, Scotland – U.K, under funding received by the Environment Agency for England & Wales, in collaboration with the Scottish Environment Protection Agency (SEPA), and by HR Wallingford Consultants.

She has a wide research experience, she is expert evaluator of Call for Proposals for European Commission, has worked as a researcher in collaboration with Universities and Authorities in Greece and in the U.K., and has participated in numerous EU funded projects. She collaborates as external consultant with several entities such as the Green Fund of the Hellenic Ministry of Environment and Energy in the project LIFE-IP AdaptInGR – Boosting the implementation of adaptation policy across Greece, the ATHENA Research Centre, the UNSDSN Greece & Climate KIC Greece, the International Centre for Research on the Environment and the Economy (Icre8), P.S.G Environmental Geo-Exploration Ltd. She is also an Expert under the Body of Knowledge of EIT Climate KIC & Food on Water Scarcity in Southern Europe. Her main research interests are on integrated water management and innovation, sustainable development, sustainable stormwater management, climate change, conservation of biodiversity, ecosystem restoration, public awareness – stakeholder engagement methods and public education, green urban planning with emphasis on amenity and biodiversity and on the implementation of the United Nations Sustainable Development Goals. 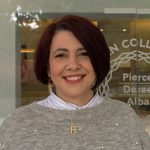 Rania Assariotaki joined the American College of Greece in 2008. She currently holds the position of Senior Manager for Sustainability, Office Public Affairs. She has previously occupied the position of the first Sustainability Manager at ACG. Before joining ACG, she has served in the field of customer service. She holds an MSc in Marketing from ALBA at The American College of Greece. Since December 2020, serves as an ex-officio member in the Academic Advisory Board of the ACG Center of Excellence in Sustainability. Under her coordination, in 2020, ACG was awarded with the STARS Gold rating by the Association for the Advancement of Sustainability in Higher Education. Since September 2020 she participates as a mentor for sustainability issues in the mentorship program of the Association for the Advancement of Sustainability in Higher Education (AASHE). In February 2021, she was appointed by AASHE to serve as a member of the AASHE Advisory Council for her constant commitment and support to promoting sustainability best practices and culture on and off campus. The Advisory Council is an advisory body whose input often has a significant impact on staff and board decisions of AASHE. In February 2020 became a member of the Corporate Responsibility Committee of the American – Hellenic Chamber of Commerce. In 2015 she was certified as a GRI G4 reporter and in July 2016 received her certification as a Sustainability (CSR) Practitioner approved by the Institute of Environmental Management and Assessment (IEMA). Also, she has received certifications in: Carbon Reduction Strategy, Sustainability Reporting, Social Impact Assessment & SROI.  In August 1019, she has been certified as a Sustainability Management professional and on High Impact Leadership from the Institute for Sustainability Leadership, University of Cambridge. 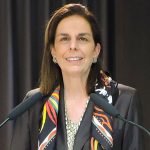 Claudia Carydis Benopoulou is Vice President of Public Affairs at The American College of Greece (ACG) since June 2012. Her responsibilities include government relations and cultivating mutually beneficial relations with key stakeholders of both the private and public sector. She also supervises College Events and the work of two separate ACG entities: The Institute of Global Affairs and the Institute of Public Health. As part of her portfolio, Claudia oversees the reporting and implementation of sustainability best practices at ACG. Under her leadership, in 2020, ACG was awarded with the Gold STARS rating by the Association for the Advancement of Sustainability in Higher Education in recognition of sustainability best practices implemented in 5 categories (Academics, Operations, Planning & Administration, Social Engagement, Leadership & Innovation). Claudia has been working at ACG since 2005 and was initially head of Alumni Relations & College Events. Before joining ACG, Claudia worked in leading private companies as a marketing and communications executive. She also worked for the Greek Ministry of Foreign Affairs, Department of European Affairs, for the period 1988-1992.

Claudia holds a Bachelor’s degree in Business Administration from Deree-The American College of Greece and a Master’s degree in International Relations & Communication from Boston University, US. 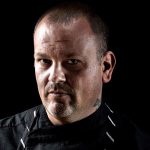 Globe-trotter and communicative, classic but modern, visionary and innovator, Dimitris Skarmoutsos is the chef who manages well in both Mediterranean and French cuisines, but also in sushi and street food. In every type of meal or cuisine, the starting point of his work is to create tasty and filling food.

Rather associated with «experimental» Greek cuisine, the chef introduces modern recipes, with respect to the Greek tradition, and focus on local ingredients, which he promotes with passion. In his hands, humble dishes like spinach with rice or a pumpkin pie go to the next level. Traditional dishes like moussaka seem innovative, while baked eggplants with lentils add an unexpected surprise to every meal.

Everything started while living in USA, where Dimitris Skarmoutsos completed his studies in economics from UCLA, and continued studying in the Culinary Institute of America. On the other side of the Atlantic Ocean, he apprenticed to world-class chefs, learned all the secrets for international cuisines and worked for top restaurants and hotels until 2000. In 2001, he returned back to Greece to focus on Greek cuisine. His move was faced with success considering the fact that while working as a chef in «Alatsi» he won the Golden Skoufos («Toques d’or») and Gourmet awards, leading to wider recognition.

His successful television career started in 2010, with prime time shows («Master Chef» and «Junior Master Chef», «Without Recipe», «Blind Taste»), establishing him as one of the most recognizable, familiar και popular personalities in Greek gastronomy. 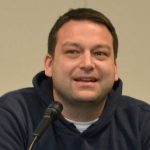 Alexander is one of the co-founders and the director of NGO Boroume (“We Can”), a leading food saving organization of Greece which since 2012 has saved & offered more than 50 million portions of food from thousands of donors to over 600 charities all over Greece and has been awarded with the European Citizenship Award 2017 by the European Parliament.

He has extensive experience in both the private and public sector, is a Marshall Memorial Fund Fellow and has received scholarships from the Friedrich Ebert Stiftung and the DAAD (German Academic Exchange Service). He has been a volunteer for various NGOs including the Hellenic Rescue Team, Junior Achievement Greece as well as a board member of Volunteer4Greece and Ethelon and a member of the advisory board of Vouliwatch.