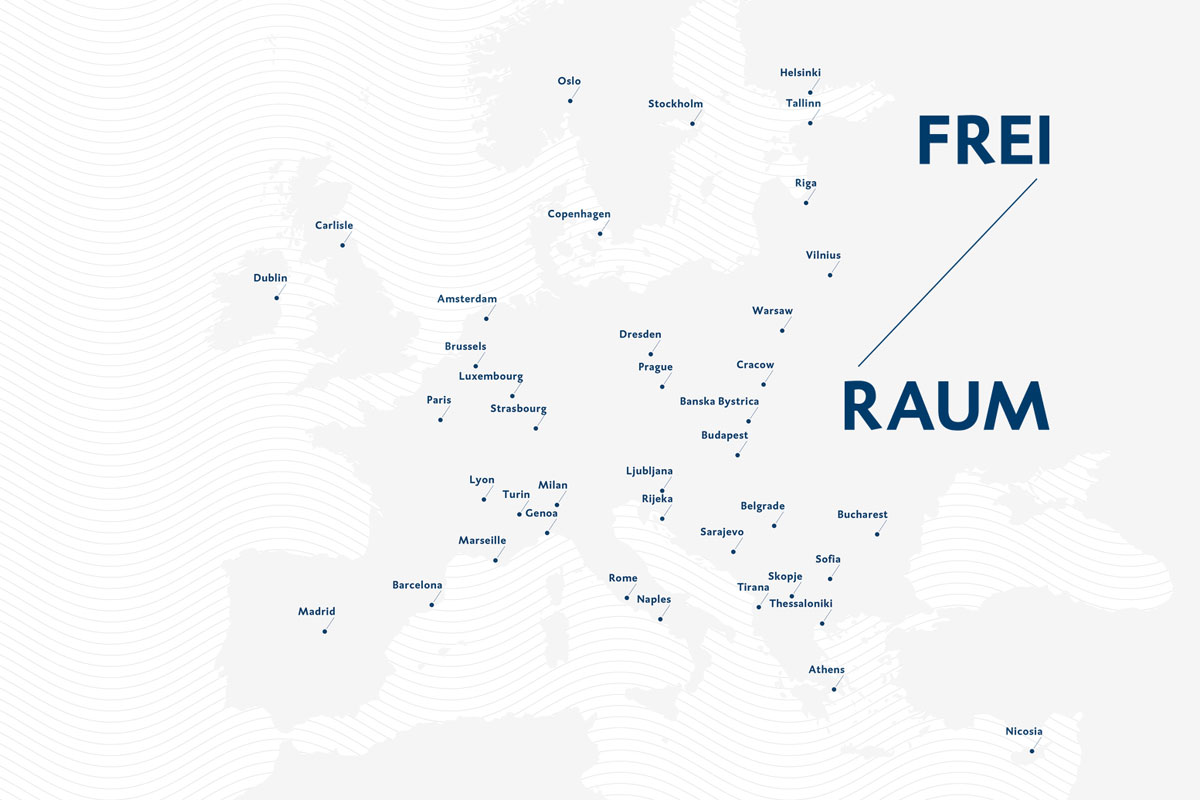 When: October 30-November 1, 2020
Where: All three days of the Freiraum Festival (30-31/10 and 1/11) are open to the public and will be live-streamed on the festival website (www.freiraumfestival.eu)

FRSFPA is participating with an intervention by Dr. Effie Halivopoulou

What is the state of freedom in Europe today? This is a question that has grown even more urgent in the coronavirus era. The Goethe-Institut together with its partners from the Freiraum platform is bringing together thinkers and people in culture and the arts from all over Europe to address that question at the Freiraum Festival from October 30 to November 1, 2020. In virtual as well as local events in Brussels, Berlin and 18 other European cities, they will be discussing new perspectives and alliances in Europe in the framework of Germany’s EU Council presidency. In addition to keynote talks by sociologist Eva Illouz and political scientist Ivan Krastev as well as various panel discussions and performances, a “Freiraum Manifesto” will be officially presented to EU Commissioner Mariya Gabriel.

Since 2017, the Goethe-Instituts in Europe have been working together with over fifty partners on the Freiraum project to explore what freedom means in Europe today. Where is freedom in jeopardy and how can it be shored up? Civil liberties are increasingly curtailed by growing nationalist and populist movements. In the wake of the coronavirus pandemic, public and private liberties in Europe are currently restricted by social distancing rules, curfews and quarantines, and closed borders. At the same time, art and culture in all its forms has never entered into people’s homes as much as now. How is the art world facing the challenges ahead, in terms of contents and formats?

To mark Germany’s EU Council presidency, the Goethe-Institut will be joining our partners in the Freiraum Platform to hold a hybrid Freiraum Festival, an open conversation about the new realities in pandemic-stricken Europe and about solidarity-based action for a resilient and inclusive society. From 30 October to 1 November, a multitude of European voices and perspectives will be coming together in Brussels, Berlin and 18 other European cities. The lineup comprises an online summit of live and pre-recorded discussions, talks and performances, which can be accessed Europe-wide, as well as live physical events in 20 European cities, from Brussels and Berlin to Athens, Turin and Prague.On October 30, after a welcome address by Goethe-Institut Secretary-General Johannes Ebert, slam poet Samira Saleh will read the Freiraum Manifesto aloud in Brussels and officially present the document to Mariya Gabriel, European Commissioner for Innovation, Research, Culture, Education and Youth. The Manifesto is a call to keep diversity alive and thriving in Europe. The Bulgarian political scientist Ivan Krastev, winner of the 2020 Jean Améry Prize for European Essay-Writing, will follow with a keynote talk entitled “’Start Worrying. Details to Follow…’ – Reflections on the State of Freedom in Europe”. In a panel discussion afterwards, Johannes Ebert will discuss with Ivan Krastev and sociologist Eva Illouz about the “new normal” in the aftermath of the lockdown. Their conversation forms part of the Neue Wir-Erzählungen debate series held by the Goethe-Institut in association with the ARD liaison office in Brussels and the German weekly Die Zeit. The focus of the series is on questions like: What new narratives about Europe can we develop collectively and tell one another? Who do we want to be, and where do we want to go together? What do we need to advance the political, economic, cultural and social agenda of the European Union and Europe as a whole?

On the second day of the festival (October 31), Eva Illouz will be opening the online programme with a talk on “Can the home provide a safe haven in a crisis-ridden world? Reflections on the political consequences of Covid19.” The sociologist and writer will be exploring “our own four walls”, the private realm often invoked as both a refuge and a prison. The Covid19 crisis in particular has put traditional conceptions of privacy, family and home severely to the test. What are the resultant challenges and how are they intertwined with the basic institutions of society? The keynote will be followed by two rounds of discussions with social scientists, artists and activists on “The Ongoing Biopolitical Democrisis” and “Social Movements & Emerging Solidarities”, including contributions by Italian writer and media theorist Franco Bifo Berardi, Italian theorist and activist Tiziana Terranova, Kashmiri writer and economist Nitasha Kaul, and New York-based British artist Liam Gillick. Among other things, they will be exploring the role of social movements, and how to generate new solidarities and alliances in Europe.

The panel discussions will be rounded out by artistic interventions and experimental performances especially made for the online format, as well as live connections with the local events held by the Freiraum partners. A duo of presenters will emcee the festival programme live from the studio.

On 1 November 2020, the online programme will resume, in collaboration with the Goethe-Institut’s Common Lab project. Under the title “State of the Arts – New Formats and Audiences”, culture and arts professionals from Europe and the United States, including Thomas Oberender, Helgard Haug, Daria Mille, Julieta Aranda and Mark Titchner, will be discussing the new challenges for the art world posed by the Corona pandemic with regard to the production, distribution, marketing and reception of works of art. They will also be assessing the opportunities afforded by new formats, ways of involving the public, and artistic representation as a form of political resistance.

In addition to the Online Summit, a number of physical events will be held in 20 European cities.

The artistic directors will present the upcoming programme and highlights

The Goethe-Institut’s Freiraum project, launched in 2017, works with 53 partners in culture and the arts, the research community and civil society in 42 different countries to assess the state of freedom in Europe.

The Freiraum Festival is co-organized by a team of curators from our partner network under the artistic direction of ArtBOX Creative Arts Management. The last day of the festival will involve the collaboration of Common Lab, an “excellence project” of the Goethe-Institut Thessaloniki & ArtBOX and TIF-Helexpo (GR).

Other projects by the Goethe-Institut to mark Germany’s EU Council presidency:

18:35-19:00
Opening address by Secretary-General of the Goethe-Institut Johannes Ebert
Presentation of the Freiraum Platform by Christos Savvidis, Director of ArtBOX, Thessaloniki, Artistic Co-Director of the Festival, representative of the Freiraum Partners

19:00-19:30
Keynote: “’Start worrying. Details to follow…’ – Reflections on the State of Freedom in Europe” by Ivan Krastev, political scientist, chairman of the Centre for Liberal Strategies in Sofia, permanent fellow at the Institute for Human Sciences in Vienna

20:00-21:30
Panel discussion: “The ‘new normal’ after lockdown?” with Eva Illouz (Professor of Sociology at the Hebrew University in Jerusalem and the School for Advanced Studies in the Social Sciences in Paris, author), Ivan Krastev (political scientist, chairman of the Centre for Liberal Strategies in Sofia, permanent fellow at the Institute for Human Sciences in Vienna) and Johannes Ebert (Secretary General of the Goethe-Institut). Moderator: Matthias Krupa, Europe editor for Die Zeit.

The discussion, which forms part of the “Neue Wir-Erzählungen” (“New Collective Narratives”) series, is co-organized by ARD liaison office in Brussels and Die Zeit.

THE STATE OF FREEDOM IN EUROPE TODAY:
THE ONGOING BIOPOLITICAL CRISIS, SOCIAL MOVEMENTS AND EMERGING SOLIDARITIES

Online Summit 14:00-19:00, Livecast on www.freiraumfestival.eu
Local events will be held in parallel in 20 European cities

14:00-14:10
Welcome address by Johannes Ebert (Secretary-General of the Goethe-Institut)

14:10-14:30
Keynote talk: “Can the home provide a safe haven in a crisis-ridden world? Reflections on the political consequences of Covid19” by Eva Illouz (Professor of Sociology at the Hebrew University in Jerusalem and the School for Advanced Studies in the Social Sciences in Paris, author)

THE STATE OF THE ARTS: NEW FORMATS AND AUDIENCES