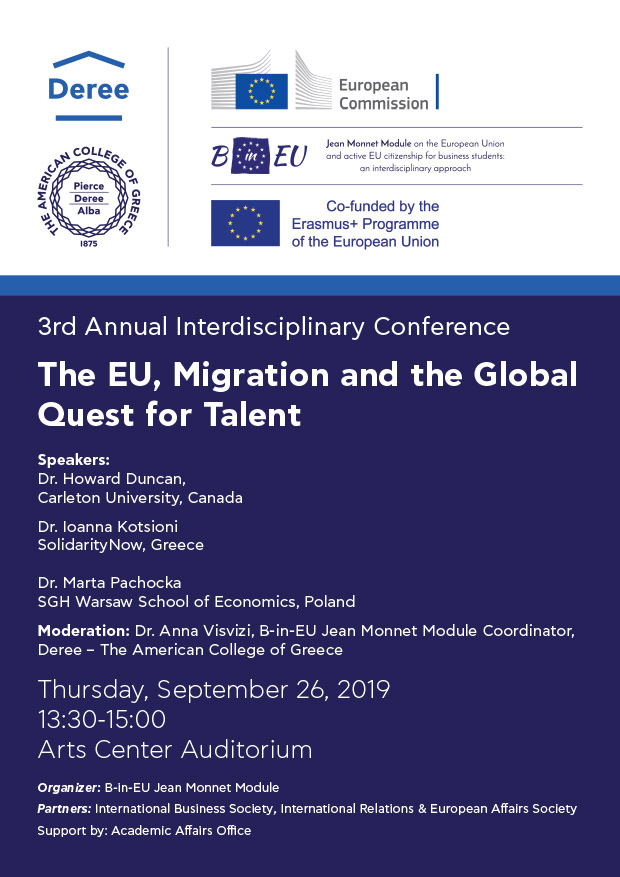 B-in-EU Jean Monnet Module is the first ever project co-funded by the European Union and implemented at Deree – The American College of Greece.

The key assumption behind the project is that through education and by equipping (business) students with skills and knowledge about the EU, it is possible to empower them, prepare them to exploit opportunities inherent in European integration and, as a result, turn them into dedicated EU citizens, advocates of European integration and supporters of more Europe.

B-in-EU is implemented at Deree – The American College of Greece, an US institution, whose proud tradition of inducing social change dates back to 1875. The objective of B-in-EU, run by Dr. Anna Visvizi, is to promote active European citizenship, raise awareness of the EU’s role in the globalized world, and facilitate people-to-people dialogue worldwide.

B-in-EU comprises of three mutually reinforcing components, including teaching, research, and collaboration. For additional information on the project, please, visit the project’s website and consult the B-in-EU ID card.

Howard Duncan, Ph.D., received his Ph.D. in Philosophy from the University of Western Ontario where he studied the history and philosophy of science. In 1997, Howard joined the Metropolis Project at Citizenship and Immigration Canada and was its Executive Head and Chair of the Metropolis International Steering Committee from 2002 until 2018. In 2012, he moved the Ottawa Secretariat operations from the Government of Canada to Carleton University in Ottawa. He was named Editor of the IOM’s journal, International Migration, in 2015 and is a member of the Advisory Council of the Century Initiative. Howard is a frequent speaker on the management of migration and integration. His most recent research has been on the role of cities in migration management about which he has written for the IOM, including for their 2018 World Migration Report.

Ioanna Kotsioni, Ph.D., received her Ph.D. from the Athens Medical School. Over the past 15 years she worked in the humanitarian field as a project manager, advocacy officer and researcher. Currently, Dr Kotsioni works as Head of Advocacy, Research and Policy at SolidarityNow. Previously, she managed activities for Doctors without Borders/Médecins Sans Frontières (MSF), serving refugee and migrant populations in the Eastern Mediterranean and the Balkans. This included setting up and running activities for the rehabilitation of torture survivors in Athens, GR, between 2014 – 2017. Dr Kotsioni worked also as a migration advisor to the Greek government during the period of structural reforms in the fields of asylum and migration. She published on the topics of migrant and refugee health, focusing on immigration detention and the health risks linked with irregular migration.

Marta Pachocka, Ph.D., received her Ph.D. in Economics from the SGH Warsaw School of Economics, Warsaw, Poland. Currently, Dr Pachocka is Assistant Professor at the Department of Political Studies of the Collegium of Socio-Economics of the Warsaw School of Economics and at the Centre of Migration Research of the University of Warsaw. She is the Coordinator of EUMIGRO – Jean Monnet Module on the European Union and the Contemporary International Migration (2016–2019) co-financed by the EU in the framework of Erasmus+ Programme. Dr Pachocka is also a Researcher in a H2020 project RESPOND on mass migration to Europe and beyond. Her main research interests are socio-demographic changes in Europe/EU; Europe/EU and international migration; EU policy on migration and asylum; immigration policy and integration policy in France; France’s international position; European economy, world economy.

Anna Visvizi, Ph.D, Associate Professor, School of Business & Economics, B-in-EU Jean Monnet Coordinator, Deree College- The American College of Greece. Dr Visvizi is a political scientist and economist, editor, lecturer, and research consultant with extensive experience in academia and the think-tank sector in Europe and the US. Her expertise covers issues pertinent to the intersection of politics, economics and ICT, with a specific focus on the European Union. This translates in her research and advisory roles in such areas as politics and economics of innovation, smart cities and smart villages, as well as politics of migration.