Hundreds of students took part in the fan and the action!

Close to three hundred (300) students participated in twelve (12) tournaments or competitions for the Fall semester 2015 Intramural program. Students had the chance to compete in tournaments as diverse as chess, ping-pong, tennis, and foosball; and in competitions such as crate climbing, archery, 3-point shoot-out, timed-climbing, and super-fit.

Twenty three students discovered the fun of Climbing on crate towers by participating in the crate-climbing event in September, while ten students participated in the 18-meter distance Archery competition in early October. The flagships of the program, 5×5 Soccer and Basketball, attracted more than 150 participants as well as many spectators, and lasted for the major part of the semester. The Basketball tournament culminated in the 3 point shoot-out which gave good shooters a chance to test their long-shot abilities. The action moved to the Swimming Pool in mid-November where the Water Polo tournament attracted a good number of swimmers while the quiet evening hours in the Sports Lounge hosted a very well attended Chess tournament. The Sports Lounge also accommodated the booming Ping-Pong and Foosball tournaments which lasted for most part of the semester and were the cause for loud cheers throughout the day. Fifteen students participated in Intramural Tennis in what turned out to be a top-performance tournament with excellent men and women players – and was won by a woman! Most of the climbers participated in the intense, Timed Climbing competition which lasted all semester and set new records on the climbing wall. Finally, the strongest men and women chose the Super Fit competition once more and competed in strength and stamina exercises. This too, lasted for the duration of the semester.

The Intramural program is of recreational nature and addresses men and women, students, staff, and faculty regardless of physical ability or sports performance. It is a great way to keep fit and join in your favorite sport without a long term commitment. The program has been around for many years and is one of the most popular. We invite all – and especially new students – to try it out. 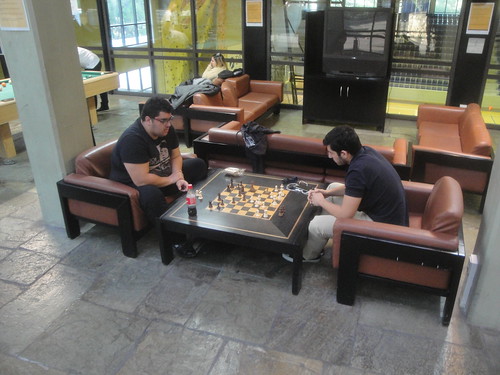