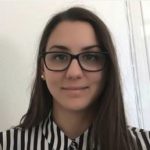 Vergina is a licensed Psychologist, graduate of the National and Kapodistrian University of Athens, Department of Psychology. Vergina holds a Master’s degree in Health Promotion from the School of Medicine at the same University, with a focus on evaluation of smoking cessation interventions in high-risk groups.

She completed an internship at the Mental Health Center of the General Hospital Asklepieio Voulas, while

as a volunteer at the Addictions Prevention Center “Pronoi” of Kifisia, she was trained in delivering health promotion interventions to school-aged children, specifically aiming to prevent addiction. Vergina has also volunteered for two years at the Psychiatric Clinic of the “Attikon” University Hospital where she acquired experience in both adult and paediatric psychiatry (2014-2016).

Vergina is a specialized educator who currently works at the Institute of Public Health – The American College of Greece, where she coordinates the “Learning to be SMOKEFREE” program of the SMOKEFREEGREECE initiative, a school-based intervention program for tobacco prevention in students of primary and secondary education in Greece.