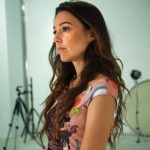 Venia Bechrakis was born in Athens in 1974. She studied painting at the Athens School of Fine Arts. She won the Onassis Foundation scholarship and continued her studies at the New York University (MFA). She received a Gerondelis Foundation Grand in 2001 and the Jack Goodman Award for Art & Technology, in 2002. Venia Bechrakis has presented her work in solo and group exhibitions in Greece and abroad.

Venia Bechraki was in the Board of Directors of the National Gallery of Greece -Alternate Member (2008-2012), Member of the Artistic Committee of the National Gallery of Greece (2008-2012), she was the Visual Arts Consultant to the Minister of Culture in Greece (2006-2009), President of the Committee for the Development of Photography Art in Greece which established “Photobiennale” in association with the Museum of Photography of Thessaloniki (2008-2009),” Manager of the Hellenic Museum Shop in the Onassis Cultural Center in New York (2004-2006), Visual Arts Consultant for the Olympic 2004 Cultural Program in the Cultural Department of the City of Athens (2004).