According to the Hellenic Statistical Authority data, an impressive smoking decrease has been documented in Greece during the decade 2009-2019. More specifically, in September 2019 smoking prevalence among adult population was 24.9% for daily smokers (more than one cigarette per day) and 3.7% for occasional smokers (less than 7 cigarettes per week). A comparison of three surveys conducted by the Hellenic Statistical Authority in 8500 households in 2009, 2014 and 2019, shows a decrease of daily smokers by 24.5% and occasional smokers by 38.3% (diagram 1). Even more impressive are the results among individuals younger than 24 years old. As it is depicted in diagram 2, the overall decrease in this age group was 52,4%, a finding positively related to the ten-year implementation of the SMOKEFREEGREECE initiative, funded by the George D. Behrakis Foundation for smoking prevention in school age children.

The Experts Committee of the Ministry of Health for Tobacco Control express their sincere congratulations to the educational community and to the successful cooperation between the Ministries of Health and Education and Religion in the field of smoking prevention. The aforementioned effort, if continued as such, will be considered the most successful in Europe and will rank Greece among the countries of the European Union that essentially pursue the goal of a total smoking prevalence less than 5% by 2040.

The President of the Experts Committee of the Ministry of Health for Tobacco Control and Director of the Institute of Public Health -The American College of Greece, Professor Panagiotis Behrakis referring to the Hellenic Statistical Authority’s (ELSTAT) Health survey, stated that the results:

Closing, Professor Behrakis affirmed that Greece meets the European Union goal for smoking prevalence reduction with great success and will intensively continue the smokefreegreece initiative implementation towards this mission. 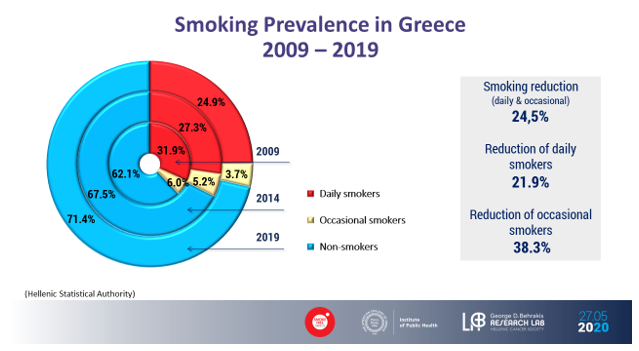 *the data of 2019 were announced by Hellenic Statistical Authority on December 18th , 2020.