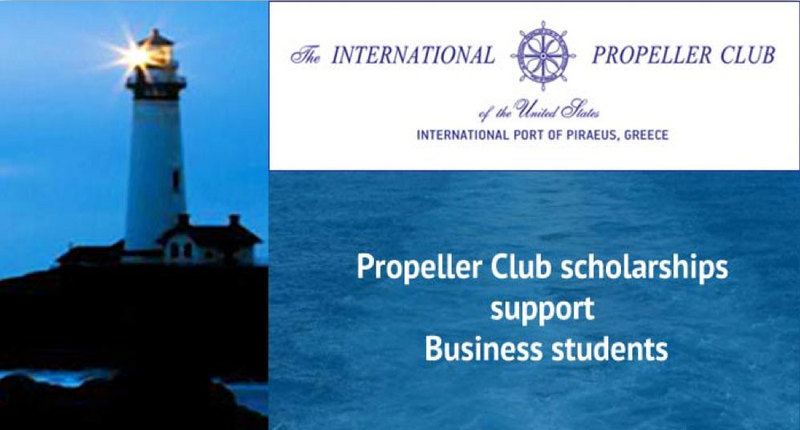 Since 1990, The American College of Greece has been the recipient of generous gifts from the Greek chapter of the International Propeller Club of the United States, based in Piraeus, for the purpose of supporting business students. In 2012 the Club designated a portion of these funds for an endowed fund at ACG that will provide annual scholarship awards to deserving students. The College will permanently manage these funds and part of the income will be used annually to support students who have excelled in the School of Business Administration. This fund will be known as the "Propeller Club Endowed Scholarship Fund". The first scholarship award will be made in the 2012 – 2013 academic year.

In addition to the endowed scholarship, the Propeller Club furthers the mission and vision of The American College of Greece by making annual awards to a qualified School of Business Administration student who is both in need and from a seaman’s family or from a family in which one of the parents works for a shipping company. This award is given during the Club’s annual Pitta Cutting Ceremony in the presence of The American Ambassador to Greece (who has traditionally been the Honorary President of the Club), C.E.O.s and top executives of Greek and multi-national firms in Greece, prominent Greek businessmen and professionals engaged in the maritime industry, ministers, members of the Parliament, government officials and senior foreign diplomats. The Propeller Award has been a driving force for a number of DEREE students and has allowed them to achieve an education that has been the cornerstone of their later career successes.

ACG President David G. Horner commented: “The American College of Greece is very grateful for this relationship and for the support provided by the Propeller Club to our students. Scholarships are essential to the College’s ability to ensure that talented students are afforded the opportunity to attain a quality education. Philanthropy has been an important part of the mission of the College since its founding in 1875. We hope other alumni and friends of the College will follow the generous example set by the Propeller Club.”

Sotiris Poulimenos, Recipient of the Propeller Award, Academic Year 2011-2012
“In difficult times having true friends to stand by you is of utmost importance. Through the Grants and Scholarships programs the American College of Greece and its generous donors, helped me pursue a better future that would have otherwise remained an unfulfilled dream.”

The International Propeller Club of the United States, is a non-profit organization founded in 1922, by professionals engaged in the merchant marine industry who gather frequently to discuss common issues and the future of shipping.

The Propeller Club strives to promote and further the American merchant marine industry and international shipping in general.

"Propeller" refers to the propulsion of ships, and is symbolic of the driving force required to achieve the Club's objectives.