customize
Home » Why Give » Gifts of Note » Many Thanks Bessie Wright Phillips! 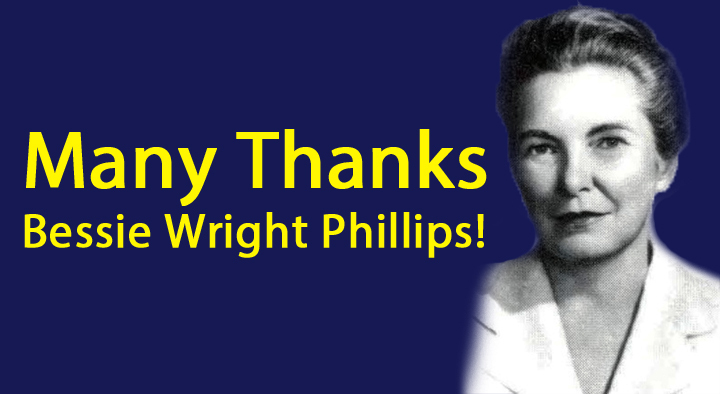 Bessie Wright Phillips was a graduate of Florida State College for Women and held a Master's degree from Mount Holyoke College. She also worked as a teacher and administrator at the Milwaukee Downer Seminary in Wisconsin, and, alongside her husband Stephen Phillips, held a long-term interest in PIERCE.

The Phillips family was a prominent Salem, Massachusetts family, which became involved in merchant shipping after the American Revolution during the Great Sailing Era of Salem.

In the mid 19th century, the Phillips family turned to politics, charity and education instead. Following his graduation from Harvard in 1929, Stephen Phillips met his future wife Bessie Wright at a retreat in New York and found that they shared many common interests, including ham radio. They were soon married, making their home in Salem, Massachusetts. Both also took great interest in helping students attain a college education. With Stephen Phillips’s death in 1971, Bessie Wright Phillips made all of her contributions to The American College of Greece in his memory, and was very active in the US as well – setting up a scholarship fund in his name, and acting upon her husband’s wishes at the time of his death, Mrs. Phillips also opened her husband’s boyhood home to the public in 1973, making it an historic museum. Click here to visit the Phillips House Site. Bessie Wright Phillips was active in the museum’s administration until her death in 1996.

During her lifetime, she was also a trustee of several educational and cultural institutions, including the Orme School in Arizona, the Peabody Essex Museum in Massachusetts, the Penobscot Marine Museum, and the 7,000-acre Stephen Phillips Memorial Preserve in Maine.

Through her own lineage, she was also a member of the National Society of Colonial Dames.

Former ACG President John S. Bailey dedicated the ACG Pool in 1993. It is a heated Olympic-size 8-lane pool (25x50m), totaling 1,250m². The US Olympic swim team trained at the pool during the Athens 2004 Olympic Games.

A removable rendered PVC membrane dome allows the ACG community to participate in various swimming programs throughout the year. The swimming pool can be used by students, faculty and staff, but also by the wider community, including alumni and guests, who can join the Swim Academy as young as four years old!

The ACG Pool was largely funded by Mrs. Bessie Wright Phillips, but also by Mr and Mrs Terry Tsafos, and received support by several others as well.

Thank you for your support!