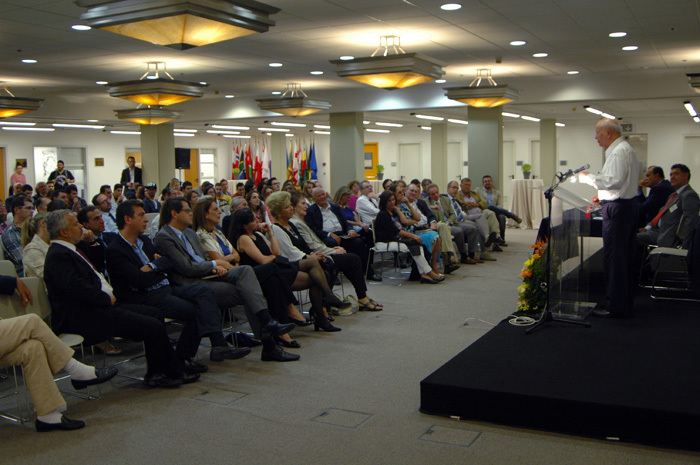 The American College of Greece once more welcomed American Hellenic Institute (AHI) Founder Gene Rossides – this time for the presentation of his book Kissinger & Cyprus: A Study in Lawlessness on October 15.

In his welcoming speech, DEREE Provost Dr. Thimios Zaharopoulos – stepping in for ACG President Dr. David G. Horner who was unavoidably detained in the US – spoke highly of Gene Rossides, who received an honorary doctorate from DEREE in 2005.

Introducing Gene Rossides himself was AHI President and Chief Operating Officer Nick Larigakis who said it was an honor to be at ACG and to reach out to the next generation, and he congratulated the ACG administration for helping keep strong the US-Greek relationship.

Taking the stand, Gene Rossides who served as Assistant Secretary of the US Treasury in the first term of the Nixon Administration (until 1973), recounted his first-hand knowledge of events surrounding Cyprus, and especially Henry Kissinger’s policies – who was serving as National Security Adviser during that period.

“Kissinger wanted to divide Cyprus between Turkey and Greece – wanted to get rid of Cyprus as a separate country,” Gene Rossides said, adding that “he was pursuing his own views regarding the world. Not just on Cyprus, a very serious foreign policy issue for the US, but do you realize that Kissinger was the main cause for Nixon pursuing the Vietnam War for four years?”

Gene Rossides recounted how he himself had ran Nixon’s presidential election campaign in ’68 in New York City, and one of the major campaign issues he was running on was ending the Vietnam War.

The book has four themes said Rossides: The first is Kissinger’s “illegal actions and responsibility” for the Cyprus tragedy of 1974 and its aftermath. The second is Cyprus’s importance as a strategic, economic, and political asset to Europe and the United States. The third is Turkey’s actions as a “rogue state,” its violations of US and international laws, its history of unreliability as an ally and its moves toward Islamic fundamentalism. The fourth is the vital importance to the United States of absolute allegiance to the rule of law.

Wrapping up, Rossides called on the US, NATO and the EU to pressure Turkey to get its troops and settlers out of Cyprus. He also called on Greek Americans to do more to pressure their government to act on the Cyprus issue.