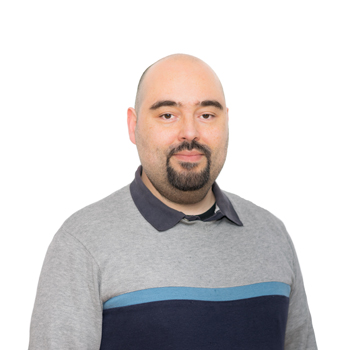 Sami Vasileios Amiris has taught applied music (jazz piano), history of jazz and blues, and music theory at Deree. He was born in Thessaloniki, where he attended Anatolia College as a scholarship student while studying music at S.O.Th. He studied Mathematics and applies the active use of mathematics in music. He studied classical piano with Dimitri Toufexis, jazz piano with Mal Waldron, and composition with Th. Antoniou and Ath. Zervas. He has played for many years with the drummer Zach Pinakoulakis, whom he credits as a source of inspiration for his deep interest in rhythm and polyrhythms. His main collaborations include Phos Duo with Antonis Ladopoulos on saxophone, and the jazz power trio NUKeLEUS, with Yannis Stavropoulos on drums and Periklis Trivolis on bass. He is the Musical Director and pianist of the Big Band of the municipality of Athens. Students of his have successfully entered prestigious Universities around the world at both the undergraduate and post-graduate levels and have launched successful careers in the music industry worldwide. He has played with many internationally acclaimed musicians like Markus Stockhausen, Bobby Shew, Dave Garibaldi, Arild Andersen, Patrice Heral, Walfredo Reyes Jr., Dom Famularo, Graig Bailey, Sean McGowan, Reiner Witzel, Ron McClure, etc., and with most of the important musicians of the Greek music scene. His interests include programming, mathematical music theory, microtonality, and complex rhythmic practices with a focus on polytemporality.