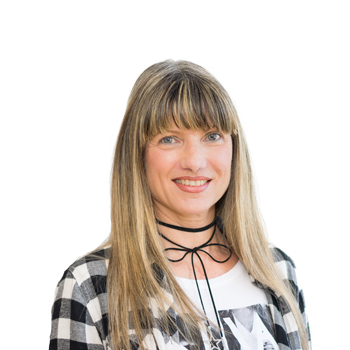 Mariella Antoniadou joined Deree – The American College of Greece in 1985. She currently teaches three Writing Program courses; Introduction to Academic Writing, Integrated Academic Writing & Ethics, and Academic Writing and Research. She has also taught courses in the English for Academic Purposes Program. From 2001 – 2010 she was responsible for the operation of the DEREE Writing Center at the Downtown Campus in collaboration with the Writing Center Coordinators. As senior tutor, Professor Antoniadou contributed in selecting, training and supervising tutors and student assistants.  She has also presented several study-skills workshops for first-year students.

Ms. Antoniadou holds a Ptychion in English Language, Literature and Linguistics from the National and Kapodistrian University, and has received an MA in Applied Linguistics from the University of Reading (UK). She is interested in the areas of second language acquisition, use of technology as an educational tool, writing pedagogy, and tutoring face-to-face. She is a member of the European Association for the Teaching of Academic Writing (EATAW), and the European Writing Centers Association (EWCA), and has participated in a number of conferences in Greece and abroad.