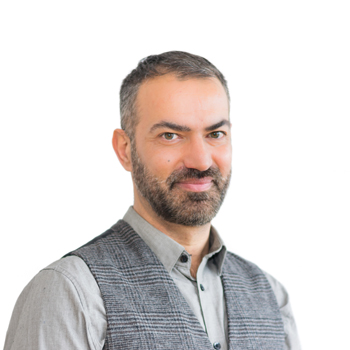 Dionisis Christofilogiannis joined the Visual Arts Department of the American College of Greece in 2014. He teaches undergraduate courses in the areas of Drawing, Color and Design and Contemporary Drawing. He was founder of Daily Lazy Projects (2012-13) and artist/coordinator of the White House Biennial (2013-15). His current research focuses in the area of painting and installation subtraction in order to use limited information of the trace of a negative, the carving of a loss, what is ultimately an optical illusion, a coating, what is left of it.

Solo shows have been exhibited at the Muzeul de Artă Cluj-Napoca; Nakagawa Gallery, Tokyo and recently in Athens, “HOME(less)” Felios Collection. Recent participated at “Victoria Square Project” by Rick Lowe for Documenta 14, “[OUT]TOPIAS”, Benaki Museum, Athens, “Tirana Open 1”, “The Kennedy Bunker” in Berlin, “Uber-Bodies” at Hydra School Projects, “The Red and White flag Project” parallel on Biennale4, Thessaloniki, “SelfConcious”, curated by Sotirios Bahtsetzis, “Civilisation (genres and cases)”, curated by Alexios Papazacharias,“Lustlands, Vol.II – On The Great Eastern (after Andreas Embiricos)”, curated by Nadja Argyropoulou and Lakis and Aris Ionas . Has also co-curated several exhibitions, including the “In the Studio” at Kunsthalle Athens, “I fought the X and the X won”, at the National Museum of Malta and Romania , “The Cutting Edge” in Romania. In addition to having exhibited widely in Greece and internationally, has also worked as a set designer in the Romania National Theaters of Timisoara, Cluj Napoca, Braila with Razvan Mazilu, and in the National Theater of Athens with Robert Wilson.